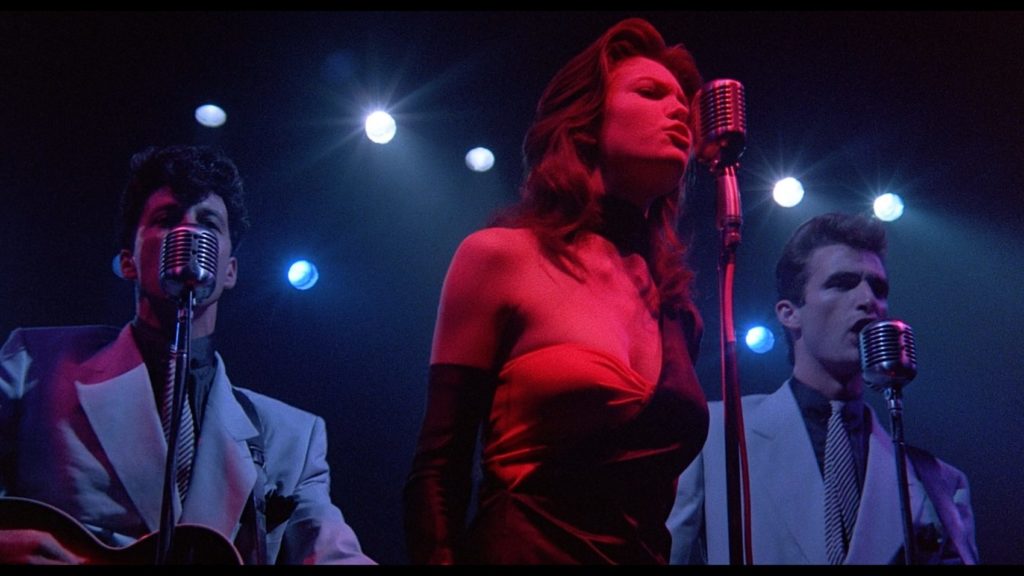 It’s increasingly clear Walter Hill really wanted to make a western. In his first few films like 48 Hours, The Driver, or The Warriors, the idea to create dark and gritty worlds with moral ambiguity was ever-present. We see characters behave selfishly, but only out of the primal need to carry out their role in the world when their lives are disrupted. With 1984’s neon-drenched teen drama Streets of Fire (subtitled “A Rock & Roll Fable”), Hill and co-writer Larry Gross had the vision to amplify everything he had been working towards in the nine years he had been making movies. Hill had said in an interview he wanted to make a movie that he would love as a teen, create a mood that was “great then and which I still have great affection for: custom cars, kissing in the rain, neon, trains in the night, high-speed pursuit, rumbles, rock stars, motorcycles, jokes in tough situations, leather jackets, and questions of honor.” Despite the poor box office, it’s easy to imagine having another teen fall in love with Hill’s fascinations.

Hill has so much passion and fun with this film, injecting every inch of style into a really easy story going in just one direction. We follow mercenary Tom Cody (Michael Pare) who is hired to rescue his ex-girlfriend, Ellen Aim (Diane Lane), a singer who has been kidnapped by a motorcycle gang. Supporting performances here are also locked into what kind of movie they’re in, particularly Willem Dafoe, fresh off of his breakout performance in Kathryn Bigelow’s The Loveless (a movie that shares a similar amount of swagger), who plays one of the gang members who kidnaps Ellen. Hiring Tom to find Ellen is Rick Moranis, who plays Ellen’s manager and current boyfriend.

It really is such a disappointment to think about the movie’s box office; Hill had ideas for a franchise, and the script turns into something so much better with Hill’s direction. It is so clearly ahead of its time, retrofitting aesthetics of the ’50s with the themes of the ’80s, that it has only been reassessed as a great film 37 years later. Starting with a performance of “Nowhere Fast” and then ending with “Tonight Is What It Means To Be Young,” Streets of Fire is filmed with the energy of a concert doc (and DP Andrew Laszlo shoots the performances beautifully). After seeing Ellen perform in the beginning and then in the finale without missing a beat, Hill suggests that Tom rescues her to correct people being out of place. Ellen is alive and ecstatic on stage, while Tom has a personal stake in this, he knows the community looses something greater with her captured.

Streets of Fire has it all in a tight 90-minute package, with Hill ultimately making the movie he wanted to see when he was a teen in the ’50s but rejecting to find its footing in a real place and creating its own. This isn’t New York or Los Angeles; it’s somewhere stuck in time, where everything is cool and a lot of people are lonely. It embodies the idea of an urban western, with so much fervor and smoke. With so much heightened style, it’s ironic we end on a fight between two guys with pick axes surrounded by a crowd and authorities standing by. Even in the streets of fire, everyone is out for themselves.