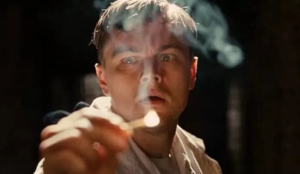 I remember snatching Dennis Lehane’s Shutter Island off the shelves at Borders Books (R.I.P.) when I was fifteen.

The movie was coming to theaters and I was taken with the trailer, the creepiness of it, the atmosphere—a foggy island, bedeviled with rain, hiding a sinister secret.

I was thrilled to catch the creepy new collaboration between two of my favorites, Martin Scorsese and Leonardo DiCaprio. To top it off, it was filmed and based in Massachusetts. I eagerly devoured the book in three days, and patiently waited for the film to pop into theaters the following month.

When it came out, I remember dragging my dad with me for one of our movie nights. We sank into our seats at Showcase Cinemas in Lawrence (also R.I.P.) and darkness swallowed the packed theater.

SHUTTER ISLAND flashed across the screen in nefarious, sharp, grey letters and immediately dropped the audience into an unsettling scene: in 1954, a small ferry emerges from the thick fog, fighting through choppy, swollen waves as bruised clouds brew overhead. Ingram Marshall’s foreboding Fog Tropes blares from the speakers.

Instantly, I was hooked.

All my nostalgia aside, Shutter Island is a brilliant flick that will chill you to the bone—and Coolidge Corner Theatre’s program, Coolidge After Midnite, is showing it for two nights where it was filmed at Medfield State Hospital.

Leonardo DiCaprio stars in the psychological thriller as Teddy Daniels, a tormented, stern, Bostonian-accented Federal Marshal that struggles with his flashbacks of the liberation of the Dachau concentration camp.

He’s investigating the escape and disappearance of patient Rachel Solando (Emily Mortimer) at Ashcliffe Hospital for the Criminally Insane on Shutter Island in Boston Harbor. With his new partner, Chuck Aule (Mark Ruffalo), Teddy begins to suspect that things are not as they appear when the patients they interrogate tell him to run, head doctors Cawley and Naehring toy with him, and the orderly and nursing staff is unwilling to help them with the investigation. 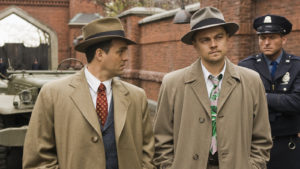 Shutter Island is my favorite Boston-based movie, for many reasons. Is my love for this film a little nostalgia-driven? Maybe, but there’s so much more to it than that.

The cast is top-notch, with Ruffalo and DiCaprio taking the lead, and other iconic actors like Ben Kinglsey (Schindler’s List), Max von Sydow (The Exorcist), John Caroll Lynch (American Horror Story: Freakshow), and Ted Levine (Silence of the Lambs) portraying chilling performances alongside them.

The soundtrack of the film is beautifully sinister. It includes a compilation of modern classical composers, such as Krzysztof Penderecki, György Ligeti, John Cage, Ingram Marshall, Max Richter, and Gustav Mahler.

Something unique about Shutter Island is that these ominous tracks are placed carefully throughout the film in non-nefarious scenes to build your sense of dread, even if there is no reason for it in the scene following—Scorsese’s ability to create this lingering fear as a backdrop to Shutter Island is one of my favorite aspects of the film.

Shutter Island was filmed completely in Massachusetts as well, creating a unique connection between Bostonian audiences and the film. The now-defunct Medfield State Hospital served as its main filming location, with places like Taunton, Easton, Peddocks Island, Nahant, and Dedham serving as additional spots.

Coolidge Corner Theatre is holding its viewings of Shutter Island this June on the grounds of Medfield State in a pop-up drive-in style setup. This immersive event is similar to their Friday the 13th showings in Rocky Woods (which I also highly suggest) and offers audiences a creepy yet fascinating spot to watch.

So, not only will you be watching a brilliant, eerie picture, but you’ll be supporting an incredible local theater and historic Massachusetts site, too.

Shutter Island will always be a favorite of mine, a nostalgic, creepy gem that I’ve grown with and always rewatch every few years or so. The writing, from book to screen, is mind-bending and fantastic, full of rich characters and imagery, and it goes without saying that the cast’s performances are nothing short of impressive.

Having first seen it in my childhood go-to (now abandoned) movie theater, Showcase Cinemas in Lawrence, I’m grateful and happy to say that my go-to movie theater as an adult, Coolidge Corner, is showing it again on the big screen.

Grab your tickets now for a bone-chilling night at Medfield State.