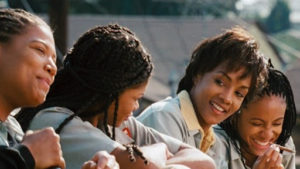 Set It Off tells the story of the lives of four lifelong best friends who all decide to begin to rob banks after one of them, Frankie (Vivica A. Fox), is fired unfairly from her job as a teller. Working below minimum wage as janitors, hey all find themselves in need economically, especially Stony (Jada Pinkett), who wants to send her brother off to college, and Tisean (Kimberly Elise), a single mother. Knowing the ins and outs of bank layouts, accounts, and procedures, Frankie comes up with a plan and they go for it. It is then that we see that these four Black women work together to get themselves out of the lives they currently live, saying they’re “stealing from the system that’s doing wrong, anyway.”

However, this isn’t without its complications. Before they decided to commit this crime, there was a bank robbery which led a detective to become obsessed with finding the culprit. So this already tells us as a neo-noir that these women were doomed from the start.

As the movie progresses, we see how the life of bank robbing slowly spirals out of control, taking many lives with it. However filled with action, comedy, and sweet moments, this is a dark film. But it does (after all the death) have a very satisfying ending. This movie is like Money Heist before Money Heist, but with obviously a completely different twist. Just look at their costumes!

It is, if nothing else, very entertaining and special. Rarely do we see the stories of Black women told, much less one of them taking control over their own lives. Can we also talk about Queen Latifah in this movie? I had always seen her in Christian movies or voice acting in kids’ movies, but never as a bank-robbing badass! Plus, she’s a total queer icon in this movie. Her performance as Cleo blew me away as well.

So, go watch the classic 35mm film at Brattle Theatre this Sunday, 9/26!