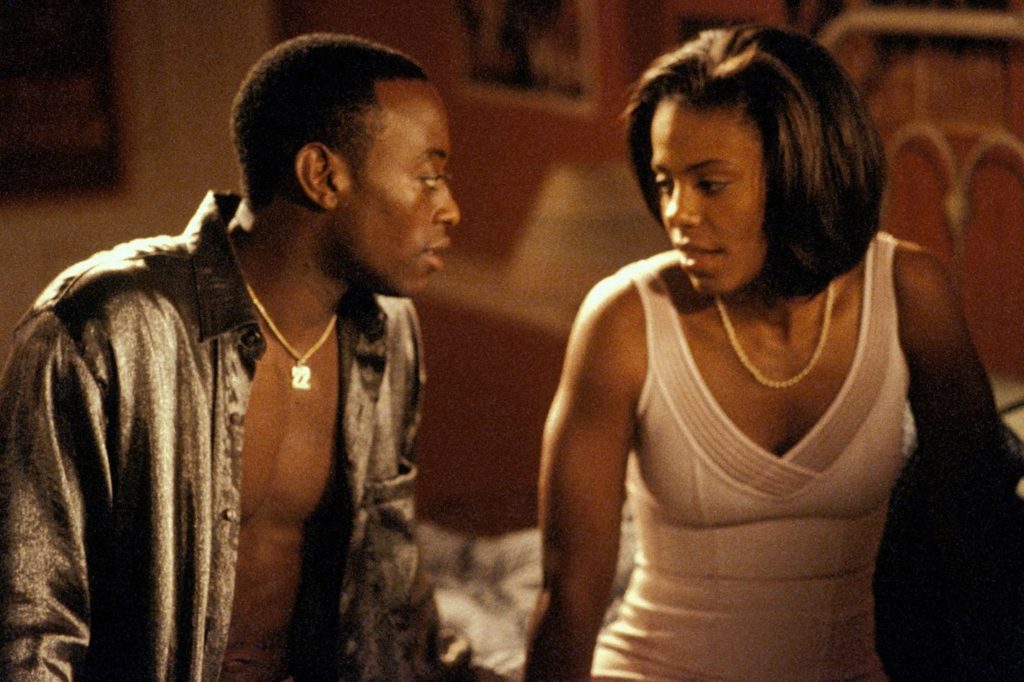 With Love and Basketball, first-time filmmaker Gina Prince-Bythewood set out to make the Black When Harry Met Sally. Though she maybe doesn’t try to replicate the firecracker dialogue of legendary writer Nora Ephron, Prince-Bythewood writes, in Monica Wright (Sanaa Lathan) and Quincy McCall (Omar Epps), people who have genuinely known each other forever, and asks if knowing a person too well can keep you from falling in love. Though their romance spans a long time, the pair is chasing after the same goals, equally ambitious and a bit directionless. Their codependency just makes sense to them as they go into college, both accepted into the University of Southern California. Monica could be the better ballplayer between the two of them, but needs to face the harsh realities of sexism in the NCAA; Quincy, meanwhile, has connections to the NBA, his dad Zeke (Dennis Haysbert) being a former player for the Los Angeles Clippers.

It’s a trick the movie pulls to convince us that Monica is without a doubt being drafted into the NBA with her undeniable talent, even with the barriers put in front of her (less than five women at the time had ever been drafted). The WNBA doesn’t have the drive-in audience of the NBA does; visually, Prince-Bythewood emphasizes this by contrasting the scale of the courts in which Monica and Quincy play (the basketball scenes are shot so well that it feels effortless to Prince-Bythewood). Girls throw themselves at an already anointed Quincy; Monica doesn’t even have her mom, Camile (the great Alfre Woodard), coming to support her at her games. All their lives they’re working so hard towards the one goal of making it big that they can’t find footing for anything else in life. That the sacrifice ultimately comes for Monica playing full time instead of Quincy shows that folks working in the world of competition risk damaging their relationships.

How well Prince-Bythewood handles the relationship damage (and damage control) is refreshingly understated. When Quincy has confirmation Zeke cheated on his mom (Debbi Morgan) he goes into a bit of an identity crisis, as he’s always looked up to his father as a role model (and something of a publicist, no less), giving him trust issues on top of immense pressure. Monica, meanwhile, is conflicted: should she abide by her strict curfew or hang out with Quincy to show support? She leaves him to be by himself, but she didn’t do anything wrong; Quincy doesn’t even know what he wants, even after thinking he needs alone time. Quincy confronts Monica not being there for him when he needed her most, and soon they unceremoniously break up. Quincy uses his fame to date other girls, without recognizing how would make Monica feel after not even doing anything nefarious. Prince-Bythwood shows how navigating the relationship dynamics between characters as fleshed out like Monica and Quincy is what makes them irresistible, and the genuine sensuality on display during their intimate scenes (particularly when they play basketball in Quincy’s dorm room) elevates their chemistry to feel perfect (it probably helps that Epps and Lathan actually dated during the filming of the movie).

“All’s fair in love and basketball,” as Quincy says a few times, which can be read a few different ways. Clearly, it’s a very clever way to name-drop the movie’s title, and a reminder to Monica of their love of the game. But I’ve always thought of the movie as more of a love story with basketball as a passionate backdrop, a life-long love that mostly comes from Monica and Quincy, but crucially with generational mistakes. Zeke desperately wants his son to pursue a proper education rather than jumping the gun right into professional basketball; his skill and the NBA aren’t going anywhere, but you get why he would want to jump right into his already-bred celebrity status. As part of a father-son duo built on sportsmanship and rarely-offered vulnerability, Zeke only realizes his toxic tendencies too late to counteract what Quincy is already prone for. Monica and Camille, meanwhile, face gender roles head-on; Prince-Bythewood leaves it a little ambiguous if Camille even likes Monica to have this deep enthusiasm for basketball, going as far as to say that “it’s just a game” when she sees Monica visibly upset about a hard loss, and even commenting that the day she went to a high school dance, that she was pressured to go on, with a date she didn’t like, meant a lot to Camille. Only in what might be the best scene in the movie do Camille and Monica lay out everything that has been on their minds, when Monica is back from playing basketball in Barcelona and Camille admits that she wasn’t ready to be a parent. The sacrifices she’s made for Monica have gone unrecognized.

Love and Basketball caps off with the final line of “double or nothing” after Quincy beats Monica in a one-on-one game for her heart shortly before he is supposed to get married. It’s the final realization they’re meant to be– as much as they want to avoid it.