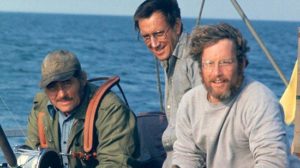 One of my earliest, most distinct memories is the first day of school in third grade.

I went to a strict, private Catholic school, and my teacher, an austere, combative young woman, sat my class in a circle and asked us to share something exciting we did over the summer. When it came to be my turn, she looked at me and said, “Alexis?”

I’d been mentally preparing my answer and was eager to share it.

“I watched Jaws,” I said proudly, a grin plastered to my face.

This prompted the circle of my fellow eight-year-olds to look at me with bewilderment, and my ever-so-cheerful teacher to say, “That’s very scary, and not very appropriate to share.”

That previous summer, at a family cookout, my younger cousin had taken me upstairs to their computer room and said, “Look what I got!”

It was a shabby, tattered VHS with a blue and white cover: a colossal shark with dead, black eyes, mouth gaping and brimming with rows and rows of jagged, razor-sharp teeth, ascends from the depths of the sea toward an unsuspecting, nude young woman. In big, bold, sharp red letters, the title read JAWS.

I had no idea what it was—but my cousin assured me that it was amazing and that our grandfather had given it to him, and told him to watch it.

My cousin popped it into the VCR and we both sat in front of the TV. Static buzzed until the picture adjusted, and I will never forget seeing the opening for the first time—the murky waters of Cape Cod, seaweed floating through the shot, John Williams’ foreboding, chilling score bleeding through the speakers until JAWS appeared in those bold, sharp letters. 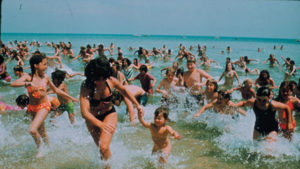 Thus started my life-long love of Jaws, my passion for movies, and my eagerness to discuss them with others.

I bought the 30th-anniversary collector’s edition in 2005, and remember bringing the DVD with me to a sleepover when I was about twelve. I carried it around like a kid would carry a comforting stuffed animal. I suggested we watch it, much to the protests of the other girls at the sleepover.

My beloved grandmother, who has since passed, used to go to Martha’s Vineyard every summer with friends and stop in Edgartown (where the film was primarily shot) to buy me a Jaws-themed t-shirt.

In 2006, I bought the book by Peter Benchley at a used book store for under a dollar (which, much to the shock and surprise of my younger self, is drastically different than the film).

As the years went by, watching Jaws with my family over Memorial Day and July 4th became a tradition; it signaled that summer had started. As dedicated, life-long Cape Cod-goers, it only seemed right to watch Jaws after a long day on the beaches of Chatham or Dennis. My dad would take me to showings where we could watch it on the big screen, and it was always a blast because the theater would be packed with people who reacted to it like it was the first time they were seeing it.

Needless to say, when you ask me about Jaws, I will become the biggest nerd you have ever met. I have a long history with the film, what can I say? It’s a strong emotional and nostalgic connection that ignited my love of cinema, and of all things scary.

For this very reason, I cannot recommend it enough.

However, setting all my connections and biases aside, I can confidently say that Jaws is iconic and considered to be one of the greatest movies ever made from strictly a critical standpoint.

It created the concept of the summer blockbuster, and even to this day, forty-six years later, it still makes people afraid to go in the water.

Brilliantly, Spielberg shot the shark’s point of view in the first person—we don’t really see our great white until the third act, thus building a horribly tangible sense of dread. 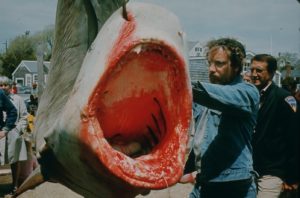 Mayor Larry Vaughn (Murray Hamilton) and a few of the town councilmen corner Brody and tell him not to make a scene of it—it’s a one-time problem, and Brody can’t prove that a shark killed Chrissie. They don’t want to scare away tourists from coming to Amity. They’re afraid that if word of a shark attack gets out, they’ll lose the money they need for the winter months.

The beaches remain open, despite a killer great white slicing through the waters—unbeknownst to the public.

After more fatalities plague the island, including the death of a little boy, Brody is determined to close the beaches. He receives more pushback from the town council, led by Vaughn, claiming that closing the beaches is unacceptable. Quint (played masterfully by the late, great Robert Shaw), an enigmatic and gruff local fisherman, offers his services to kill the shark.

Stubborn and selfish, Vaughn declines his offer and opts to keep the beaches open with shark nets and extra police protection.

Matt Hooper (Richard Dreyfuss), an enthusiastic and ambitious marine biologist from Woods Hole Oceanographic Institute, arrives and, outraged by Vaughn’s ignorance, confirms that the wounds inflicted upon Chrissie’s corpse are that of a great white shark. 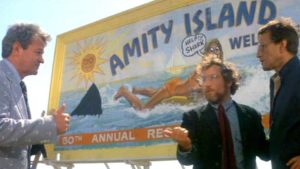 After a bloody 4th of July that lands his son into the hospital, Brody puts his foot down and goes to Quint—with Hooper in tow—to kill the great white.

Our rag-tag heroes head out on Quint’s fishing boat, the charming but dingy Orca, and into the choppy waters of Cape Cod Bay to hunt down the shark and to put an end to Amity’s bloodshed.

Jaws is a thrilling, deeply unsettling story about what may lurk beneath the surface. It’s the movie that you think about before going into the water.

At the same time, Jaws may not really be about a shark at all, but rather three men facing their fears.

That’s the heart of the film—the three men, our main characters, Brody, Quint, and Hooper. They’re a blast to watch. The chemistry between Shaw, Dreyfuss, and Scheider is utterly electric, and to this day, I can’t think of a film where I care more about its characters. Their banter, their bond, and their drastic differences—all while working together—make them some of cinema’s greatest heroes. 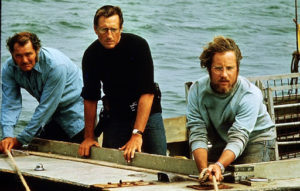 Despite its famously turbulent shooting (I highly recommend the documentary The Shark Is Still Working), the film launched Steven Spielberg into an overnight success, and John Williams’ score is a haunting, nostalgic masterpiece that’s brimming with fear and hope.

Jaws is a classic that should be watched on the big screen during the height of summer.

Don’t miss it playing at The Brattle for the 4th of July weekend—I can’t think of a more appropriate time and place to see it!

Jaws screens on 6/3 and 6/4 at The Brattle Theatre as part of the theatre’s reopening week!