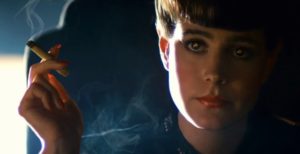 The Coolidge has some incredible showings for Memorial Day weekend, including Ridley Scott’s cyberpunk classic, Blade Runner, which will be screened both tonight and Monday.

Blade Runner is an all-time classic, from its gritty, sinister ambiance to Ridley’s fantastic storytelling. The film follows Rick Deckard (Harrison Ford) through the neon-drenched, dirty, rainy streets of dystopian Los Angeles as he sets out to terminate replicants (bioengineered humanoids) before they can cause any more damage or loss in his crumbling society. Deckard runs into a replicant named Rachel (Sean Young), and he falls in love with her, complicating his orders from his old boss.

Ridley Scott’s film is staggeringly stunning—its cyberpunk aesthetics are just as impressive today as they were back then. Blade Runner changed the look of science fiction, has influenced countless other films (such as Ghost in the Shell, The Fifth Element, The Matrix), and has been deemed a cinematic landmark.

Blade Runner is one of those rare gems that should be seen on the big screen.

Support the Coolidge this Memorial Day weekend and celebrate their re-opening!

Even as they begin to reopen, Boston’s most beloved theaters still need your help to survive. If you have the means, the Hassle strongly recommends making a donation, purchasing a gift card, or becoming a member at the Brattle Theatre, Coolidge Corner Theatre, and/or the Somerville Theatre. Keep film alive, y’all.