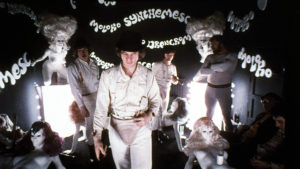 Stanley Kubrick’s 1971 cult classic envisions an enigmatic, terrifying, dystopian London where gangs rule the streets after dark. A Clockwork Orange unspools the story of Alexander “Alex” DeLarge (Malcolm McDowell) and his droogs—George, Pete, and Dim—as they beat the homeless, rape women, and fight other gangs across the abandoned wasteland of an impoverished England. When they betray him, Alex is arrested and subjected to an experimental “treatment” program for criminals while in prison, in exchange for early release. While it “cures” Alex of his psychopathic tendencies, it backfires, causing his post-prison life to dive into the darkest depths of despair.

Despite the films which have followed, A Clockwork Orange is still highly controversial. Its “Singing in the Rain” scene, among many others, still rings as one of the most disturbing movie scenes of all time. 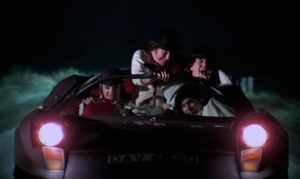 The film, for many reasons, is not for everyone—from the dialogue being spoken partially in Nadsat (futuristic slang that is a mix of Russian and English) to Alex’s outlandish demeanor to Kubrick’s zany filming style. It’s certainly an acquired taste, but once you’ve seen it, and understood it, it gets better the more you watch it. Despite its peculiarity and graphic nature, I can’t recommend it enough for its social commentary and masterful filmmaking.

A Clockwork Orange is a highly influential film as well, notably referenced in pop culture, from the band Slipknot (their masks are modeled after those of Alex and his droogs’) to The Simpsons, to Heath Ledger’s renowned performance in The Dark Knight. Without A Clockwork Orange, many things that we consider beloved in our entertainment today may not exist.

I remember seeing A Clockwork Orange when I was thirteen (like most movies I rant and rave about to you on Boston Hassle, I certainly saw it too young) and I loved it. Films from the 1970s just have a certain thing—I still can’t put my finger on it, to be honest—that is so genuine and gritty, and it’s brilliant. After watching the film, I read Anthony Burgess’ novel and watched interviews with Kubrick and McDowell about the making of the film. In college, I presented a final film project on how A Clockwork Orange reflected on society (its treatment of women, etc.) at the time of filming. 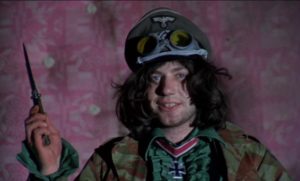 The film’s take on the dystopia, its stunning but desolate sets, otherworldly lighting, and the aspect of “gangs ruling after dark” gripped me. Not to mention Malcolm McDowell’s performance, which is nothing short of iconic, his lines dripping with smugness, charisma, and contempt. He embodies Alex, and the character has become a beloved “antihero.”

There are just some scenes in there—from the Korova Milkbar to the gang fight in the old, abandoned theatre with Billyboy and his gang—that is just pure, killer cinema. You sit and watch it and just… stare in awe. I can’t really explain it, but A Clockwork Orange is just one of those movies that you need to see.

A Clockwork Orange has been a loved classic for me for a long time, though it’s difficult when introducing new viewers to it. Often, it starts with, “It’s really strange, but brilliant, but also really strange, so, be prepared.”

Even so, I urge you to see this classic—it’s unlike any other movie you’ve seen.

Catch a bit of the old ultraviolence with A Clockwork Orange, screening at The Coolidge tonight at 11:30pm, as part of Coolidge After Midnite.