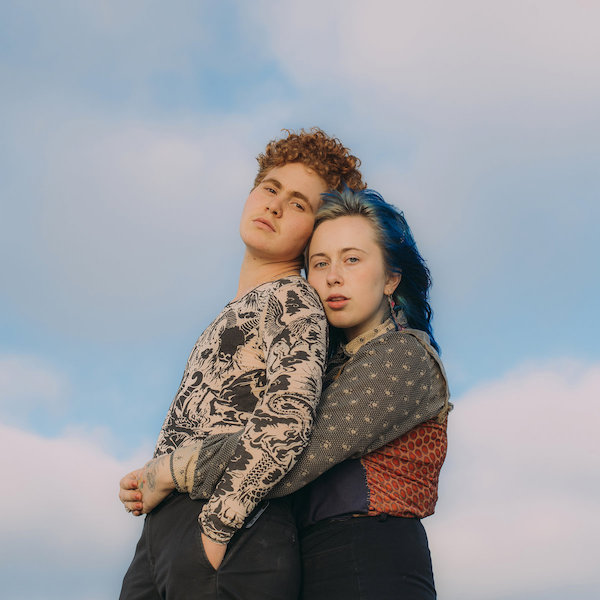 I took a wrong turn. My dash displayed 11:06 PM on a misty cool July night as I looked for a spot to pull over and pick my girlfriend up from South Station. My grey Toyota Camry eased up a torrid ramp leading to the bus pickup lot, a truly industrial cash ploy unsurprisingly placed smack dab in the center of South Station’s ghastly transportation rabble. Cleo Tucker’s comforting hush sizzled through my speakers and a slight flurry of rain met my idle windshield. I had fifteen minutes to leave the lot to avoid a fee and, just like that, I rolled out as the song took its turn.

Girlpool’s latest album, What Chaos is Imaginary defines and echoes that transient and otherwise nondescript moment. Cleo Tucker and Harmony Tividad’s signature unison vocals take on a whole new form as the band plays with an extended range of highs and lows that reckon and challenge traditional gendered treatments of voice. Tucker and Tividad’s voices now sing around each other in a wafting haze, complementing the new dark textures they weave through this gorgeous album.

Unlike previous albums, What Chaos is Imaginary takes on a distinctly brooding and sometimes anthemic air. The album opens with a wide guitar fuzz in “Lucy’s,” complemented by bit-crushed snares and deep, punchy floor toms. What ensues for the next few tracks comes off as typical Girlpool fare; guitar minded songs ebbing on folk and country territory, with a clear emphasis on storytelling– until “Chemical Freeze” fills the speakers.

Tucker whispers, “I walk tonight/in a chemical freeze/you dance marathon/quit meaning something to me.” A twangy introspective guitar riff flanks these vocals and sudden gated reverb-laden drum machines bring the slow burn to a crescendo. After the dust settles, the dreamy tone of a fingerpicked electric guitar echoes the moody tone of the previous song with, “All Blacked Out”, only to be followed by a similarly dark albeit energetic jaunt led by Tividad called “Lucky Joke.” This stretch of the album is carefully curated to lull the listener into a spiral of moody introspection only to jolt them back with an energetic rock song, all while maintaining a cohesive, dark tone.

Girlpool’s development of songwriting has turned its glance toward orchestration far more than lyrical content (they’ve already covered that base, let’s face it.) The album’s title track kicks in with lush organs filtered in from the previous track and those crunchy aforementioned electronic drums. From here on out, the album displays a new side to the band with longer songs that drone until the last four tracks, like the first four, return to the original rock and roll form of Girlpool’s earlier days. Fittingly, What Chaos is Imaginary ends with a beautiful shoe-gaze hum titled, “Roses”, curtailing a beautifully well rounded album that marks a mature tonal shift and successful risk taking from Girlpool.

After leaving the hazy rooftop lot, the rain picked up. I pulled around the block below until I found a spot, droplets sprinkling the windshield reflecting a dusky red from streetlights. In this muggy summer drive, it became clear that my rambling search for a parking spot and Girlpool’s latest work reflected a similar sense of transience, each moment fleeting and unpredictable, each song pretty and singular.