On November 23rd, as part of Praise Shadows Art Gallery’s inaugural event, local gallerist Yng-Ru Chen hosted a virtual talk with two founding members of the Guerilla Girls, an anonymous artist collective attacking patriarchy and racism through their provocative posters, installations, and talks. They work anonymously, as each Guerrilla wears a gorilla mask. The event was co-presented by Brookline Booksmith, and served as a launch party for the Guerillas’ new book, their sixth, Guerilla Girls: The Art of Behaving Badly, which “chronicles the entire history of the Guerrilla Girls: provocative street campaigns, unforgettable media appearances, and large-scale exhibitions.”

The Guerrilla Girls began creating anonymous murals and protest art in New York City in 1985, in response to the low number of female artists and artists of color with work on display in major galleries. Their goal is to both expose the understory and subtext of the art world, and to change how people view racist and sexist narratives embedded in the art world. When they are invited to present at art museums, the Guerrillas often end up attacking the institution on its own walls.

“ to combat the sexism and racism we realized was rampant in the art world. People felt art was a meritocracy,” said the Guerrilla who goes by the name Frida Kahlo (they all choose the name of a deceased female artist to honor). “We knew that wasn’t true, so we decided it was time to wake people up. To our amazement and great joy, all hell broke loose.”

“We had a new idea on how to do political art,” continued Kathe Kollwitz. “We’ve developed a way of using a headline that grabs you, pair it with an outrageous visual, and prove our case with killer statistics.”

The header image of this article is one of their most popular posters, which has been translated into several languages and displayed on buses in various cities, including Boston. “We combined with the fact that we all know painting is full of naked women, but there aren’t any female artists.” 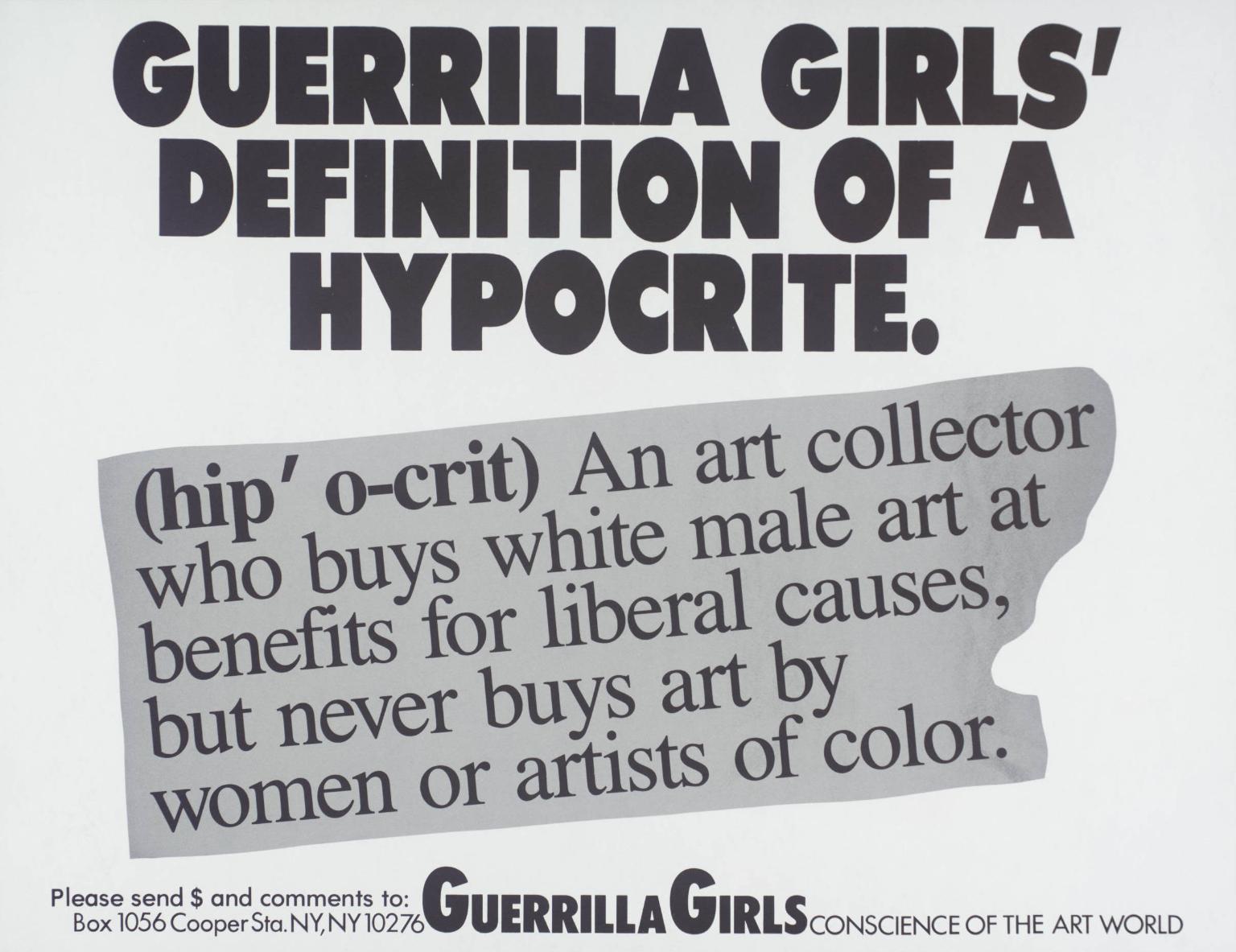 Thirty years later, the Guerrilla Girls are still “causing trouble”, as the societal problems have evolved, but have not been eradicated. “Museums are stuck with these collections of old white guys,” Kollwitz said. “They’ll never catch up , but they’ve got to try. Now there are people inside museums who care about these things, and they have agency.

“We did a book on stereotypes, criticizing museums, and we’re now realizing that the source of exclusion has to do with museum and gallery culture… how art is used in our culture. The art world is run by the super-wealthy for the super-wealthy,” Kathe Kollwitz said. “It’s built on exclusion rather than inclusion. And we know there’s great talent out there. Critics, gallery people, collectors were the driving force–not even thinking about whether the entire story was being told. Poster after poster talked about what we were not seeing, what was not there. , that’s just the story of wealth and power.”

The Guerrilla Girls explained their anonymity began as a self-protective mechanism. “We didn’t want to bite the hand that fed us in terms of getting our own art out there,” they said. “There is a long history of anonymous free speech in this country.”

They want you to think about what is on the walls, and why, and also investigate the tokenism present in “special interest’ Months like Black History Month in February and Womens’ History Month in March, and how artists of these groups are often limited to showing during these events. Is it true inclusion, or just another form of exclusion? 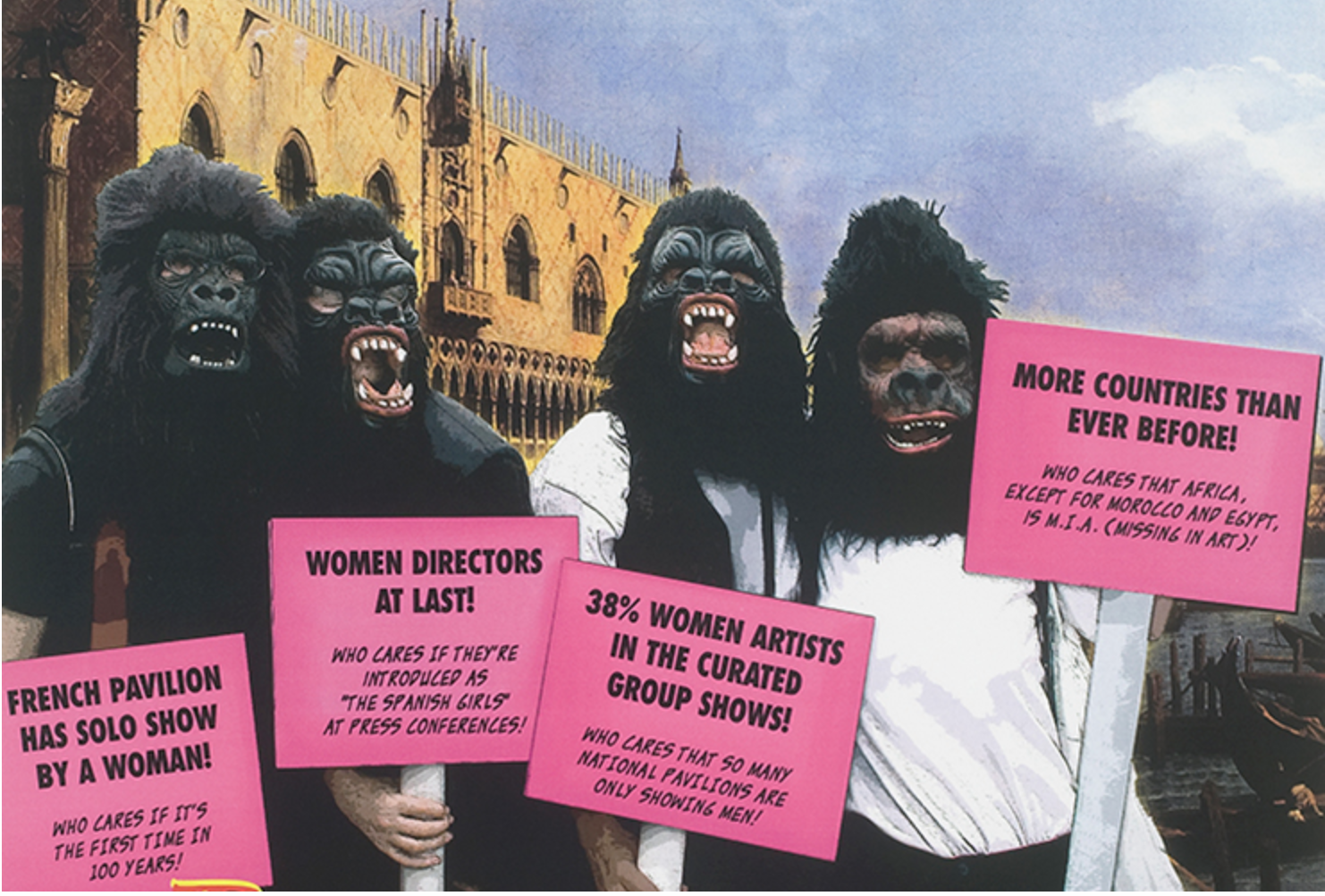 They are truly an international movement, with art installations appearing in various languages. The first was Spanish, after the Guerrillas visited Mexico City, and their art has also appeared in Chinese and Indian dialects, to name a few. On Monday night, viewers tuned in from as far away as Turkey.

The Guerrillas also use humor to their advantage, to make their message more persuasive. KK said, “ a great way to twist an issue around and get an issue into someone’s mind in a different way that lets them take the idea. There’s a subversive element of humor as a weapon of the disadvantaged against those who oppress them.” When told that all they did was complain, the Guerrillas wrote an ultra-feminine cursive note on pretty pink paper to museum curators and art collectors, informing them they didn’t display any art by women. But the little daisy at the top was frowning.

They also want to drive home, with their affordable merch like air fresheners and erasers, that anyone can be an art collector or an artist themselves. As one powerful directive, Kathe Kollwitz said, “Go to the streets. Don’t wait for the gatekeepers. Get it out there and see what happens.” 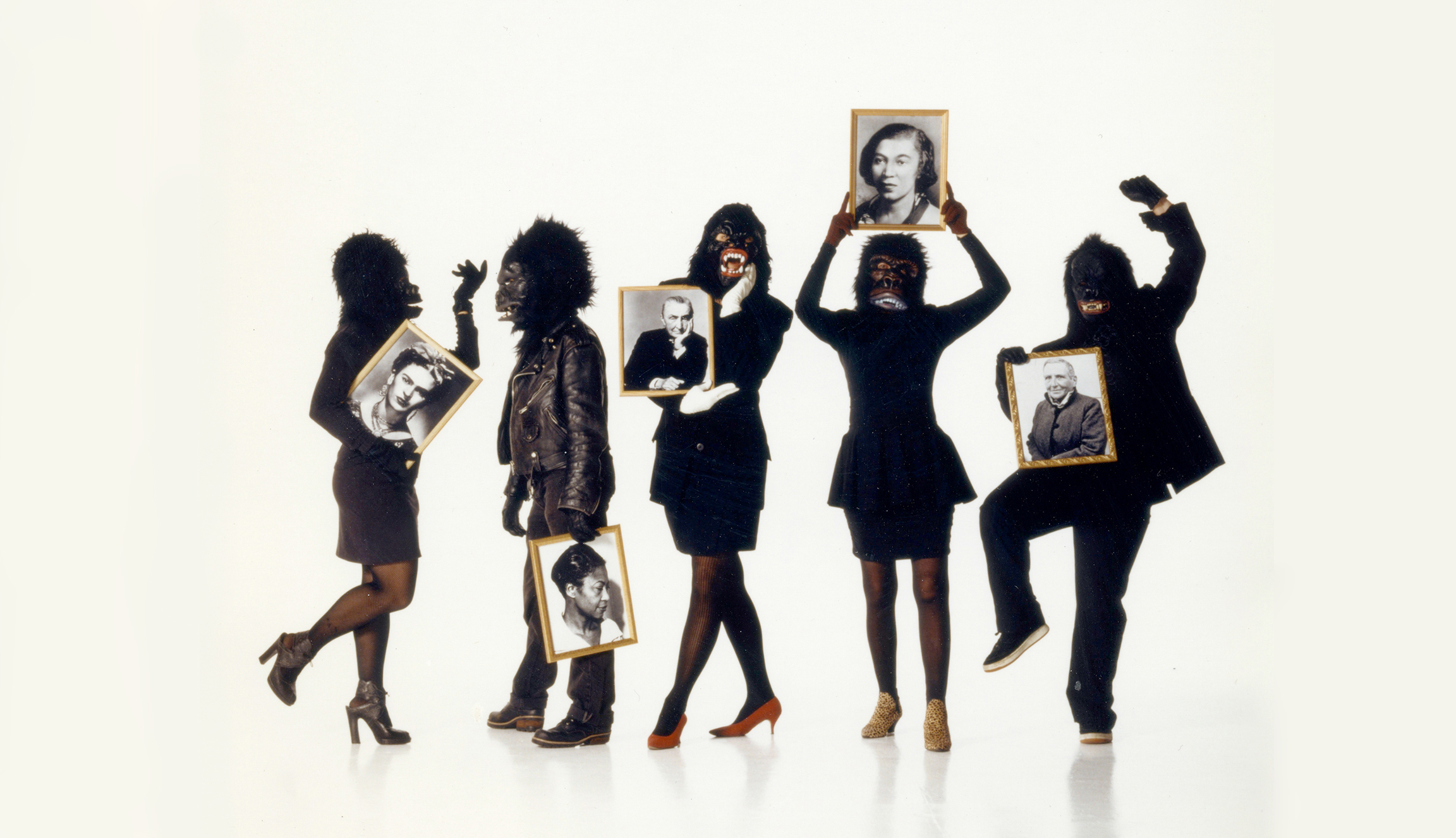 As for The Art of Behaving Badly itself, Guerrilla Frida Kahlo describes it as a collection of knowledge gleaned over the thirty years they have been working to wake people up. “You can see how the art world changed and the problems morphed,” she said. “The work has words .”

The book even comes with a paper gorilla mask that can be cut out, so you too can be a Guerrilla Girl.

Chen said Praise Shadows aims to make art accessible for everyone, and with the Guerrilla Girls’ as the gallery’s first event, the gallery seem to be making good progress towards that goal. Their space used to be a GNC vitamin shop, she said, and now as an art gallery, it gives life in a whole new way. Praise Shadows officially opens December 9th with Chosen Family, a solo exhibition by Jarrett Key.