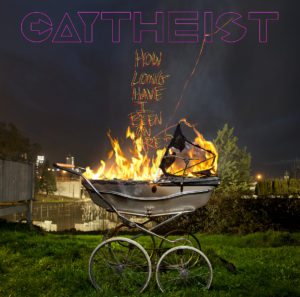 This is just what the gay atheist doctor ordered. Praise the almighty, Gaytheist is back and are shining a bright colorful light on these dark days with an absolute viral outbreak of good times. “How Long Have I Been on Fire” has gotten me through this last week of quarantine and I think it’ll do the same to you if you open your heart. Also, open up that wallet and purchase this one! Creatives all over need you to support them.

If you’re unfamiliar with what Gaytheist has been up to, you’re in for a treat. They are the undisputed best band from Portland, Oregon having reigned supreme for at least the last few years. All other Portland bands are just sniffing their farts and playing catch up. That’s not a knock on that scene either, these players are just that damned good. They distill all of your favorite parts of punk, metal and rock and roll down to a party tonic and do it all without ever feeling like they are treading worn ground. It’s all fresh, fun, infectious and it’ll put a smile on your face.

What do they do? Well, Nick Parks is basically some species of 8 armed manimal sitting behind a drum kit smashing into loud objects while keeping in perfect time and hitting as forcefully as hard economic times. Jason Rivera is a five quart tank filled with a thousand gallons of liquid personality. His guitar playing is confident and intricate and his singing matches it in skill without ever feeling like an extension of it. He’s also got a solo project called “Fill Colons” so as you can imagine, the lyrics all over this album are pretty amazing. Border Patrol has me screaming “Fuck Yeah” too many times a day. Tim Hoff is the absolute glue of glues holding the whole damn thing together and pushing it forward while never simply being an echo of the other instruments. He does his own thing but always bridges the gap to make it all feel like a song.

On this, their fourth full length, Gaytheist give you more of what you expect from their signature sound but this is more fleshed out and dynamic than ever before. The song writing has taken a good step forward and they’re able to get the most out of some of these mega riffs by fully immersing them in solid song structure with breakdowns and anthems. At times previously, they would let a good riff just be a 2 minute song but here, they’ve gone deeper into the songwriting bag than they have previously and added new layers of dynamics and really honed these tunes to get the most energy out of every part. I mean shit, I bet Shai Hulud is sitting in their van listening to this album screaming “fuck, I’m rotten with breakdown envy!”

Right from the start with “The Dark Deep” is setting the tone you’re in for an ass whooping. These hooks, these breakdowns and these sing-alongs are on point and you can feel it from the opening moments. Even the lyrics feel more balanced with some of the funnier songs being placed next to ones that feel a little more emotive. They’ve done a great job in writing 13 songs on this album that each feel substantially different, but they’ve done the best job putting them in sequence that I can’t imagine anyone not listening to the whole thing. It’s a ride and it’s a good one.

This is your mission. Go out today (ok, go ONLINE) and buy a T-Top Camero. Put on your shortest shorts and wash it in the driveway as you blast this album out of your car stereo. Spray anyone with the hose that comes within 6 feet and have the best day of your life.