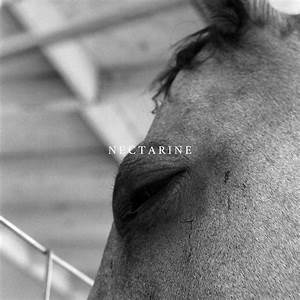 Funeral Advantage has returned with a formidable follow up to their beautiful debut full length, Body is Dead, with a wonderfully fleshed out Nectarine. What songwriter Tyler Kershaw presented on previous releases under the Funeral Advantage moniker, whispery vocals sung amongst delay soaked guitar lines and unflinching pop sensibilities, gleam through as far more refined this time around.

The album pushes forth with subtle but kinetic drum machines and soft yet dynamic
guitars. “Rinsed” starts with the aforementioned gauzy sonic clouds until natural drums crash in with a super tight 4/4 beat driving the track forward, thus setting the tone with a fast moving dream pop blast. “Black House” starts with a cacophonous sample of garbled screams that bleeds into their most pop-friendly track to date. The track sounds utterly gumdrop sweet even though the catchy chorus repeats a disdaining expletive, “I’m fucked” that stays in your head for days.

In lyrical content, Funeral Advantage tows the line between sicky sweet and brutally
honest. Kershaw sings just barely atop the mix, whispering sweet nothings and scathing
remarks all the the same. “Stone Around Your Neck” begs the song’s subject, “how do you sleep through so much but make the same mistakes your parents did?” Nectarine’s lyrics grapple with love, either unrequited or on the edge of definition, which gives the release a “breakup album” feel. Behind the wistful haze of soft synths and soothing vocals lies a darker side to Funeral Advantage: the experience and disappointment which informs the songs’ emotional weight.

Kershaw’s latest songs are brimming with loads of eclectic influences such as The Cure
(they covered 2 Late on their 2013 demo), shoegaze, and dream pop a la Letting Up Despite Great Faults, but the songs are far from formulaic or referential– quite the opposite, in fact.

Never have Funeral Advantage’s songs sounded so dynamic as they do this time. For example, Kershaw’s use of acoustic and electric drums in tandem creates beautiful moments in the opener and “Stone Around Your Neck” where the band cuts out, leaving a sparse pulse only to come back thundering with crisp cymbals and wispy guitars. Nectarine documents Funeral Advantage’s heaviest moments on tracks such as the epic mid-tempo “Bad Magnet”, which starts with a ripping guitar lead. “Take Me Down” pummels the listener with a heavy floor tom shuffle and disorienting vibrato synth textures behind the mix.

From start to finish, Nectarine is a balanced experience with no real moments of respite.
Perhaps not despite the album’s resounding sweetness in tone, moments of vigor and passion shine through. The album’s final track, “It Never Gets Better, You Just Get Used to It” sets the prior 25 minutes of emotion down to a quiet hum. It’s the moments of quiet that allow the listener to take in just how powerful this album is– and how criminally short it felt until you realize it’s been nearly a half hour and you’re sinking further into your bed, thinking about every romantic mishap you’ve made.