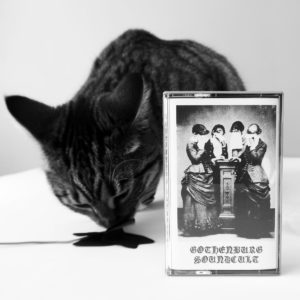 Debut from the “elusive all female constellation”. Ten interpretations of old ritual hymns, passed down from generations of cults; the members’ foremothers escaped witch hunts and went to a small island on the Gothenburg archipelago to carry out spiritual activities in peace, and this tape is a reflection on that. It ends up sounding like, at parts, a bizarre, skittering type nervousness with ticking electronics, pluming distortions, or disintegrating vocal snippets with other sounds floating by, approximates being cue balls scratching or zippers in liquid. But it all heeds in a fairly organized way. At other parts, wavering synths with the precision of the Advisory Circle and an occult dark wave mood are at the forefront, and create a seething, dark-tinted pop. If you’re intrigued by glistening runs of “Believer”, you should keep listening. 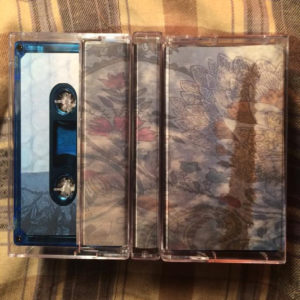 Baby xylophone swipes over belled feedbacks, coins flattening over guitar stutters, and a few level-shuttering door slams that feel like they’re coming from some tucked away farmhouse with its windows wide open. The whole thing feels muffled and abstract, like it’s been recorded in a trunk or something. On the second side, things get a little more personal, leading to mildly haywire mallet swipes, claustrophobic murmurs, and the lone guitar rattling off into a contemplative tantrum. Overall this is a mutant gospel with an odd dampness, a faint smell of hay, and an infiltrating storm breeze, all just a few shades weirder than Christina’s World. 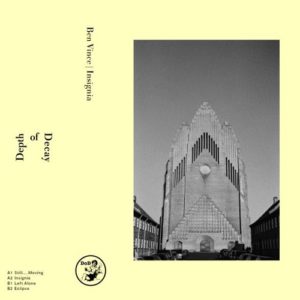 Overgrown saxophone loops, hairy but kempt. Sharp, distorted guitar sounds burrow into lower tones that sound like a cello shaking all the way through to the endpin. Mid-frequency feedbacks flare up but are eventually soothed to a lower, pure wave, the kind that goes to your spine before your ears. A lot of body shaking tremors. It’s easy to forget that these sounds are all saxophone “sourced” – some of the crazier electronic snarls are manipulated recordings of Ben’s own saxophone. It sounds like if the chapel pictured on the cover was carved into to some pocket-sized, wind and reed powered Buddha Machine that still possesses a chapel’s space, echo, and imposition. It’d be easy to allude to Colin Stetson or Battle Trance, but Vince really creates his own type of bibelot here. 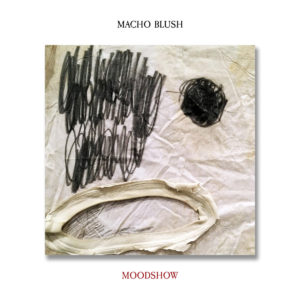 Worried, mumbled, and impusively careening Hollinndagain-type vocal exhales under, over, or around botched and abused harpsichord, grand piano, or Casio slams and trickles. Rats on banjo bodies, ferrets on cymbals, bats flapping around on the floor tom, and confessing birds hemming and hawing from the ceiling; a stampede, contained but bleeding through. With Moodshow, Gina Probst (aka Macho Blush) isn’t afraid to pile sounds on, letting ideas and cohesion come through layers. Moodshow does sidestep psychedelia though, or at least some of its bloated tendencies. One for the scavengers at heart. 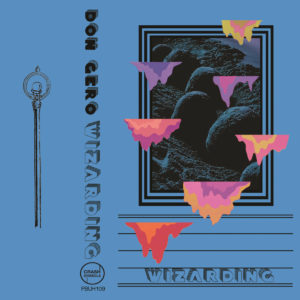 Propulsive neo-psych from the Oregon (and formerly Bostonian) musician. On first listen, you’d probably want to call Don Gero a trio, but it’s just one drummer with a host of triggers. On Wizarding, he harnesses a snowballing energy, perpetually building and blowing through things over four, three-part suites. Even when he’s syncopating parts, he offers a steady downbeat that holds the thing together and makes sure the even-keeled energy doesn’t slip away. And he does this all with a grab bag sense of melody and transition, a noisy and oddly symphonic quality somewhat similar to Lightning Bolt. Feels like chasing that high score in pinball with too much soda and sugar in your blood.