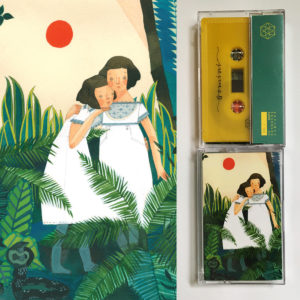 A prime sliver of American guitar drone—fizzing amp hums, small riffs with plenty of hammer-ons, a thick but thinning haze of drone hanging onto every morsel. The pair of John Kolodij (High Aura’d) and Matt Christensen (Mind Over Mirrors) started Gemini Sisters in honor of their daughters which, you guessed it, were both deemed Geminis by the stars. This smooth, sauntering MC collects seven low-slung, slow burners that take their time to fuse to your periphery before swallowing you whole, sounding something like the Dirty Three thinking really hard about the word “Zen”. “All Shanks” in particular rides out like a flood in an open field while “Hurricane Shapes” is a dehydrated, troubled trip in those ferns the twins peer from on the cover. Please, listen for your own good. 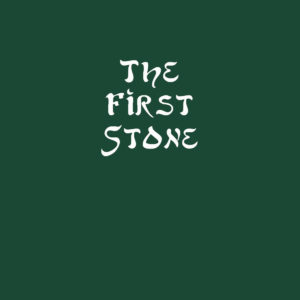 Zomes – The First Stone (Near Unison)

Zomes’ self-titled release, ten years old, pulled together 15 shorter tracks of repeated, fuzzed-out guitar riffs each with a clumped beat plopped in the middle. The baby of Lungfish’s Asa Osborne, it sounded like your big brother’s secret demo, the one buried deep in the couch, caked in Doritos dust, and plastered with the little digs he shelled out before he himself got plastered, strapped on his jammy-pac, and kissed off. Each release since has pulled in other elements but has the spaced-out yet grounded loops have been held close to heart. The First Stone somehow feels the most like that first Zomes release in sound, but this missile is cleaner. It’s moved out of the basement. It gave up hard-snacking and shaved off the fuzz. But through its more transparent, leaner tones, you still hear the squares be rounded, the corners cornered. The First Stone does what Zomes does best: clear the space for you to drift to its geometry. 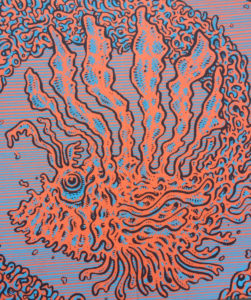 A calming rattle of seashore debris, bells and shells, open the tape along with a series of open acoustic guitar strums. Once the lionfish’s neurotoxic venom starts tracing the bloodstream though, you realize this isn’t a new age folly but a psychedelic bout of two guitars tying their strings together and picking out some vibrant wedges. The story goes that electric guitarist of the duo that is Elkhorn, Drew Gardner, reached out to a mesmerizing lionfish mid scuba dive. This eventually led to experiments with the aqua life’s venom over a month or so until Drew Shepard, the 12-stringer of the two and noted son of a pharmacist, made it into powdered form, perfect for snorting. Both “Lion” and “Fish” come from timed experiments, set up so that the highest high would hit at the same time as peak jam time. Maybe the whole lionfish story is a metaphor, a way to get the gabbing going, but the mystique and supposed psychoactive powers of its venom provide a heavy bit to chew on, a little out-there imagery perfect for framing these colorful, loose ramblings that blow past your ear like an afternoon breeze. 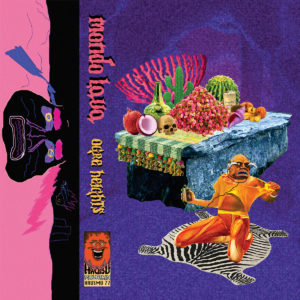 Like the Meridian Brothers if they split their brains. Or Shuggie Otis or Mulatu Astatke on pills, with a belly full of ceviche. Every instrument feels like it’s on its drugs, maybe some sort of downer/psychoactive mix. Breathy melodies surrounded by liquid Tropicalia-inflected electronics, that swish around with black magic logic, and pinned by down by a low-heartrate rhythm box and bass line. Welcome to one of the many layers Hausu houses in its mountain, this may be the most colorful one yet.