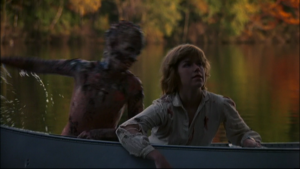 It’s dark in the thickening woods. You’re sitting on a blanket, huddled in tight, as Friday the 13th is projected on the screen in front of you. It’s a warm night and the crickets are chirping between the trees. You’re tucked safely on the outskirts of a pond that is eerily similar to Crystal Lake…

If you’re interested in a highly immersive experience like this one, check out Coolidge Corner’s double feature presentation of the original 1980 Friday the 13th and the 2009 remake. Both films, packed with horror, a tiny bit of comedy, and a whole lot of campiness, are a must-see, especially in Rocky Woods in Medfield. It’s a crazy, fun, creepy, and rare event that horror fans would kill to experience.

The original Friday the 13th, made in 1980, opens with a gruesome murder of two camp counselors in 1958. Fast forward twenty years,  to the story of a new owner and a crew of eager, free-spirited teenage camp counselors who aspire to re-open Camp Crystal Lake, where a young camper drowned and a massacre happened many years prior. Not listening to the locals’ warnings of the camp’s grisly past, the giddy counselors go on with their plan to re-open the camp. Little do they know, a maniac lurks between the trees, waiting for sundown…

Marcus Nispel’s 2009 remake opens with a group of young backpackers who are on a camping trip, looking for marijuana. In the film’s intense thirty-minute opening scene, each backpacker is picked off, one-by-one (gruesomely: machete in the head, hung upside down above a fire in a sleeping bag, bear-trapped, stabbed through the legs from below) by a machete-wielding Jason Voorhees– except for one, a young woman named Whitney, whom Jason takes hostage.

Weeks later, Whitney’s brother, Clay Miller (an early Supernatural-era Jared Padalecki), goes searching for her in Crystal Lake, after she misses their mother’s funeral. En-route, he butts heads with Trent, a local frat boy, and his group of friends as they head up to his lake house situated on the shores of the lake. As the night grows darker and Trent’s girlfriend, Jenna, helps Clay try to find Whitney, they realize they’re being hunted by Jason.

Both films are the perfect camp and great preparation to get into the Halloween spirit – it’s never too early! Don’t miss this awesome showing in the Rocky Woods.