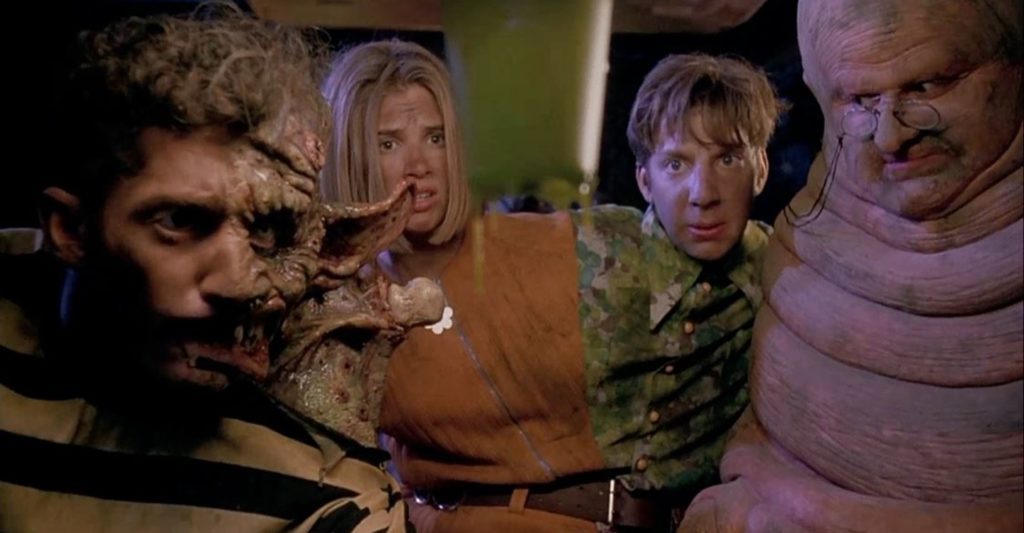 There was a time, before I was old enough to appreciate it and probably before many reading this were born, that “MTV” was an aesthetic. In the heady days of the early ‘90s, the network had already started to drift from its original “Music Television” mandate, but was still years away from the Teen Mom/Jersey Shore axis of vacuity that would come to dominate its programming. During this transitional period, MTV was, for a time, defined by an aggressively colorful, “in-your-face” visual sense, underscored by a snottier-than-thou sense of humor. The standard bearers during this period were, of course, Beavis and Butthead, but this sensibility manifested in an entire slate of even stranger shows, including the animated Aeon Flux, Liquid Television, The Head, and The Maxx, and such unclassifiable music/variety programs as 120 Minutes and Oddville. From today’s vantage point, this era of MTV looks stunningly refreshing and original; at the time, people were mostly annoyed that it wasn’t music. Hindsight, as ever, is a blessing and a curse.

MTV put out a few films themselves during this period– Joe’s Apartment and Beavis and Butthead Do America come to mind– but there’s no better cinematic example of this particular moment than Freaked. Directed by Alex Winter (forever best known as Bill, of and Ted fame) and Tom Stern, with whom Winter co-created the short-lived MTV sketch comedy show The Idiot Box, Freaked is, by turns, silly, gross, obnoxious– and kind of amazing.

Winter stars as narcissistic former child star Ricky Coogin, who signs a contract to promote an experimental radioactive fertilizer for a clearly evil corporation. Traveling to South America to visit the factory, Ricky takes a detour to a freak show run by one Elijah C. Skuggs (Randy Quaid), who naturally uses the fertilizer to turn Ricky into a cartoonishly exaggerated Elephant Man-type character and insert him into his act. Realizing the error of his ways, Ricky teams with the other freaks, including the Bearded Lady (Mr. T in a dress), Sockhead (Bobcat Goldthwait under a sock puppet), and Ortiz the Dog Boy (an uncredited Keanu Reeves, in what may legitimately be my favorite performance of his ever) to try to find a way to unfreak himself.

That plot description was difficult for me to piece together, not because it’s especially complicated, but because it doesn’t matter. The point of Freaked is to cram in as many gags as humanly possible, a sort of live-action equivalent of a MAD Magazine crowd scene. The jokes range from the pop-cultural (the story is framed by a talk show hosted by Brooke Shields) to the non sequitur (Ortiz at one point launches into a full-on Hollywood Squares parody, complete with the skeleton of Paul Lynde) to the inexplicable (Skuggs’ henchmen, a pair of anthropomorphic, dreadlocked eyeballs called Eye and Eye). A big part of the draw is the makeup effects (including work by Tony Gardner and Society’s Screaming Mad George); the creatures don’t look realistic, per se, but each one feels like a sophomoric notebook doodle come to drooling life. In these days of CGI overload, there’s something immensely appealing about a film packed with foam-and-latex monstrosities.

Make no mistake: Freaked is not a subtle film, and far from everything works. But its snotty, everything-and-the-kitchen-sink approach is immensely appealing, and more often than not it feels like watching a procession of inside jokes from a group of your weirdest friends. Add to this a time-capsule oddball hard-rock soundtrack including Henry Rollins, Mr. Bungle, and the Butthole Surfers (the latter of whom at one point were attached to star!) and you have perhaps the perfect specimen of a long-lost strain of outrageously weird American humor which, for a brief moment, nearly breached into the mainstream. Floribama Shore might have more viewers than The Idiot Box ever did, but it has far fewer human-bovine “cowboys.”