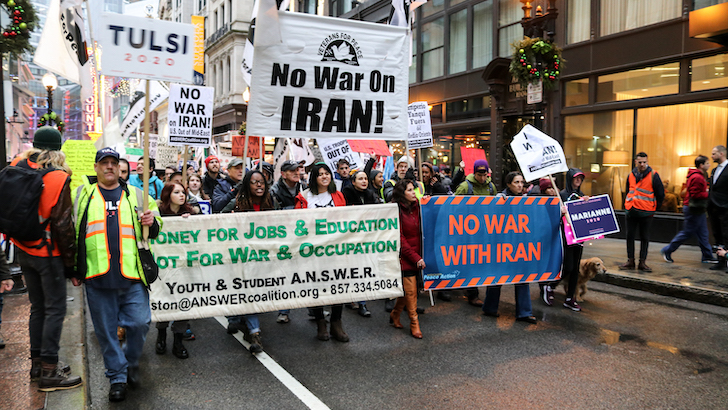 “I arrived with around 15 organizers and supporters from the ANSWER coalition by around 8:15 pm. By then, hundreds of people were outside of customs rallying and chanting,” said Husayn Karimi, an organizer with anti-war group ANSWER Coalition. Dehghani, who holds a student visa, was deported Monday night despite a court hearing scheduled for Tuesday.

Since President Donald Trump ordered the assassination of Iranian military commander Qasem Soleimani, effectively setting the stage for a conflict with Iran, US Customs and Border Protection and police departments across the nation have boosted security. The Boston Police Department announced in a Jan 3 statement: “We will increase patrols to protect the city and the people that live in and visit our great city. … We continue to work with other law enforcement partners to keep our city safe. As always, we remind people to say something if they see something suspicious.”

“I think that police departments have announced these extra patrols as a symbolic act to signal to people who are already feeling worried that there may be some attacks from the enemy of the day that the police are on top of it,” Marthews said. “It’s advantageous for the police to do this because if they announce extra patrols … it provides a way for police to use overtime in a way that probably will not result in risky situations for police officers.”

At the Straight Pride Parade in August 2019, hundreds of BPD officers worked the event and racked up 9,000 overtime hours. They used pepper spray excessively and arrested 34 protesters. Marthews noted that larger patrols do not demonstrably result in an increase to public safety.

Calls for increased security in times of international conflict have echoed for decades. Following 9/11 and the onset of the so far endless wars in Iraq and Afghanistan, an attempt at more effectively intersecting state, local, and federal law enforcement and intelligence fronts yielded the creation of the Department of Homeland Security, regional fusion centers, and a Muslim registry, among other measures.

“If you look back to … 9/11 and the Iraq and Afghanistan wars … what’s really important for folks to understand is there’s so much that happened then,” said Fatema Ahmad, executive director of Muslim Justice League. “What we’re seeing now is we accept really horrific things in response to incidents like this. And we let them happen and then they become normalized and the police are able to build off of them.”

At fusion centers like the Boston Regional Intelligence Center, or BRIC, police departments are supposed to share critical notes with those watching bad actors elsewhere. There are more than 75 such entities nationwide, including two in Massachusetts (BRIC, and the Department of State Police’s Commonwealth Fusion Center (CFC), which “operates within the Criminal Information and Intelligence Section of the Massachusetts State Police, under the direction of the Executive Office of Public Safety and Security).”

“The issue that they rapidly found was that there’s just not that much terrorism,” Marthews said about BRIC, which operates out of BPD headquarters. He continued, “And certainly not enough terrorism to keep 80 state-based or regional agencies operating full time.”

In the past decade, Fusion Centers have expanded their purview beyond traditional terrorism, in some cases using their power and position to gather suspicious activity reports. According to Marthews, suspicious activity can include financial or social media-born red flags, or in certain cases people calling to say that they saw something. Even if the information isn’t related to a criminal case, it remains in the center’s database—there’s apparently no process for removing information that is inappropriately held or inaccurate.

“There is a large number of people … who have files on them in the Boston Regional Intelligence Centers’ databases who may never have done anything criminal or may not have been suspected of doing anything criminal, but who are simply conceived of as being threatening in some way.”

It’s hardly news that police departments across the country have a habit of funneling people of color into the criminal justice system. Or that there is a well-documented white nationalist problem in many departments, along with a discrepancy between how police perceive threats from black and brown people and how they view comparable behavior by white people.

“White nationalist discourse online does not seem as alien as ordinary African American discourse online or ordinary Muslim discourse online,” Marthews said. “Something which would be innocuous within that context does not get taken as innocuous. If you look at these Boston Police Patrolman Association newsletters, then there are overlaps in vocabulary with what you see coming out of some of these extreme groups.”

The police have helped create an air of panic motivated by racism, according to Ahmad of Muslim Justice League.

“Any time they’re talking about increased patrols in relation to an incident like , it means not only the police doing more racial profiling, but I think it also encourages other people … to do that because it’s kind of putting people on alert that they should supposedly look for suspicious people,” Ahmad said. “It’s very like see something, say something, which we know impacts Muslim folk and those who are perceived to be Muslim in particular.”

Put simply, Karimi of ANSWER Coalition said that BPD is using US aggression towards Iran to justify increased patrols for a nonexistent threat.

“Increased patrols do not protect anyone,” Karimi said. “In fact, they are actively harmful to poor and oppressed people who are routinely harassed, brutalized, and surveilled by the police in Boston and across the country. We should recognize this as an attempt by the police and state department to instill fear in Americans by painting Iran and their people as an enemy and threat rather than our very government that has brought us to the brink of war that would have catastrophic consequences.”

Photos by the Author

Olivia Deng is a Boston University graduate and journalist in the Boston area and has written for publications including the Atlantic, HuffPost, and Spare Change News.