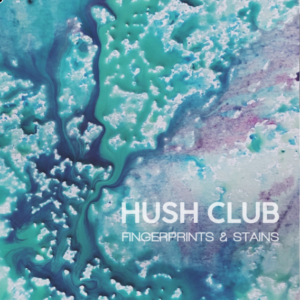 Somerville-based indie psych band Hush Club released their album Fingerprints & Stains, a beautiful progression of sweet surreal sounds, on November 12, 2021. I met with the trio at Andala Coffee House in Cambridge to chat about their recent release.

The band formed in the spring of 2019, and their musical chemistry and interpersonal compatibility led to the bandmates soon becoming roommates. While quarantining together in 2020, the group wrote and recorded most of the songs for Fingerprints & Stains, and the time and space that they were able to give to this project shines through in the polish of the finished album.

Liz, Alasdair, and Chris co-wrote and co-produced the album, and Alasdair handled the recording, mixing, and mastering. The only outside musician to make an appearance is Cody Nilsen, Boston Music Award nominee for Session Musician of the Year, who plays pedal steel on “Altitude.”

Fingerprints & Stains showcases Hush Club’s encompassing yet gentle sound; it’s music from the milky way. Using pop song structures paired with expansive, expressive textures, this album is reminiscent of George Harrison’s All Things Must Pass. The compositions are musically simple but emotionally rich, eliciting introspective thoughts and strong feelings even when no words are sung.

Hush Club’s music has to be felt to be understood, so don’t just take my word for it. Listen to Fingerprints & Stains on any major streaming platform, and let the music speak for itself.