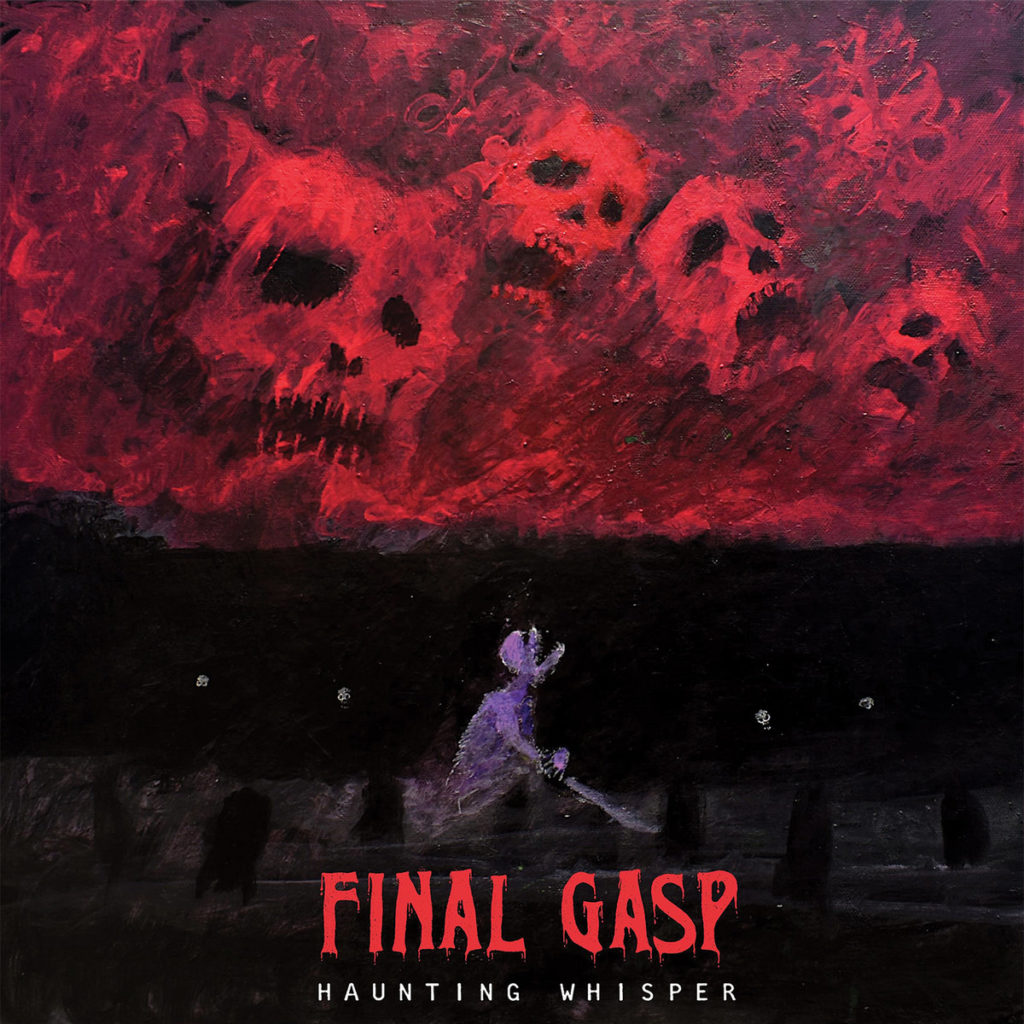 The chime-synths and the dark ambience of reverbed guitars might fool you into thinking so, but no, this isn’t Danzig’s return to darkness after last year’s collection of Elvis covers. This is Final Gasp, Boston’s own punk and deathrock mash-up delivering their new EP, Haunting Whisper.

Haunting Whisper is a heavy album with hints of hardcore, metal, and punk all blending together at varying ratios across its five tracks. The band also uses some keyboards and guitar effects that might be more familiar to gothic rock than punk or metal. With all of these influences present, there’s a well thought out variance across the album. Each track feels like a new song idea rather than something rehashed or already used (a problem encountered frequently in punk-derived music). Their songs tend to be more complex than the average horror punk 2-minute kick, especially on tracks like “Suicide” which features a lot of atmospheric tones and a spaced out, anarchic structure.

For as much as this album is inspired by Danzig/Samhain/Misfits, it’s somewhat of a surprise to jump into the first track and find a chorus of ambient synths. We can probably ditch the Danzig comparison completely if “Descending / Burning Body” is any indication of how the rest of the EP behaves. The only real nagging similarity is in the vocal performance which, although it covers ground outside of what could be expected from Danzig himself, still shares that immediately recognizable sonority credited to the punk rock crooner. To vocalist Jake Murphy’s credit, his performance is a convincing one, especially on “Screaming Heaven,” where he displays an impressive amount of power and control. Maybe it’s not fair to make such a relentless comparison, but since the genre is a match and this sound is fairly idiosyncratic (that is, obviously attributable to a certain origin band,) I think it needs to be addressed prior to moving forward. There are similar sounds there, yes, but Final Gasp certainly injects a novel character into the familiar style.

The title track, “Haunting Whisper,” is the obvious favorite, with a driving tom beat that propels each verse towards the strange stop-start feel of the chorus. It is clear why they chose to release this song as the single—it draws people in, and has an urgency to it that catches listeners even if they only hear it for a moment. It’s just a shame that the transition from the intro is lost when “Haunting Whisper” is listened to as a stand-alone. “Descending / Burning Body” really creates a disconsolate aura that merges into the punk/metal of later tracks, giving the release a more complete voice and a personality aside from its prevalent influences. “Descending…” also sets a precedent for the slower shambles in “Suicide” later on, creating that second bookend that encapsulates the album nicely. Well, as I consistently recommend people, listen to the full album from start to finish at least once. You probably wouldn’t just look at the corner of a painting and say, “Wow, I like this corner” right? Hell, maybe you would.

As far as originality goes, this band will probably continue to be dragged for their clear influences. However, it’s my opinion that on Haunting Whisper they mark their own original territory. For me, the more they inject those death rock and hardcore tonalities into their music the better. These are a part of their identity that we saw much more prominently on Baptism of Desire, where they inhabited a frenetic sort of deathrock guitar sound that clearly distinguished them as their own raucous animal. Haunting Whisper has these, but to a lesser degree and with heavier riffing that pulls them away from that jumpy, punk vibe.