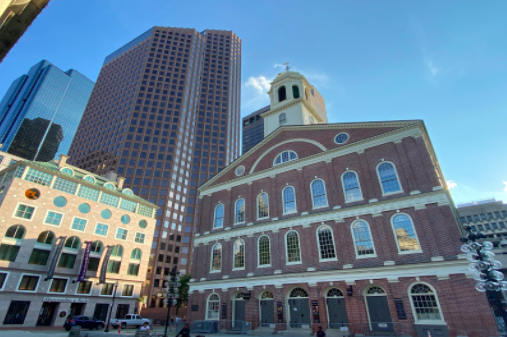 When you walk through Boston, one can easily stumble upon one of Boston’s most famous landmarks, Faneuil Hall. This building holds public events and meetings, though carries a long history of so much more. The historical upbringing of such a landmark in the very heart of the Hub deserves a form of recognition, especially in a time where a lot of societal issues and historical landmarks are being reexamined for their past.

Nephew to a wealthy merchant, Peter Faneuil inherited the riches of his uncle after his death in 1738, making Peter one of the wealthiest merchants in Boston overnight. With this, Peter gained riches in other forms such as trading raw goods and more notably the African Slave Trade. His efforts towards the creation of the hall came with his foundation of “the lack of a central public marketplace” in the growing town, plus the idea to include a meeting hall above seemed like a good addition. The heart of Boston had a hole that Peter wanted to fill, accommodating both public and authoritative services. This idea, though initially turned down by Boston officials for economic reasons, was voted into enactment by the town.

After construction was finished, the hall was more used for its meeting space rather than its market, which inevitably split up the junction into what you may know today (Faneuil Hall the building and North/Quincy/South Market the markets). The hall became home to the town government and public meetings, and deemed the name Faneuil Hall by the town’s residents in honor of the man himself. Nowadays in and around the area, you can find outdoor entertainment as well as various outlet stores and eateries that are operated and toured by upwards of 18,000,000 visitors per year, all in the shadows of Boston’s largest skyscrapers.

It’s truly bewildering that we haven’t thought or known about this while perusing Victoria Secret, huh?

Faneuil’s gratuity towards the hall’s creation is one to notice and undoubtable gained attraction for the area. Though when we think about how construction was funded, we find the ghost that looms in our American history; the buying and selling of African American men and women for profit. The foundation at which this landmark stands was partially endowed by this fact, causing people to question its very existence and value. One group in particular, the New Democracy Coalition led by Kevin Peterson has been seeking to squash the name entirely since June of 2018.

In an article by NBC Boston, Peterson says “Massachusetts was the first state to abolish slavery, yet the residual effects of systemic racism remain.” The idea that one of our signified parts of territory was brought up through dirty money, rests Peterson’s wording into light. The NDC has hopes of renaming the hall after Crispus Attucks, the first person killed in the Boston Massacre.

Some reactions towards the NDC’s callouts include Mayor Marty Walsh, who is not in favor of the name change. The ties between Peter Faneuil’s history and the commendable successes enacted inside Faneuil Hall, seem to collide for Walsh. Though he is aware of the dirty money foundation via the NDC, he seeks restitution through the forms of justice the meeting place has served.

In a previous statement made by CBS Boston, “Over the years, Faneuil Hall has become a place where good things have happened: historic speeches such as Frederick Douglass’ call for the end to slavery, the signing of forward-thinking legislation like the Affordable Care Act, and where hundreds of people take their oath of citizenship every year…” By presenting these examples, Walsh doesn’t wish to erase the building’s history, yet acknowledge it, learn from it, good, bad, and ugly. Trying to shift focus more on present day usage and benefits it has made for the public.

In an ongoing debate between Peterson and Walsh, time can only tell what the outcome could be. Acknowledging a dark past of a tourist attraction such as Faneuil Hall could definitely hurt visitation due to public concern, though in the end displays truth in the history. In my opinion, there needs to be a common ground of understanding of the system that the Hall grew upon. Indeed we the people view Faneuil’s hall as the “Cradle of Liberty”, though we have every right to question if that’s something we should feel liberated about.