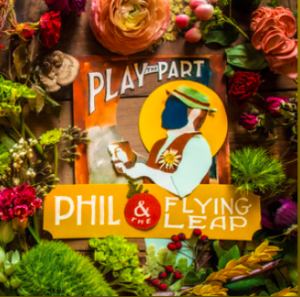 I dare you to listen to Play the Part without a smile on your face. Across the various twists and turns of this adventurous album, Phil Berman and his massive team of Boston-area orchestral talent achieve elements of Edith Piaf, Nora Jones, flamboyant musical theater, and sheer exuberant wit. Phil and the Flying Leap is led by Phil Berman, as writer, composer, and frontman, with Sue Buzzard and Forrest Pettengill on strings. For this album, however, the trio is joined by a “doozy” (Berman’s word) of 24 Boston musicians for which Berman worked closely with writer Brandon Wilkins to manage an incredible number of orchestral parts.

The opening and title track, “Play the Part,” is an enormous tragicomic Disney-villain-worthy vaudevillian charge, about the ambitions and emptiness of show business and public adoration. Berman brings his impressive orchestra to the fore immediately, with a force both tightly controlled and shatteringly explosive.

“Play the Part” kicks off the album with sweeping sound that bounds and sparks below relentlessly clever lyrics, as the nameless performer fights tooth and nail through the performance industry while “grieving who you’ll never be.” Funny, catchy, and disquieting, it sets the tone for the remainder of the album: delicately bittersweet and unrelentingly optimistic, with an addictive momentum.

The second track, “Give the Boy a Dollar” is a chipper pass-the-hat tune that should feel small and frail on the heels of the album’s big opener—but it holds its own. Another gem follows with “Joie de Vivre”: a generous and gorgeous love song with an old-time sound and goosebump-inducing sweetness. Each song has a remarkable, plot-twisting strength that takes the listener by surprise, as this soft love song bounces into the humorous fiddle-heavy “Company Time,” a raucous and scathing song about making a dollar and paying the Somerville rent.

With Buzzard’s purring violin as the backbone, the theme continues with “Professional Attire,” a tango-esque love song-reminiscent of Jonathan Larson-about slipping out of a work suit at the end of the day and thrills going cold. This smooth mourning oozes into the slow, dark melody of “Bad Juju”—which leaps into the playful bouncing bass of an interlude march—which then catapults into a tongue-in-cheek murder ballad sung from the perspective of a black widow gentleman getting “square” with an assortment of unlucky lovers. It should be clear by now that you can’t see around the next corner of this album, but in the very best way. It’s like a wonderful and elaborate hedge maze in which you can’t take a wrong turn.

The album slides toward its conclusion with “You in the Bag,” a musical-theater-flavored anthem about the strange and joyful twist that marriage puts on an already long and steady relationship, swelling to a Sinatra-smooth chorus. Then Berman jumps into a personal favorite of mine: a quick and dirty ditty about touring through Boston neighborhoods, from JP all the way to Billerica via relationships that turn fantastically sour. “Keep your Billerica honey, I’ve got peaches in JP” isn’t the most delicate or subtle line of the album, but it unfailingly gets a laugh. From there we’re back to Berman’s swinging domestic drama of “Good Times,” a silky reprise of “Joie De Vivre,” landing with a swaying melody on “Oh, How The Pendulum Swings” that reflects on the languorous and inevitable passing of time.

Play the Part as an album is about illusions and dispersing them—grand stories and the realities behind the glamor, delivered with undeniable skill and charisma. What should feel like jarring disconnects only make each gem of a tune that much lovelier, darker, and funnier. This record has a genuine magnetism and scale that is impossible to anticipate but also impossible to deny.

I’ve heard pieces of this album out and about around Camberville, from Lizard Lounge to Porchfest, and while the live sound is always clean and impressive, the orchestral frame boosts these tracks to another level.

Berman’s voice remains the real star of the show: I’ve heard him cover Rufus Wainwright and pay homage to Edith Piaf with equal acumen. (I am still waiting for him to record his solo version of “The Art Teacher,” Lizard Lounge circa 2019.) His lyrics’ speed, precision, and humor are something to behold.

Play the Part won’t be everyone’s cup of tea—Americana vaudeville does feel rather niche as a hashtag—but it is undoubtedly an astounding record with an enormous amount of talent on display.

Liked it? Take a second to support Alison Lanier on Patreon!