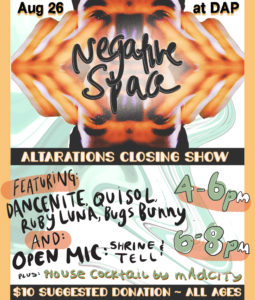 What do you worship? Do you worship One, No One, Many Ones, All-in-One? There’s room (spiritual, not physical–the space is crammed with shrines) for whoever/whatever/whyever at Negative Space: Altarations’ Closing Show/Early Party at the Dorchester Art Project on August 26th. Negative Space will be an altogether positive reflection on opposing forces; we will collect together to worship the differences. You can read more about the exhibit and the sh0w here, here, here, and RSVP to the show here.

And I had the divine opportunity to speak with some of the closing performers. This is what I learned:

Ruby Luna worships “existence, evolution of the self, and the ability to create.” Their shrine was borne of their body, and depicts how the body sustains, cradles, and reflects all its divine components. For them, it is a “holy radical act to workship body when it or gender identity doesn’t fit into categories society is most familiar with.” Their shrine preserves this ephemeral moment of a life lived outside of boundaries, a small piece of existence during the perpetual evolution of identity. To Ruby Luna, negative space is “the environment and/or people that suround my body/existence at any given time.” Their shrine is minimalist in design, so that it may be more conducive to the viewer’s appreciation of the “shining, luminescent qualities of existence.”

Quisol is still a bit of a mystery to me, but if I had to guess I’d say they worship smooth jams and real love. Their music is of a singular genre: #LatinxFuture, drawn from their “diverse roots  to put a futuristic spin on Afro Caribbean beats, Salsa, Bossa Nova, and Soul.” The Artist/Organizer is also responsible for Queen’s Collective, “a DIY art movement cultivating the Charlotte house show scene.” Yes, this is someone that I have faith would be down to bring us together.

Bugs Bunny worships “the pain of truth.” Their shine was inspired by the current state of the world and its inhabitants, “the millions of people caught in the global refugee crisis, fighting to survive, finding themselves hopeless and powerless as the rich stuff their disgusting faces and late capitalism matures and collapses into itself.” To them, negative space is a place of identity: “in defined spaces i cannot recognize myself, i struggle to express myself and sometimes lose my ability to empathize.”

DanceNite worships deeply artistic practices, and without much fervent belief in institutionalized religion, finds a heavy appreciation for trance-inducing rituals, voodoo–he digs it all, in a way. Their shrine is not one designed to be displayed so much as experienced–his performance will be a shrine to music, to the radically different occupying the same (sonic) space. He’ll combine minimalist sounds from the 60s and 70s with hip hop focals, he’ll mesh techno and Bach (…Bachno?) It’s a multisensory performance so prep your eyes as well as your ears.

What are some of these shrine-crafters’ favorite things about the show? I’ll let them convince you to come.

“Seeing others’ reactions to the divine!!! Seeing connections and polarizations &&& celebrating it all!!!”

“the occasion for so many ideas of spiritual/holy tribute to be in one place. sacred profane pearls garbage are all on display”

The Closing/Early Party will be held on August 26th at the Dorchester Art Project. Cocktails will be brewed by m.A.d. city. The reception will be from 1-4, performances will be during 4-6, and from 6-8 there will be an open mic. Tell us what you worship.