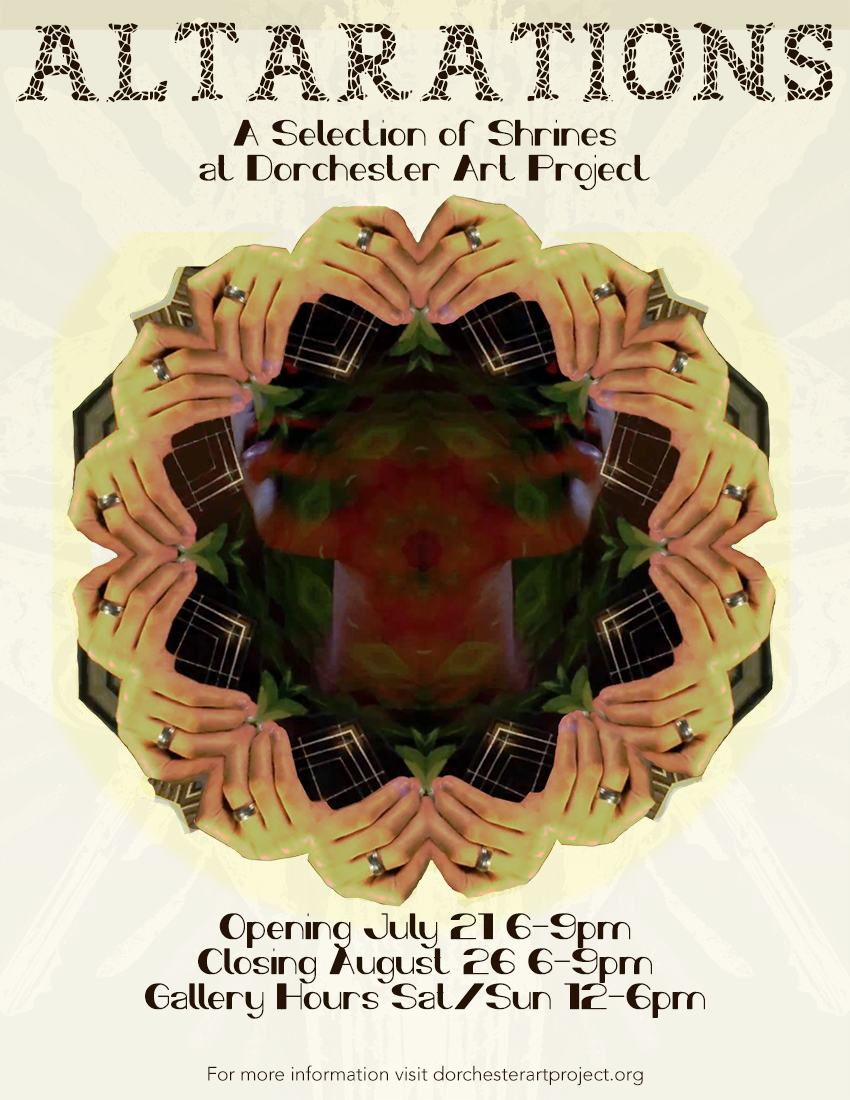 What do we find holy?

We all inherit belief systems from the world around us – from our families, our cultures, and our religions, then we reinterpret them based on our unique lives and experiences. Altarations is a culmination of many artists’ unique approaches to “shrining” – ways of honoring what we hold sacred, often stemming from inherited traditions and then filtered through our own time and place. Some artists created shrines to a singular object, person, or deity, while others created places of remembrance for the past or hope for the future. The artists’ responses range from personal to political to pop culture (and a remarkable number of pussies), expressed through painting, sculpture, photography, performance art, objects from peoples’ personal collections, and more.

From self trained artists to those working as teachers, to collectors, and those who make shrines in their own homes, Altarations features shrines from a total of 60 creators. Below are just a few of the many artists below who contributed to the show, whose varying responses highlight the multitudes of all we hold sacred. 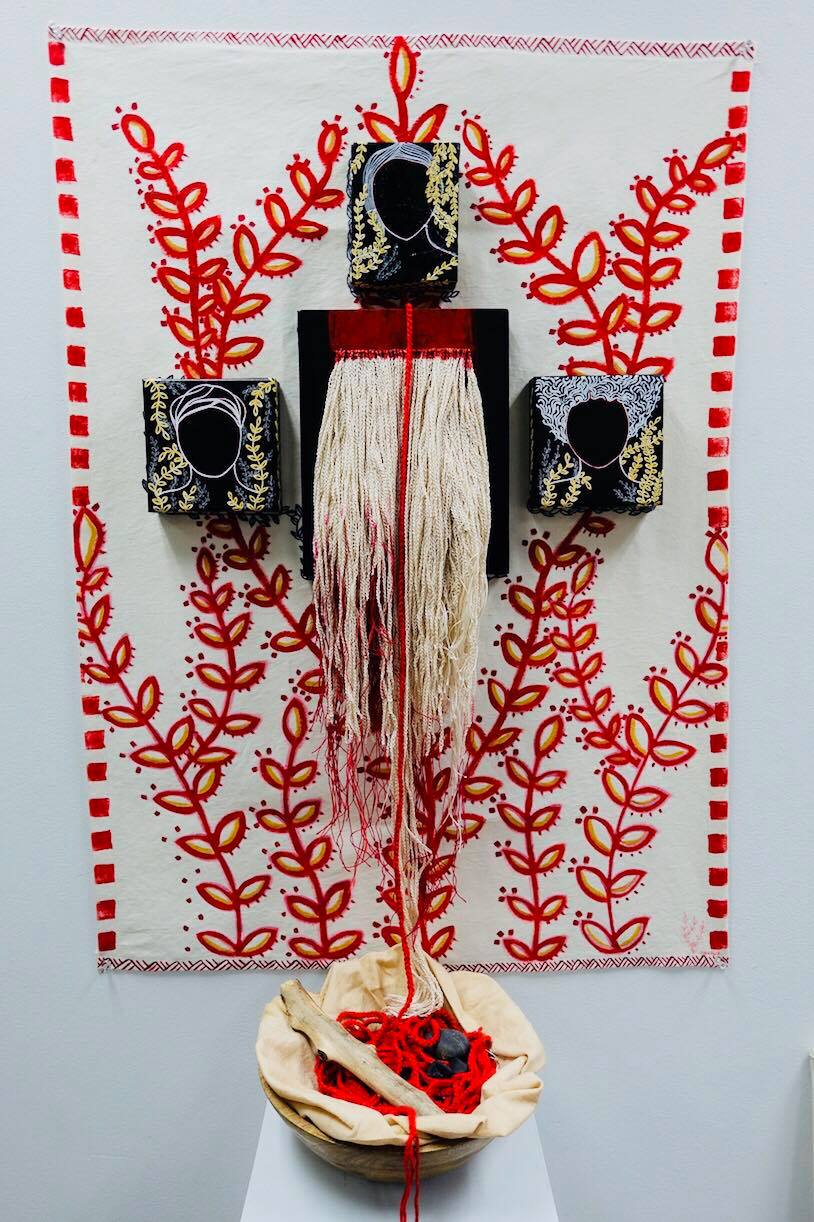 Ankana, Altar to the Nameless Migrants

Ankana is a self taught visual artist born in Assam, India whose family immigrated to the USA in the 80’s. In the Axomiya culture, the departed are honored by placing a photograph of them in a central place in the home draped in flower garlands, surrounded by plants and a gamoucha, a rectangular piece of white fabric with red embroidery. In the evening, incense is burned and a candle is lit in remembrance.

Ankana’s piece Altar to the Nameless Migrants follows in this tradition to honor those who have died in transit in search of a better life. In the first eight months of 2017, 3,741 migrant fatalities were reported worldwide, the real number of casualties unknown as many of the deaths are never reported. A red crochet chain on Altar to the Nameless Migrants has 3,741 stitches to represent the lives lost. Ankana says, “We may never know their names but we can honor them in their passing,” and encourages visitors to write a prayer or words of hope for the future to leave at the altar. 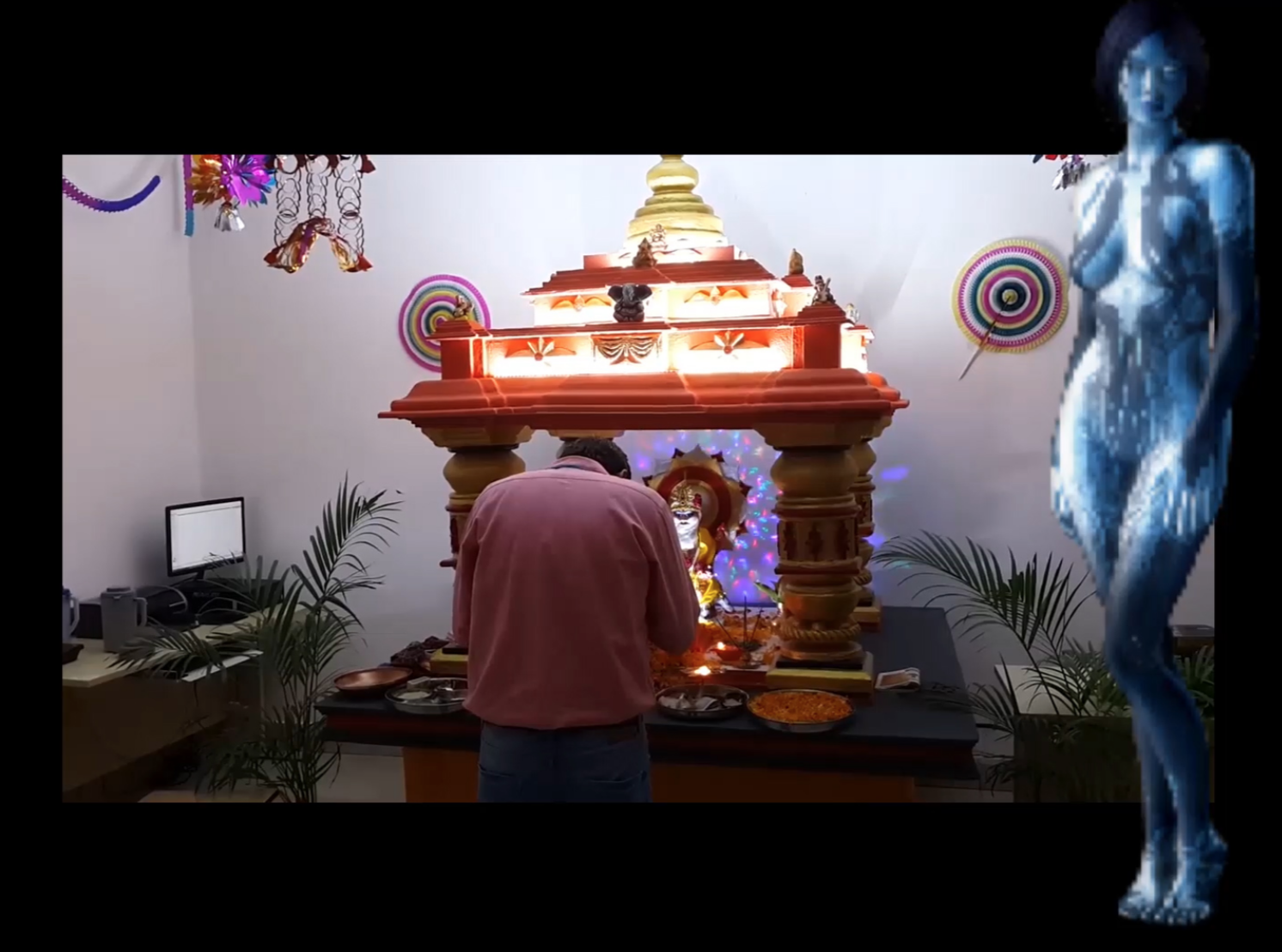 Anisha Baid is a 21 year old artist from Bangalore, India. In her father’s small factory, growing up Baid observed the celebration of Vishwakarma Puja. Vishwakarma, the god of technology and industry, has been revered by factory workers, drivers, and mechanics.

In her video work, Youtube Mythology, Baid attempts to make sense of certain specific threads in cultural production; she sources videos from Youtube of Vishwakarma Puja, and using text to speech narration she takes on the persona of Cortana, the Microsoft personal digital assistant. Baid draws parallels between the ritualistic and religious figures Cortana and Vishwakarma, nudging one to think about humans’ relationships with machines. Baid closes, “Vishwakarma accommodates a future so full of things as ours, he provides hope that we may live and work in harmony with our guns and cars and computers and AI assistants and virtual girlfriends and so on.” 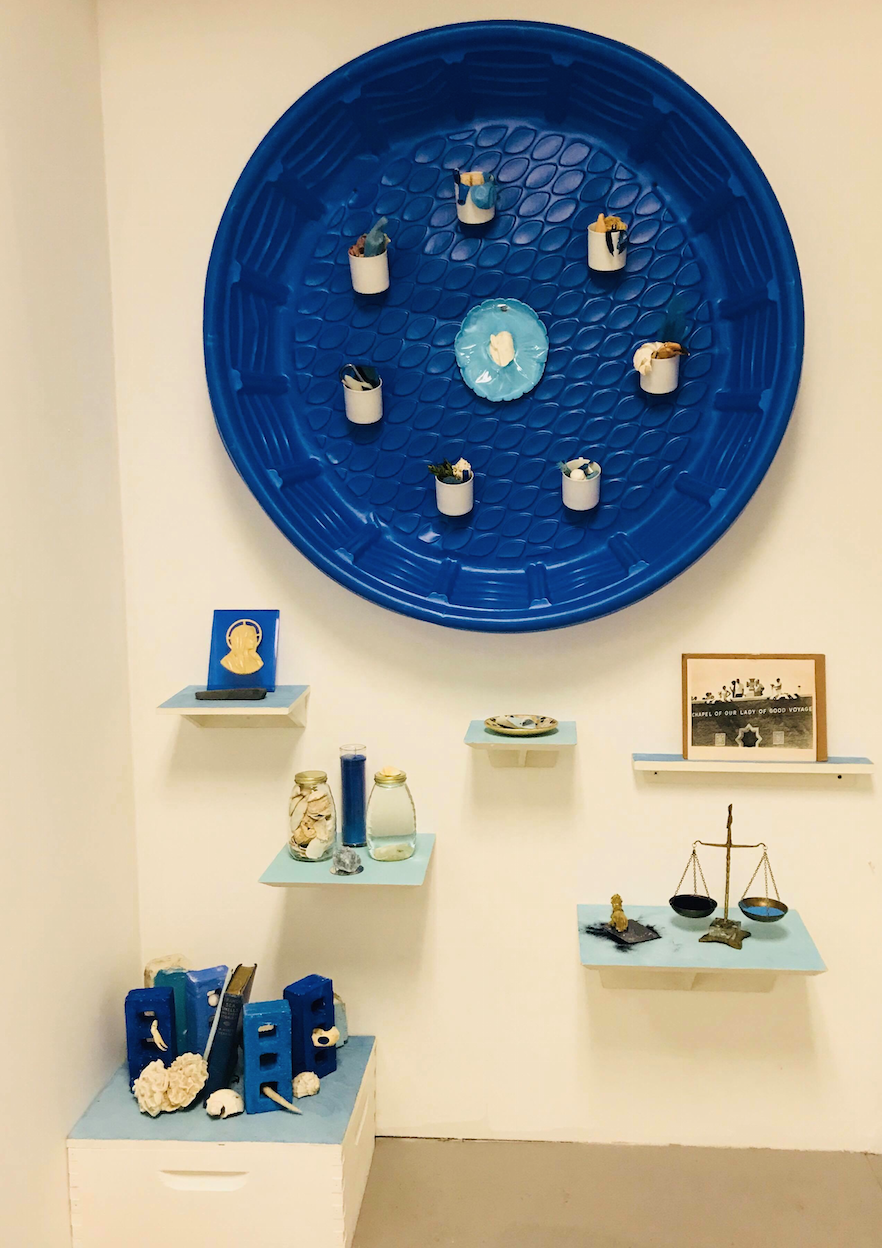 Maria Molteni is a multimedia artist living in Boston whose work incorporates movement, research, ritual and social engagement, exploring themes from religion and spiritualism to shipwreck and coastal gastronomy. Her work Ruina Avem Maris (Latin for “Fall of a Sea Bird”), is an investigation, celebration, and funeral of the Boston chapel Our Lady of Good Voyage, which was erected in the 1950’s fifty yards from the harbor shore as an oasis for seasurfing migrants. She says, “One could imagine that the seashells sprinkled beneath the feet of a white Madonna could have washed up on the steps or been released with the skin of the peeling statue. For decades, she has stood with outstretched arms to protect the land and seas.”

When the chapel was torn down and rebuilt in a new location last winter, a priest offered Molteni bricks from the old building and involved her in the plans to rebuild. Ruina Avem Maris is made from found objects from the harbor and objects extracted from the chapel after it was gutted. The shrine addresses ongoing interests in the Sirens as matriarchal alarm systems; she writes, “The white Madonna was removed almost in tandem with the wave of natural disasters that ravaged the Caribbean last fall.” 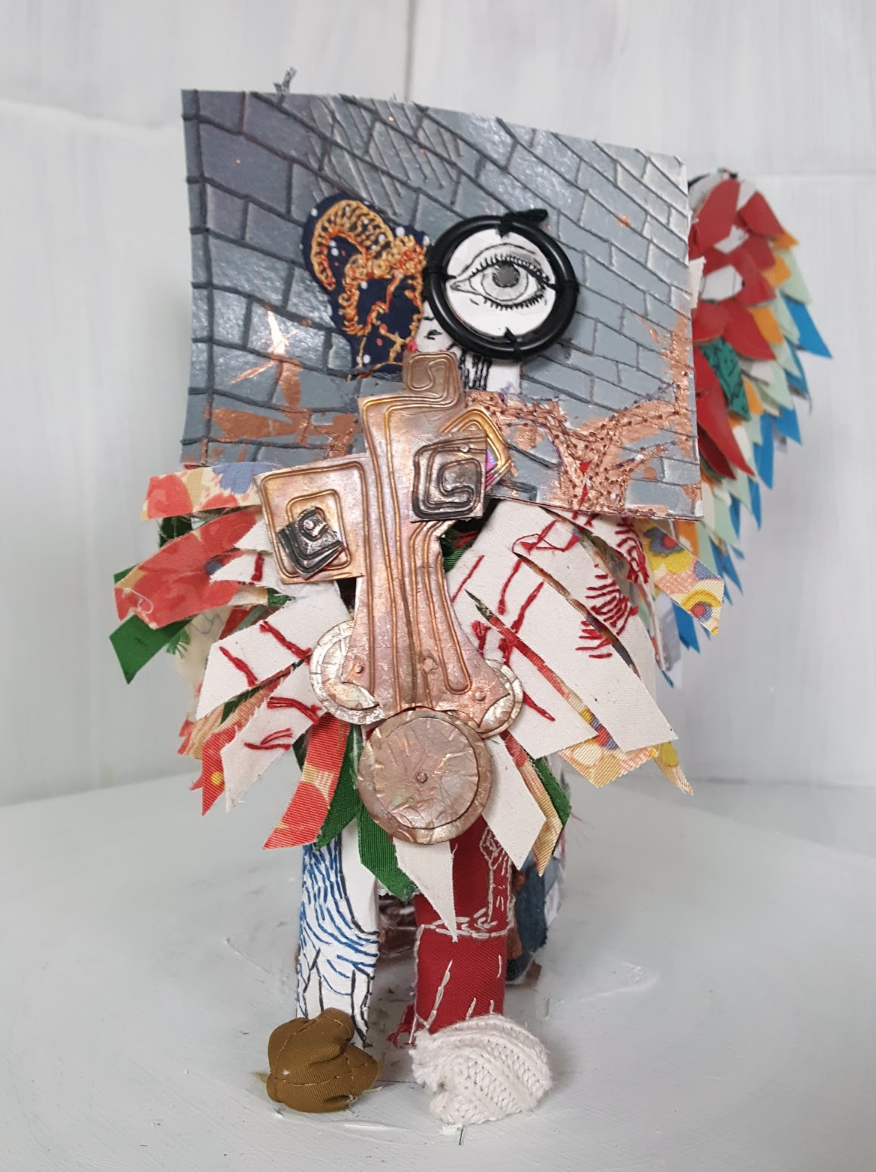 Alexis Agbay, artist, costume maker, milliner, and Mass Art grad, created her shrine Homage to Failure in honor of past failed artworks. Agbay used her old artworks to create a new piece in the shape of a sphinx, a creature with the head of a woman, body of a lion, and wings of an eagle. The mythological creature was said to have asked everybody the same riddle but only one man could answer correctly while many others failed; “The sphinx represents the overpowering importance of the discarded journey.”

By creating a shrine to failure, Agbay reveres what many cower away from. She says, “Failure rules most people’s lives and decisions. People are often motivated by fear of failure, avoidance of past failures, or learning experiences cause by failures.” However life is a journey often with more failures than successes, especially for an artist and a maker. Homage to Failure is Agbay’s way of celebrating and embracing mistake-making as an adventure rather than something daunting or debilitating. 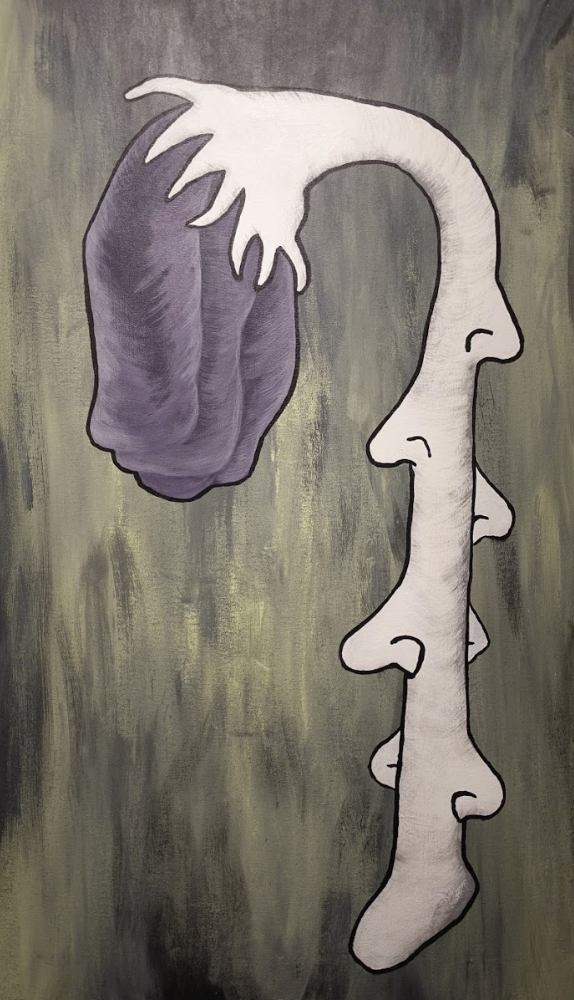 Lilly Dickinson is a 26 year old filmmaker, musician, writer, and visual storyteller whose work “has to do with exposing dark inconvenient truths, creating comfort, and using the things I find ugly about myself and the world and turning it to create something raw and beautiful.” And one of these beautiful things she explores? Noses. Dickinson has spent the past four years dissecting and reexamining the theme of the nose – what started as an exercise to strengthen her drawing skills in art school became a recurring, meaningful theme in her work. For Dickinson, “The nose is never romanticized in poetry and art, the nose is often associated with smells and stinks and sniffles. Yet the nose is the center of the face, smell is one of our strongest tools in recalling memories, and the nose has so many beautiful and complex shapes within it.”

Nose Bible  is a culmination of four years of noses – regular noses, crazy noses, abstract noses, things that weren’t noses that she turned into noses. Dickinson’s shrine brings together these homages to our schnozes in a maddening collage of everything olfactory. She pairs these studies with her painting Sneezing Thorns of a giant rose with all its thorns replaced by noses. As a trans woman who struggles with the idea she has to change her appearances, Dickinson has painted these noses as a fight against a nose job. She says that her own body is covered in thorns like her nose, but “Thorns can hurt, draw blood, and make it hard to hold a flower. Yet its still a part of a flower. And flowers as a whole are seen as beautiful.”