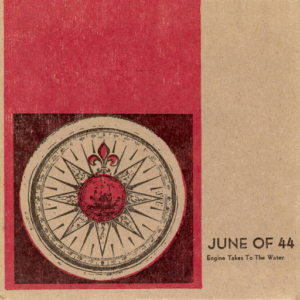 Slint was the catalyst for all of this. I had no idea that opening this door would lead me to the brilliance of all the artists who lived nearby to Spiderland’s young geniuses. I believe that Louiseville was the birthplace of post-rock. For months and months, I’ve been obsessed with that small town.

When I was listening to Slint, Rodan, and June of 44, I was looking for a specific, let’s say: phenomenon. It’s the poetry-like monologue that wasn’t created so that the music could accommodate it, but rather the “monologues” were written to fit the music that was already created. This also reminds me of Current 93, who used similar poetic utterances in a completely different way. I’m getting off track here, but the entire process of writing poetry that interweaves perfectly with the fabrics of harsh guitar tones, sound amplification, texture density, and spaces open for silence to embrace is wonderful. Engine Takes to the Water contains a chord progression that induces a mysterious aqueous atmosphere of sorts, and it is a beautiful result of using instruments in this manner.

As a music lover and a literature graduate, I can attest that it is an audibly enlightening experience. Cornerstone members of Rodan, the For Carnation, Hoover, and Lungfish were pouring their creative juices like no other to shape this indie-rock beast of an album. In terms of intensity and experimentation, I believe this is on par with Spiderland, albeit to a lesser extent. It’s as if you’re a sailor watching a storm over the open sea, obambulating over the perfect balance of tidal calmness and wildness.Instruments can be vociferous (as in Have a Safe Trip, Dear) but also subtle enough to penetrate layers of your skin (I Get My Kicks for You). What I like about the album’s poetic vocalization is that it ultimately speaks of the human condition. Something that oscillates between the hardships of daily life and longing, as well as all the in-betweens of love, loneliness, and the magic of baking bread and making coffee. Most importantly, it reminds you to breathe…breathe. It is a rocking motion between all states of humanness, not just a constant flow of an emotional singularity. This is what I find most appealing about albums like this: it has a profound effect on you. I’m not sure what else is for you if this album isn’t for you but Take It with a Grain of Salt.