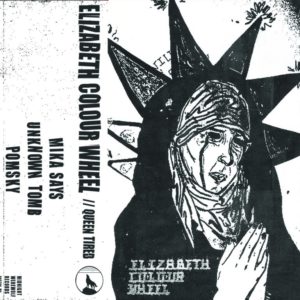 Not often enough do I hear a band that commits to volume and depth in the way Elizabeth Colour Wheel does with their latest release, an EP titled Queen Tired, released on Midnight Werewolf Records. In the span of 3 tracks, Queen Tired goes further than most EPs of any genre do, successively expanding on ideas with each song, resulting in a fascinating “staging”. At each level Elizabeth Colour Wheel explore more territory than the last, and as a result they show off their versatility, enlightening them to a level that many other prefix-gaze bands only dream of reaching.

The first track, “Mika Says” walks in, just barely able to contain its energy and size, allowing the first couple of verses to explode in waves of distortion in order to hint at something bigger. ECW are smart and open the gates in a moment where it seems like everything could fall apart, knowing not to give “it” all away at the start, giving a sense of relief once they finally tear into my mind with some punk riffing.
The next stage, “Unknown Tomb”, starts similar to “Mika”, but instead of reaching a climax it sloths away into eventual nothingness, and each unessential aspect of the main riff sloughs off into a reverb- drenched fog. The song collapses in slow-motion, drowning and writhing as it descends to the ground. Wailing vocals and drums hitting only when necessary shows a well executed excerise in minimalism. It’s refreshing to hear the less-is-more approach with full commitment.

“Pomsky” is the last stage in this dungeon: It’s twice as long as “Unknown Tomb” and further elaborates on the same theme. The title plays out like a pomeranian-husky mix: a contrast of fast, fun driving guitars and textures, playing out into a drawn out deconstruction that can only be appreciated fully with a sound system that can produce adequate bass response.

“Queen Tired” is texturally ambitious as everything in the entire shoe-gaze subgenre. Thinking back to when I first saw them in my little basement 3 years ago, I was overwhelmed at how this band managed to be so loud and simultaneously compelling, taking up every frequency of sonic real estate at one time without losing critical elements of composition to distortion. They’ve successfully captured the essence that I could only suspect they were capable of, and it’s finally here. Make sure to get a copy of Queen Tired now.

Liked it? Take a second to support Jon Hanson on Patreon!