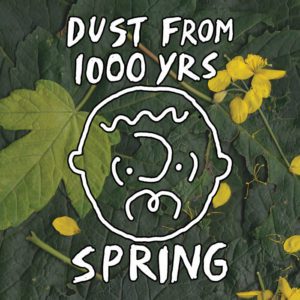 If the Boston rock/folk ghost Dust from 1000 Years is anything, it’s consistent. With their last three single-word titled albums: Landscape (2012), Moon (2014), and Spring, released September 2016, they released three albums true to their name. Landscape was an intricate, strange album with an artistic vibe. Moon, full of harsh yet distancing space jams. 2016’s Spring stayed to its name in a way that I liked best. Its an album as soft and as organic as springtime.

Spring is slightly different from the two similarly-titled releases put out via the Boston label, So Hard Young Boy, ran by Charlie Bone of Dust. Both preceding albums have a more aggressive and layered energy to them. Spring, on the other hand, is a simple collection of sparse tracks, put together with quiet instruments. Guitars are softly plucked, sometimes almost heedlessly strummed. Bone’s typically melancholy vocals have a air of hesitant spontaneity that show he’s in no hurry to get through the song. But all of these understated vibes work perfectly for the album.

On “Someday,” a track of hopefulness is sandwiched between tambourine-y nature anthems “Spring I” and “Spring II.” Back to back to back, these songs capture the essence of the season of relief, in ponderings on the future. Later on “Unlearn,” Spring continues with themes of newness with enchanting guitars, and creeping, Velvet Underground-esque tambourines. There’s also a banjo. Together, all of the elements on “Unlearn,” make it suit a thoughtful springtime nature walk.

For anyone who’s suffered through a Boston winter, Spring is a highly relatable album. After the snow’s gone and you’ve spent months trapped inside over-thinking, the relief of Spring is a physical, tangible feeling. Here, Dust from 1000 Years captures the quiet subtleties of those feelings in their own way.