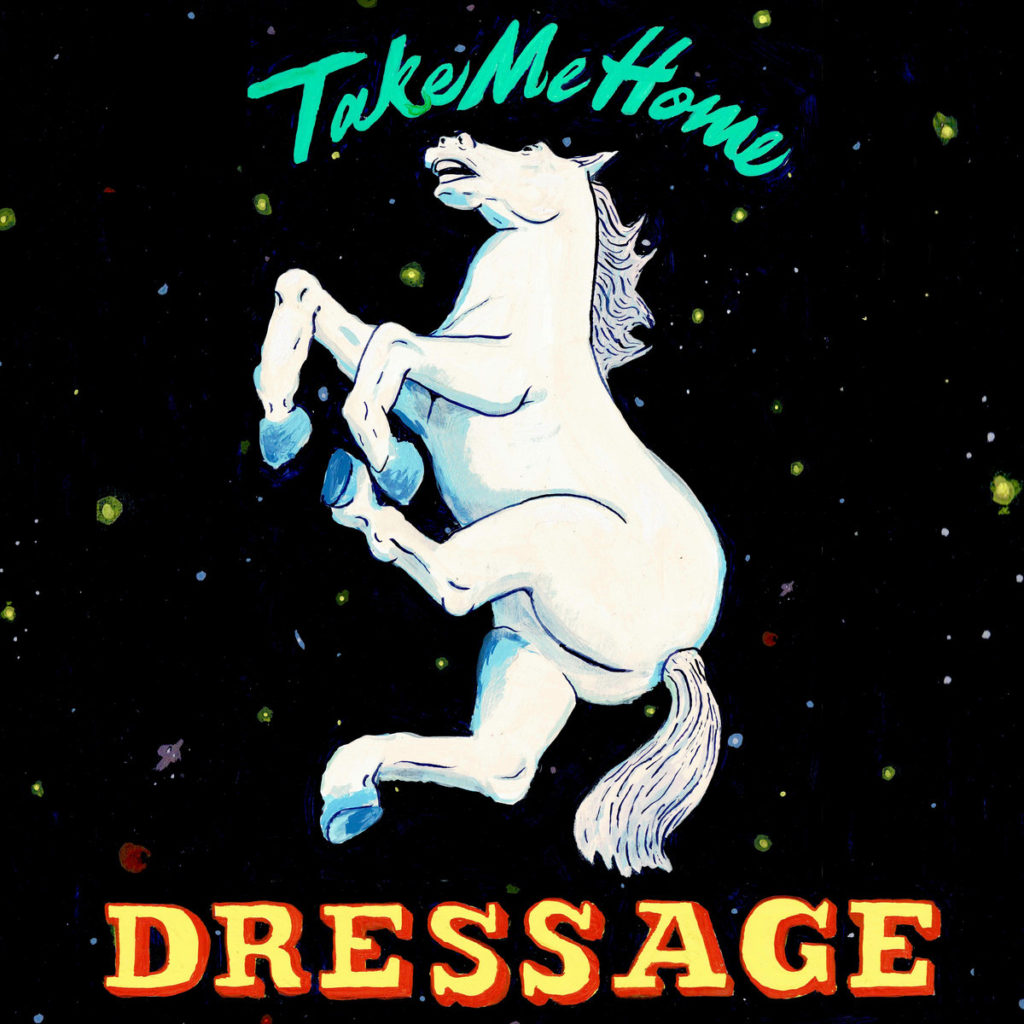 Horse-smut-loving Dressage’s new release titled, “Take Me Home” is a voyage through the avant-garde fit for the most gravitationally averse space cowboys. The troupe’s 2017 debut saw the trio, Sam Fribush, Will Greene, and Jon Starks (hailing from NYC, Boston, and New Orleans) melding jazz, prog, and honky tonk to create a disorienting yet lively release. This latest album, with Carrie Furniss of Birthing Hips fame taking the reins as the band’s vocalist, presents a well balanced mix between a small aesthetic against a larger catalogue of American Kitsch music. The twangy almost country sensibilities of their namesake and numerous genres such as funk, psychedelic, and jazz creates an amalgam of spacey, yet condensed experimental music.

The album begins with Carrie’s slow croons, accompanied by flurries of frenetic synth hits and a percussive jangling of wind chimes, easing into what will become a meandering-albeit-pointed space trip (or dare I say trot?). Dressage walks the fine line between hard hitting, deliberate grooves like the noisy shuffle on Hold Yr Horses, and loose experimental segments as heard in tracks such as Isle 3.

The fifth track contorts oddly with panning vocals declaring, “looking good, feeling good”, and random steel drum melodies echoing into a colorful void. Sam Fribush does a great job filling said void with an array of voices such as the harpsichord found on Town to Town and Will Greene’s guitar licks fluidly shift from twangy country finger-style to jagged free jazz in moment’s notice. Dressage’s songwriting ebbs on chaotic, but their songs maintain a sense of synchronicity (surprisingly enough) that keeps their wild improvisations contextually sound.

“Take Me Home” peaks late with the track, Dusty Trail, which stands out as the most western-sounding ditty on the western, not so western album. Warm sounding drums sit back in the mix, providing a galloping backbeat to spaghetti western guitar licks, hammond organ, and operatic yodels. Comparative to the rest of the album, this genre-fitting track feels perhaps the most like a fever dream. Dustry Trail’s adherence to genre specific qualities, especially considering the track following it, Space Age’s dizzying synthetic voices drum machines and looping synths jolts the listener into, then out of a trip. “Take Me Home” ends in a dark comedown, leaving the rabbit hole with a final burst of light and a billion questions. One of which being, “where’s my damn horse?”. The stark contrast between the vintage western vibes and minimal synth of the last track perhaps exposes the thesis statement of what seems to be the band’s central concept: how can a few unrelated genres mingle without compromising? The result is pretty wacky and surely worth a listen.