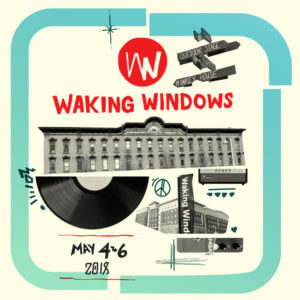 Greetings from ‘The Last Outpost’ here in Burlington, Vermont! Its cold and dark in February, but February can piss right off when you’ve got a good thing going on with your music scene. Even those huddled by vitamin D lamps and cursing the missing sun must have felt a jolt of excitement at the announcement of the biggest party of the summer to come.

The folks over at Waking Windows released the initial lineup of their eighth annual music and arts festival, and it is (pardon my French) a fucking doozy. Deer Tick, Palm, The Districts, Ohmme… there’s incredible indie-rock all across the bill, not to mention Chicago rapper and poet Noname, L.A. folk songstress Bedouine and Portland Maine’s Jaw Gems.

Last year featured over 90 bands, spread throughout and around downtown Winooski. Every club, bar, restaurant, church, coffee house, and brewery became a venue for three days in May – hell, they even put a stage in the rotary. Real Estate and Dan Deacon played across the street from my old apartment. It was magic.

This year has all the potential to top it. On top of all those incredible acts at the top of the bill, Waking Windows is once again chock-full of Burlington and greater Vermont’s currently killer music scene. Head over to www.wakingwindows.com for the full lineup, get your head right, then just start Google-ing through the bands, there’s more gold there than Tywin Lannister’s shitter. Here are a few highlights of the Vermont talent that will be on display.