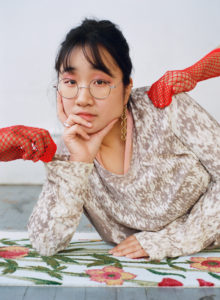 If there’s one thing we all love to hear, it’s a good quitting story. Cue the story of 24-year-old Brooklyn musician Yaeji.  She left her graphic design job literally last week, following a year in the spotlight with positive reviews from NPR, Pitchfork, The Fader among many others.

One of those others singing her praises is Lorem Ipsum, where I first learned of Yaeji. The NYC-based newsletter highlighted Yaeji’s new hit “drink i’m sippin on,” which they called “breathy and swirling, intriguing and comforting at the same time.”

Couldn’t have said it better myself.

The Yaeji pick is just one example of Lorem Ipsum’s music curation and commentary, offering three artists a week, of interest to you and I. At the top of each sarcastic and colorful newsletter, music gets the top spot before biting food or culture news. Lorem’s brought my attention to other (affectionately) weird electronic artists like Superorganism and Lindstrom this month, as well as reminded me of new tracks from old faves like SABA and Chance the Rapper. Like all good newsletters, Lorem is a friendly face in your morning inbox. Unlike most other music reviewing outlets, Lorem’s music journalism is genuine and unbiased.

Now for some unbiased words from me about Yaeji: combining Korean and English lyrics w/ her ambient beats, to serving curry on the dancefloor, Yaeji invites us into her own community. Her music is good dance music, continuously vibey. Listening to her November release EP2, the listener is very much taken into Yaeji’s world. Yaeji’s culturally-relevant music is not unlike the current focus of the rest of NYC. BRUJAS is a female skateboarding collective that serves family recipes at their parties. Discwoman, a dance collective and booking group (that featured a Yaeji mix this earlier year) brings attention to fem/queer/trans DJ internationally. Intersessions, since 2016, has brought DJ-software workshops to young women from NYC to LA. If there was ever a time for Yaeji to put out an album with a mirror selfie on the cover, it’s now.

On Yaeji’s cover of Drake’s “Passionfruit” from EP2 there’s humorous introspection not unlike much of her soundcloud laptop-made beats. You could listen to SZA’s Ctrl or watch music media darling Amine’s Urban Outfitters interview and get the picture. Yaeji knows exactly what time and place she exists in. Her music, her style, and her context are soaked with relevance. It’s too good to pass up.