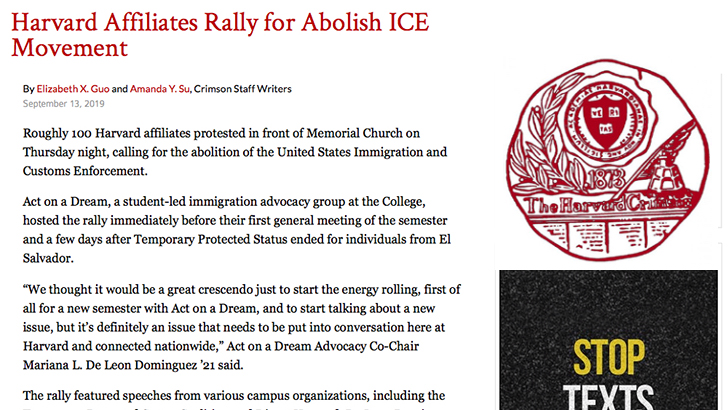 As someone who has been both a journalist and a left-wing political activist for a long time, I suppose it’s inevitable that I would feel the need to weigh in on a debate currently raging between Harvard immigrant advocates and the independent Harvard student newspaper, the Crimson.

At issue is that paper’s coverage of a Harvard rally calling for the abolition of US Immigration and Customs Enforcement held by a coalition of campus activist groups led by Act on a Dream—“the premier immigrants’ rights advocacy group” at the elite university, according to its website.

The action took place on Thursday, Sept 12, and drew about 100 attendees. The Crimson wrote a very straightforward news piece about it the next day. Just like I did dozens of times covering all kinds of left-wing protests over the years. The two student reporters quoted the protesters at length, as I would have. They then asked ICE for a quote, as I myself did for literally every story I ever wrote—and there were many—on protests against the federal agency. ICE didn’t reply. Like its press liaisons refused to reply any of the times I asked them for a quote. Like they refuse to reply to many news outlets that ask them for quotes. Which is disgusting practice for a government agency in a democracy, full stop.

The immigrant activists and their allies immediately got angry at the Crimson. Not because of any error of fact. Or because they thought they had been slighted in some way. But because the reporters contacted ICE for comment.

They demanded that the Crimson agree to stop calling ICE for comment going forward.

The activists met with Crimson editors about the matter, and the editors refused to back down. Unsatisfied, the activists organized a petition on change.org entitled “Harvard Crimson: Stop Calling ICE for Comment.”

In the petition text, the activists said, “We are extremely disappointed in the cultural insensitivity displayed by The Crimson’s policy to reach out to ICE, a government agency with a long history of surveilling and retaliating against those who speak out against them.” Following a link to examples of such retaliation, the activists continued, “In this political climate, a request for comment is virtually the same as tipping them off, regardless of how they are contacted.”

The activists concluded: “We demand that The Crimson: 1. Apologize for the harm they inflicted on the undocumented community. 2. Critically engage with and change their policies that require calling ICE for comment. 3. Declare their commitment to protecting undocumented students on campus.”

Over 900 people, and a number of Harvard student groups, signed the petition. The activists called for Harvard students “to boycott the paper by refusing to return requests for comment,” according to the Washington Post—one of several major news organizations that have covered the dustup.

Two top Crimson editors responded with “A Note To Readers” in which they stated “Let us be clear: In The Crimson’s communication with ICE’s media office, the reporters did not provide the names or immigration statuses of any individual at the protest. We did not give ICE forewarning of the protest, nor did we seek to interfere with the protest as it was occurring. Indeed, it is The Crimson’s practice to wait until a protest concludes before asking for comment from the target of the protest—a rule which was followed here. The Crimson’s outreach to ICE only consisted of public information and a broad summary of protestors’ criticisms. As noted in the story, ICE did not respond to a request for comment.”

The editors concluded, “We understand that some readers may disagree with The Crimson’s policies. But our mission is facts, truth, narrative, and understanding. In our view, consistent application of a commonly accepted set of journalistic standards is the best way to fairly report on the campus in a sensitive and thorough manner.”

That statement was published on Oct 22. Since then, the activists have not relented. They have essentially made their campaign against the Crimson a major focus of their activism for this school year.

On Sunday, the Harvard student government, the Undergraduate Council, narrowly passed a somewhat vaguely worded statement calling on the Crimson to change its policy: “We condemn actions or policies that endanger undocumented and immigrant students on campus, and we encourage the Harvard Crimson to revisit their policies and make adequate changes. It is imperative for the Harvard Crimson to commit to journalistic practices that do not put students at risk. With this stated, we understand that upholding journalistic standards within the Crimson is vital; however, we do not believe that upholding such standards and ensuring the wellbeing of students are mutually exclusive.”

The statement concluded: “The Undergraduate Council commits to exploring methods for continued safety for undocumented students and other student activists in interacting with the Crimson; such methods include but are not limited to reviewing and publicizing Harvard Public Affairs and Communications Crimson trainings, and working to make reporting policies more accessible and public.”

In the student newspaper’s article on the council statement, Crimson President Kristine E. Guillaume responded: “Fundamental journalistic values obligate The Crimson to allow all subjects of a story a chance to comment. … This policy demonstrates a commitment to ensuring that the individuals and institutions we write about have an opportunity to respond to criticisms in order to ensure a fair and unbiased story.”

And that’s where things stand as of this writing.

Having looked over the positions of the parties to this dispute at some length, I’m sympathetic to both. As a journalist, I have to agree that the Crimson not only did nothing wrong in its protest coverage, but also produced a well-written and eminently fair piece of journalism that I’d happily run in DigBoston. Far better than the articles the Daily Free Press—a student newspaper I once worked for—wrote about my fellow Boston University activists and me during the campus anti-apartheid movement in the mid-1980s. Mocking us at every turn… even as its editors threw me off the staff for being too sympathetic to political movements they disagreed with (and, as I was told on the quiet, because the BU administration under John Silber threatened to pull university ads in the paper if I wasn’t removed).

As a longtime advocate for undocumented immigrants, and immigrant communities in general, I understand implicitly why the Act on a Dream activists want to protect undocumented students involved in calling for the abolition of ICE—a position that I support—from harm.

However, I think that the activists have chosen the wrong target in their just effort to make America safe from a reactionary law enforcement agency created in the wake of the tragic 9/11 attack. An agency whose leaders—that fraction of its employees who do their jobs with unmatched racist and nativist zeal, and the politicians who give it marching orders—I dearly hope to one day see up in the dock on charges of crimes against humanity for its baby concentration camps on our southern border.

So I think the best course for the activists would be to drop their petition drive and boycott, and focus on the real enemy, ICE… and the politicians and nativist movements that make its existence possible.

Though I also think that the Crimson could help diffuse the situation by agreeing to publicly list some ways it is willing to alter its reporting practices to avoid harming article subjects like undocumented immigrants. Practices that I typically list under the rubric of the “compassionate journalism” that we try to follow at Dig when dealing with individuals and communities we adjudge to be oppressed by powerful forces like ICE. Or the Republican Party. Or Democratic Party leadership. Or multinational corporations. Or any of the various mafia organizations.

Like only publishing photos of designated activist spokespeople at political actions in support of undocumented immigrants. And not publishing photos—purposely blurred or otherwise—that show the faces of rally attendees.

Or not posting updates about political actions involving undocumented immigrants to the social media accounts of the Crimson or any of its staffers while they are still going on.

Or allowing undocumented immigrants to be quoted using a nom de plume or nom de guerre, as long as the Crimson editors know their real names.

Or delaying publication of certain stories if early publication is highly likely to result in harm to undocumented immigrants.

Those are reasonable accommodations that violate neither the Crimson staffers’ First Amendment rights nor their audience’s right to know about important Harvard developments in a timely fashion.

What is not reasonable is telling the Crimson—or any news outlet—that its staffers cannot contact ICE or any party to any story being reported for comment.

Ultimately, if immigrant activists and their allies remain unhappy with the Crimson—for whatever reason—there is one alternative course they can pursue entirely on their own. Perhaps the best option of all. Like my fellow BU left activists and I did over 30 years back with our bu exposure, they can start their own student news outlet. And they can run it however they want. And they can go head to head with the Crimson in covering issues of the day at Harvard and beyond. And readers can decide which publication does a better job of covering one of the most important social movements of our age on that campus.

Which would be great outcome to an unfortunate fracas. In an age when this nation is losing newspapers every week, rather than gaining them.

Jason Pramas is executive editor and associate publisher of DigBoston. He is also executive director of the Boston Institute for Nonprofit Journalism and founder of Open Media Boston. His column Apparent Horizon is a recipient of the 2018 and 2019 Association of Alternative Newsmedia Political Column Award.