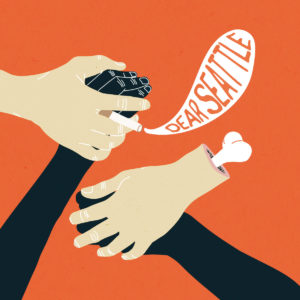 Dear Seattle’s self-titled EP is most suitable for a rainy day, or a sunny day when you feel like the rain. Between the poignant honesty of the lyrics and the insistent power of the guitars, the Australian band’s sophomore release expresses the paradoxical realities of living with emotions.

From the EP’s first lick – on the accusatory lament “The Things You Do” – you know this band has rage. Heavy distortion meets raw vocals, backed by bass and drums that form foot-tapping beats. The band plays with texture often – walls of guitar unravel into arpeggiations and spare, ethereal moments to let the air in. “The Meadows” – one of the album’s highlights – makes use of the band’s dynamic extremes, escalating from soft melancholia to the earth-shattering, guttural scream, “Fuck being sad!”

The EP’s greatest strength, though, is the equity between lyrical and sonic expression. It’s a rare and beautiful thing to find music that not only matches the words, but enhances them. The progression of “Quiet” from lush resignation to the adrenaline-fueled “fuck it, I’m leaving” is chock full of guitar-based nuance – it’s striking. Dear Seattle lives in the tension between two states of mind, grappling with the desire for independence and the painful truth that people need people. With songs that are so open about these emotional complexities, it’s like taking a step into someone’s head – listening, you almost feel like an intruder.

Yet amid the distress of internal conflict, a sliver of light shines through. “Afterthought” is an introspective ballad that builds into a comfortable frenzy, sunny riffs expressing the banality of self-doubt. Even when the singer feels like “nothing,” he insists, “hope tells me that I’m getting somewhere soon.” This glimmer of hope solidifies the EP as an exercise in acceptance – seeing beauty in life’s lowest valleys, knowing that somewhere in the distance, shrouded by the fog of insecurity, there’s a peak.