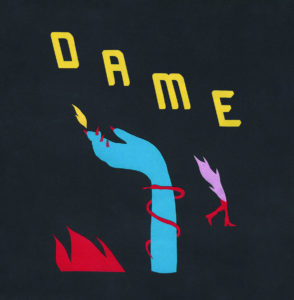 Self-described as, “a triptych of haunting dark pop that pulses with a feeling you can’t name but know from somewhere,” the new self-titled EP from Boston-based Dame is exactly what it sounds like. The three tracks burst out of their gothic atmosphere with flairs of post-punk yet still hold down that traditional melancholy. The new wave-style synths swirl quietly around the hella chorused-out drums and vocals. “Glitch,” my favorite on the release, is elusively both a dancing track and too moody to make you move – the perfect goth rock balance. But the way that Dame’s searing guitar riffs and powerful vocals can alternate as your main focus is what sticks out the most. Listen to this EP, “it hits you hard it hits you hard.”

Dame was self-released on their label Charm School Records, recorded by the five-piece at Side Two Records.

The Hassle has a “radio show”: The Hassle Radio Program #1 is live now.

Jesus Vio is currently based in western Massachusetts and makes a blend of funky, angular pop rock that just makes you feel…