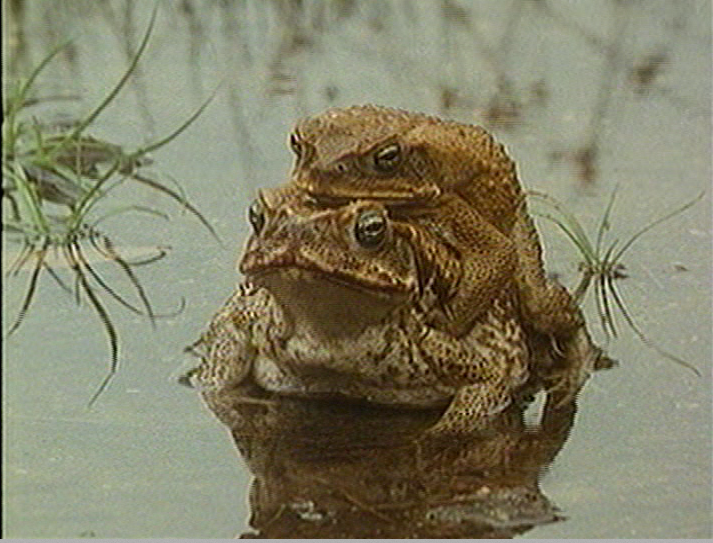 In Cult Case Files, we shine a light on cult classics of the distant past, the alternate present, and the possible future, and try to get a bead on just what the words “cult classic” actually mean. To catch up with the rest of the series, click here.

To kick off this series in earnest, I’ve selected a film which, on its surface, couldn’t be much further from most folks’ conception of “cult cinema.” I would be surprised if it’s ever been programmed at a midnight screening, and it’s likely only ever been a dorm room staple in the most intensely nerdy circles. There are no lovingly crafted t-shirts or enamel pins bearing its imagery on Etsy, and no fan-captioned animations on Giphy. Quoting it in casual conversation will likely yield blank stares. It contains no decapitations, no punk-rock soundtrack, and very little in the way of transgression. The majority of those who have seen it likely first encountered it in their high school biology classroom. On the Venn diagram of “cult classics” and “45-minute nature documentaries,” there isn’t a whole lot of overlap.

All of this is true, and yet, to me, Cane Toads: An Unnatural History is close to the very definition of a cult movie. While I’ve never witnessed a screening or other communal celebration of this film, I have, over the years, met a number of people who have independently seen it. Each of them had been laboring under the belief that they were the only person on earth who had heard of it, let alone loved it. Yet as soon as the title was brought up in conversation, their eyes would light up, and they would breathlessly try to recount their favorite scenes and lines– not in the way one usually describes a movie, but rather as if they were describing a dream they had years ago. To those in the know, Cane Toads is something of a personal secret, a little bit of delirious joy that they carry in the back of their brains, likely assuming they’ll never find someone to talk about it with. This is what a cult movie is: not a catchphrase on a t-shirt, but a secret handshake.

Nominally, Cane Toads is a case study of invasive species and one of mankind’s all-time blunders of agriculture. In the 1930s, sugar cane farmers in Australia came up with a novel solution to a blight of beetles and grubs which were wreaking havoc on their crops: they would import a population of cane toads, a carnivorous amphibian native to Hawaii, to hunt and regulate the pesky insects. What they did not anticipate, however, was the speed and prolificacy with which the toads reproduce: a single female might lay upwards of 40,000 eggs a year, and, in the absence of natural predators, most of those eggs have a good chance of reaching adult toadhood in a matter of weeks (they also failed to realize that the outback’s arid climes would keep the toads from sharing an environment with the bugs they were supposed to be eating). In the years that followed, these loud, enormous, poisonous creatures would spread across the continent, becoming one of the most dramatic cases of manmade environmental chaos in recorded history. 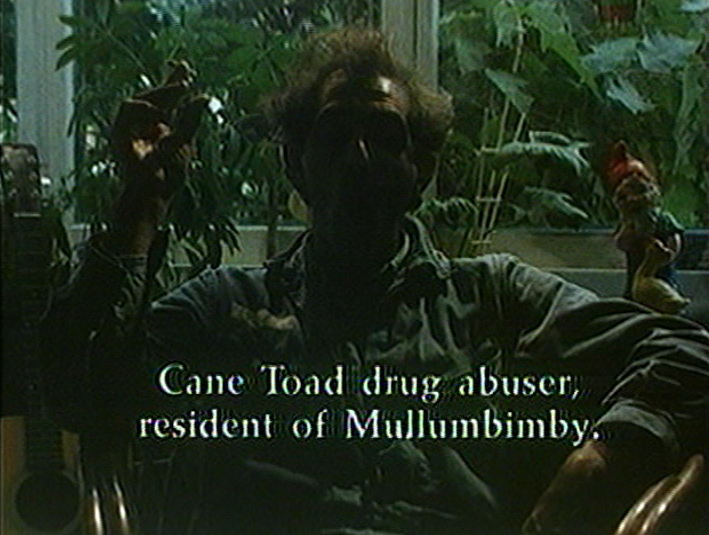 On its own, this is a fascinating story, which is likely the reason Cane Toads has endured as a classroom staple for more than thirty years. But director Mark Lewis is far less interested in the science of the cane toad invasion than he is in the cultural space the toads occupy. He interviews an elderly couple who consider the toads indoor-outdoor pets, leaving dishes of catfood out for their enjoyment. On the other end of the spectrum, we meet a man who spends his time tooling around country roads in his VW Microbus, swerving back and forth to hit as many as possible. A librarian displays a book, bound in toad-leather, which he presented as Queensland’s official wedding present to Charles and Diana. A little girl tucks her pet toad, Dairy Queen, into a tiny toad-bed in her dollhouse. A mustachioed man, his identity shrouded in darkness, describes the psychedelic pleasures of cane toad venom. The overall effect is something like an Errol Morris film disguised as a David Attenborough nature documentary.

Then there are the toads themselves. While it would perhaps be a stretch to call the cane toad photogenic, there’s something about its rumpled, pissy demeanor that gives it a sort of Keatonesque straightman quality, especially when contrasted against the film’s loopy human Aussies. Much of the film consists of close-up reaction shots or a hopping POV “toad cam,” and there are even staged “dramatic” scenes: you will see toads intruding on a man singing loudly in the shower, and a doomed toddler (with the improbably Australian name of Edgar) teetering dangerously close to one of the venomous creatures. Cane toads might not be great actors, but you likely won’t forget their performances anytime soon. 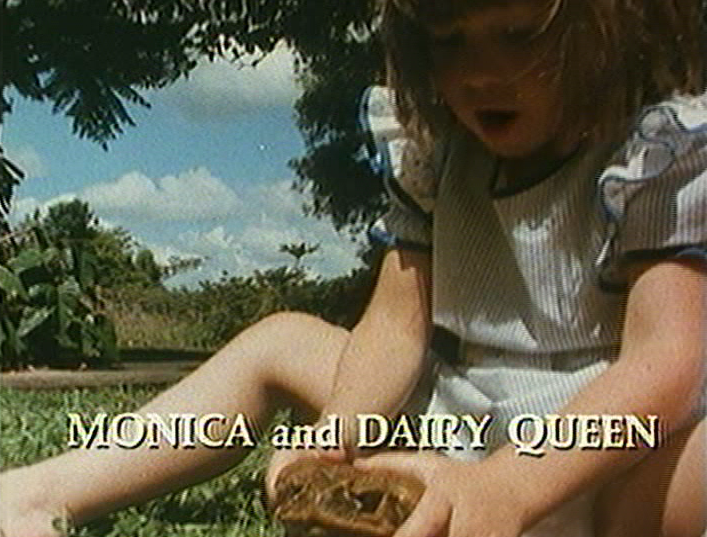 And as I said, people who see this film don’t forget it. I myself was not shown Cane Toads in school, but one of my best friends was, and I remember him breathlessly telling me about this wild movie he saw in class that was supposed to be about toads, but was mostly about crazy people (he even attempted to sing a portion of the theme song, the loping, acoustic “Cane Toad Blues” by Split Enz frontman Neil Finn!). I assumed at the time that he was exaggerating, but his description stuck with me. Years later, I stumbled across a used DVD of the film (at Newbury Comics, back when they had a dedicated movie room), and realized that, if anything, he had been underselling it. What’s really remarkable is that, in all the times since then that I’ve met someone else who knows of this film’s off-kilter charms, I have never been the one to bring it up; it always comes up organically, with an anecdote about how weird Australians are about cane toads, or perhaps an offhanded quote (often in conjunction with a trip to Dairy Queen). When I mention that I’ve seen that movie too, they look at me like I’ve just said that I’ve met their imaginary friend.

It’s this sense of ownership, to me, that makes Cane Toads the quintessential cult film. When we think of cult, we often think of communal experiences: Rocky Horror screenings and Star Trek conventions and Big Lebowski lookalike contests. But these mass gatherings are only the end stage of cultdom– the symptom, not the cause. Long before a film inspires fan-fiction and Halloween costumes, you have to have a Patient Zero, that one oddball who sat alone through an empty matinee or picked up that dusty tape at the thrift store, who spent weeks walking around with this weird-ass movie rattling around in their head before they could convince anyone else to watch it. Behind every midnight movie, there’s a handful of freaks who know that this is their favorite movie and no one else’s. Sometimes, like the cane toads themselves, this passion will spread across the country, until the line between “cult classic” and “classic” becomes blurred. More often than not, however, these cultists resemble the humans in the film: weird, isolated, and deeply, deeply passionate about their ugly little pets.

FURTHER STUDIES: Lewis has spent the past several decades directing similarly cockeyed nature documentaries for public television (his 2000 feature The Natural History of the Chicken still pops up from time to time on WGBH, usually during pledge week). In 2010, he released a sequel, Cane Toads: The Conquest, which was the first Australian film shot entirely in 3D. As soon as movie theaters and museums are once again going concerns, I plan on demanding the Museum of Science program it at their IMAX screen.

WHERE TO FIND IT: At press time, Cane Toads: An Unnatural History can be streamed via Kanopy, a free (and awesome) service available to anyone with a library card, or with the CuriosityStream addition to your Amazon Prime account. It was released on DVD, but is currently out of print and steeply priced. And, of course, there’s always YouTube.

NEXT TIME: We examine a failed-pilot-turned-feature from an unsung legend which could have changed the course of American TV comedy– but didn’t.