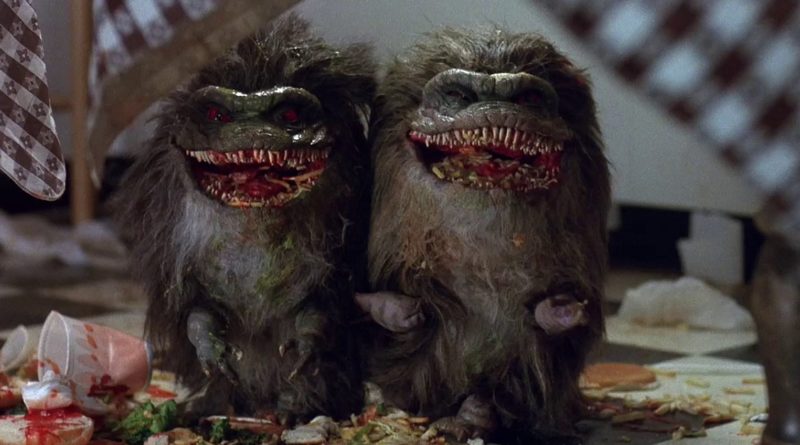 As a student of film history, I sometimes think about the things we’ll have to explain to future generations of moviegoers. We’ll try to recall how superhero movies were dramatically uncool for more than a decade, before assimilating and supplanting all other forms of entertainment. We’ll reminisce about where we were during Envelopegate, just as our parents recall the Kennedy assassination or the Blizzard of ‘78. And we’ll have to do our best to explain how, for much of our childhoods, “Gremlins” was not just a movie, or even a franchise, but a genre.

For that matter, I’m not sure I understand it. I was born the same year Joe Dante’s irresistibly perverse (and rating-reshaping) creature comedy dropped, and thus have never lived in a world without its influence. As far as I can tell, the timeline goes like this: Gremlins premiered in 1984, and made mountains of money on its lovably nasty worldview and eminently marketable monsters. Presumably, low-budget exploitation studios, then experiencing a boom market thanks to the rise of home video, saw a prime opportunity: all they needed to do to replicate Gremlins’ success, it seemed, was a handful of goofy rubber puppets and a catchy title. First out of the gate, as was so often the case, was Full Moon Studios, whose Ghoulies became a rental staple in its own right (thanks in large part, undoubtedly, to its all-time great cover). Others followed suit: Munchies, Hobgoblins, Puppet Master, Neon Maniacs, the infamous Troll 2 (originally titled Goblins), and– the subject of tonight’s midnight screening at the Coolidge– Critters began populating the shelves at an alarming rate. For lack of a better explanation, I’m just going to assume someone spilled some food on a Gremlins tape after midnight.

To say that Critters is the best film of the bunch may seem like damning with faint praise (and to be fair, it kind of is), but it is an enjoyably dumb little creature feature, with a game cast and zero pretensions about what it’s supposed to be. The titular critters are officially known as Krites, a race of adorably malevolent aliens who escape a prison ship and make their way to a small town in middle America. Specifically, they land in the farmyard of the Brown family, led by perennial genre-mom Dee Wallace (E.T., The Hills Have Eyes, The Howling, and about a million other movies you love). Also landing in the town are a pair of shapeshifting alien bounty hunters (one of whom takes the form of the hilariously fictional rock star Johnny Steele), following the Krites in distinctly Terminatorial pursuit. Inevitably, the Krites start devouring their way through the supporting cast, including M. Emmet Walsh as yet another town drunk, and teenage lothario Billy Zane. (A side note: has the time come yet for a Goldblum-style reappraisal of Billy Zane? Dude may have been in a shitload of terrible movies, but he’s pretty much always been entertaining. He’s straight-up great in Demon Knight, and even acquits himself reasonably well as the second-worst character in season two of Twin Peaks. I’m going to throw down the gauntlet and coin the phrase “Zanaissance” right here and now.)

Anyway. Like I said, Critters is a stupid movie, but it’s a perfectly stupid movie. The Krites themselves are probably the best-looking of the not-Gremlins; you can thank the Chiodo brothers for that, the practical-effects gurus best known for Killer Klowns from Outer Space (which could arguably also be placed in this peculiar genre) and the Large Marge sequence from Pee-wee’s Big Adventure. Like its fellow stablemates, Critters has the freedom to be nastier and more graphic than its Spielberg-sanctioned inspiration, but, unlike many, it never loses track of its sense of fun. It’s a movie designed to be taken home after work with a large pizza and a six-pack (preferably all acquired at the same strip mall), or smuggled into a preteen slumber party by the one kid whose parents never checked ratings. It may not be enough to explain the existence of the Gremsploitation genre, but it’s fun enough to make you stop asking anyway.