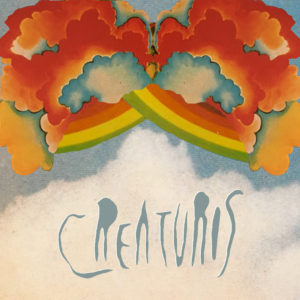 Sometimes you need the perfect song to cruise through the early summer haze and luckily, Boston fuzz rockers CreaturoS have delivered 12 that fit the bill on their new s/t full length. Varied jams and eclectic sounds permeate the album which no doubt dwells under the bands self-described moniker of “garage psych”; though such a reductionist descriptor seems inappropriate as the sophistication present here has been cranked to 11.

Opening track “Truth” starts things off with the that warm, fuzzy punk that CreaturoS have made all their own before moving in to the clap inducing basement pop of “Earth King” which has just enough underlying scuzz to keep the listener firmly rooted in the bands unwavering DIY aesthetic. “Theresa” is some killer power pop and is destined to become a sing-a-long crowd favorite with its summer of love guitar parts and an abrupt ending that still seems to meander into follow up track “Cuckoo’s Nest” who’s Sunday sermon-esqe opening gives way to dirty, accelerated surf punk juxtaposed against the ethereal, dreamy vox that help ground CreaturoS rough yet purposeful instrumental elements.

Short tracks lend to a continual feel that helps blend the entire album into a singular, concerted, tie die flavored motorcycle cruise through the desert. “Be Real” begins with beautiful finger plucking that bursts into fist thrusting, head banging frenetic facsimiles of mid-60’s proto punk. Equal parts Iggy Pop and Steppenwolf, the album masterfully weaves in and out of quiet, focused moments of heavy and melodic back beats and screaming, fiery eruptions of six string prowess often culminating in a sudden drop off a cliff. As you’re falling toward the ground, CreaturoS help you sprout wings and seamlessly glide you in to the next jam. The album ends with the aptly named “Big Bang” – a full blown, gargantuan garage giant that would be at home played in a PBR soaked cellar or a stadium. The songs hypnotic repetition closes out the LP with a frenzied whirl.

It’s not hard to see why CreaturoS wholly unique brand of psych punk has become a staple of the Boston music scene. You HAVE to check out this album when it drops on Friday. What better place to snag a copy and catch some of these tracks live than KLYAM’s second annual Rama Lama Ding Dong on Friday 6/16 @ The Middle East! Alongside CreaturoS, the event features The Monsieurs, Littlefoot, Germ House, Jim Leonard, and Johnnie and the Foodmasters. What can I say, it’s only rock n’ roll but I like it.