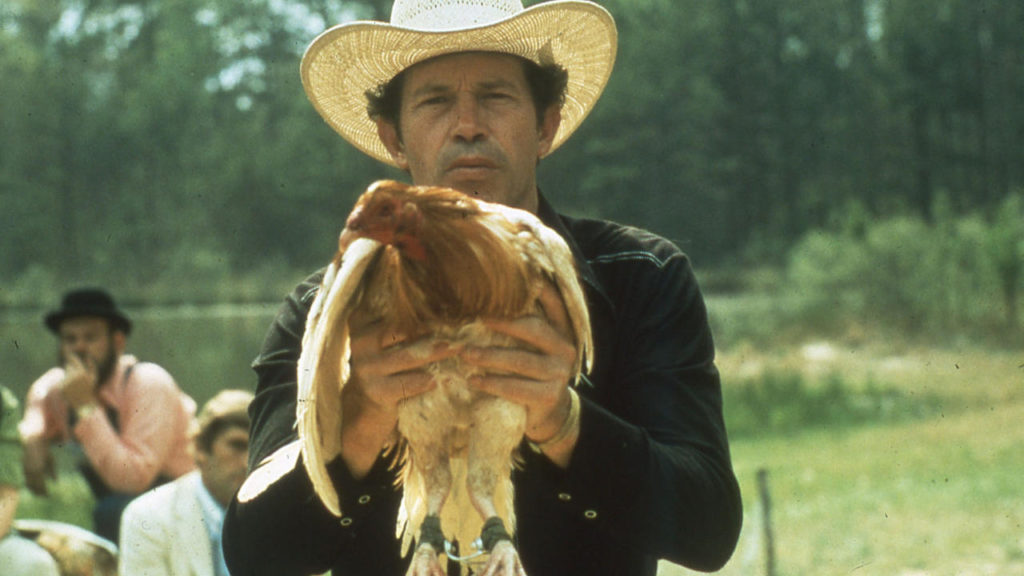 “To my knowledge, no one had ever made a picture about cockfighting,” producer Roger Corman recalled in his autobiography. “Now I know why. No one wants to see a picture about cockfighting.” This is possibly true; it’s unlikely that cockfighters will supplant superheroes at the box office anytime soon. It’s also true that, of the literal hundreds of films which bear Corman’s name in the credits, Cockfighter is one of the very few that failed to turn a profit. Which is a shame, because (at the risk of damning with faint praise) there is a very real chance that it’s the absolute best of the lot.

You certainly can’t accuse Cockfighter of false advertising. The great Warren Oates plays Frank, a career cockfighter who has taken a vow of silence until he can claim the crown of Cockfighter of the Year. His nemesis is Jack, played by the equally great Harry Dean Stanton. When Frank loses everything betting on a crooked bird, he has to climb his way back to the top with nothing but the shirt on his back and the chicken under his arm. From there, it follows an offbeat version of the standard sports movie journey, only with cockfighting (this is probably a good time to warn you that Cockfighter probably wouldn’t receive a PETA stamp if it were made today) and the odd, hauntingly existential rhythms of its director, Monte Hellman.

Of the countless filmmakers nurtured by Corman over the years (whose ranks range from Martin Scorsese and Francis Ford Coppola to James Cameron and Ron Howard), Hellman is far from the most famous, but he’s one of the most interesting. After cutting his teeth working under Corman for American International Pictures (he was one of the many young directors to try to salvage Corman’s infamous The Terror, along with Coppola, Jack Nicholson, and Jack Hill), Hellman set off on his own to make the landmark independent film Two-Lane Blacktop. Like Blacktop, Cockfighter is deceptively unclassifiable, using genre movie signifiers to disguise a mysterious, oblique character study. Also like Blacktop, Cockfighter is surprisingly gorgeous, its sun-drenched cinematography courtesy of frequent Terrence Malick collaborator Néstor Almendros. And it’s stocked with a veritable murderer’s row of character actors; in addition to Oates, Stanton, and their Blacktop co-star Laurie Bird, watch for Troy Donahue, a pre-Manson Steve Railsback, and a shockingly young Ed Begley, Jr.

Anyway, perhaps I’m hitting up against the reason Cockfighter didn’t make Roger Corman any money: it’s really hard to explain what makes it so intriguing. But it’s just as compelling as any landmark of the 1970s’ New Hollywood, without the cultural baggage that makes it tough to view Easy Rider or The Godfather with fresh eyes. It’s also rarely screened, not streaming, and only intermittently available on DVD, so relish this opportunity to catch it on 35mm (courtesy of guest Brattle programmer Debra Granik). You may have ever felt the desire to see a picture about cockfighting, but if you only see one, this is absolutely the one to see.