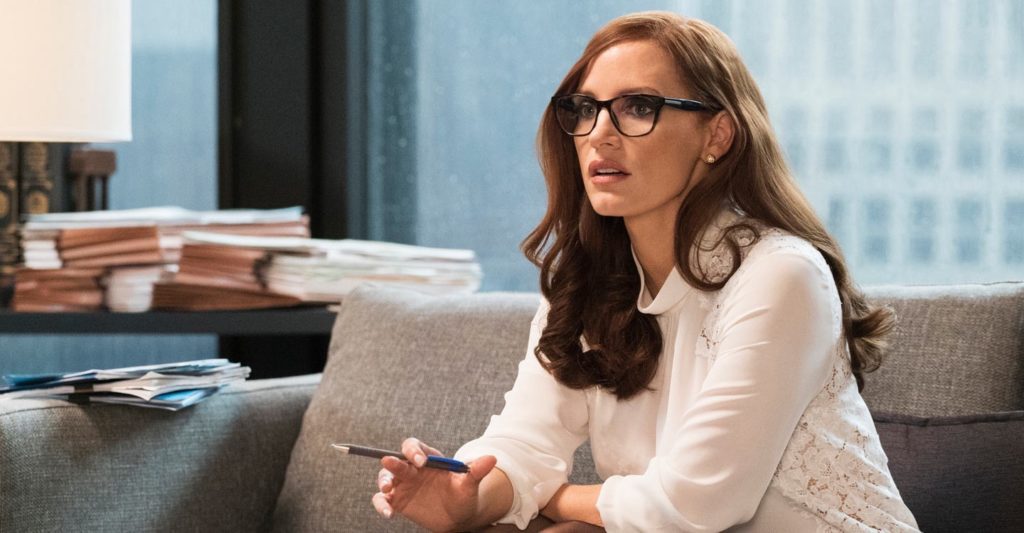 Molly Bloom (Jessica Chastain) comes from a family of overachievers. A skier hoping to compete in the Olympics, her chances of a medal are broken when she crashes hard during her tryout run. With no real plan, but wanting to take a break before law school, she heads to Los Angeles. By chance, she ends up working for a man (Jeremy Strong) who runs expensive poker games for celebrities. Her boss asks her to help run the games, and Molly is drawn into the underground poker world.

This film skillfully jumps back and forth from the past to the present, when Molly has been incited in illegal gambling with the mafia. She shares her story with her lawyer, Charlie Jaffey (Idris Elba), and he helps her navigate the FBI and the court system.

Since it’s Aaron Sorkin, this film’s screenplay is top notch, as is the acting. Sorkin’s screenplay aptly combines dark humor with banter and backstory. Combined with Chastain’s delivery, the screenplay results in a darkly hilarious crime biopic. Several reviews claimed this was Chastain’s best role to date, and I couldn’t agree more. Elba matches Chastain beat for beat in most scenes, and their combined talents are a joy to see.

This film also puts together a realistically complex set of themes about family, especially considering this is based on true events. I didn’t know Molly’s story when I saw the film, but the sheer intensity of the poker games, along with the screenplay and acting talent, were enough to make me love it pretty much instantly. Though this film may seem like an odd little crime flick, it’s so much more than that. It’s being real truly helps, and I can’t recommend it highly enough.

Streaming is no substitute for taking in a screening at a locally owned cinema, and right now Boston’s most beloved theaters need your help to survive. If you have the means, the Hassle strongly recommends making a donation, purchasing a gift card, or becoming a member at the Brattle Theatre, Coolidge Corner Theatre, and/or the Somerville Theatre. Keep film alive, y’all.
Liked it? Take a second to support Noemi Arellano-Summer on Patreon!