At the time of its release Orson Welles described Chimes at Midnight (1965) as a story of a friendship betrayed.  He would also credit it as his personal favorite or most well realized project.  Due to a damning early review from a New York Times critic and copyright issues, the film has been seldom seen in America.  Thanks to the Criterion Collection and a certain uptick in revisionist Welles scholarship, this lost treasure is finally seeing some light.  It plays at the Brattle Theatre tonight (see details below) and is a worthy, if peculiar installment of their Shakespeare on screen weekend.

Chimes at Midnight is a liberal reimagining of elements of a handful of Shakespeare histories, mostly Henry IV parts 1 and 2.  Welles reframes the narrative through the comical bit part of John Falstaff, a drunken friend of the young Henry V.  In Shakespeare’s play, Falstaff is mocked and then roundly denounced with chilling finality by the newly crowned king: “I know thee not, old man.”  From Welles, Falstaff is humanized.  Text is cut, rearranged and all out rewritten to tell Henry V’s rise from the perspective of his erstwhile drinking buddy.  While a great deal of this retelling is played for laughs, it is also a manner of critique.  Welles focuses the arc of history as it relates to the common folk in the taverns and brothels.  This stylized populism is given considerable heft, a joke the film leans heavily on (pun very much intended), by Welles’ portrayal of the central buffoon.  His Falstaff is relentlessly shown up as a liar, a drunk, and an infirm and cowardly old man.  Yet, as the tale is retold, these foibles are subsumed in Falstaff’s loyalty and love of life.  While Falstaff is no conventional hero, Chimes at Midnight questions the criteria by which character is judged. 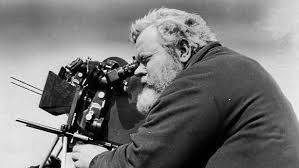 This consideration brings Falstaff closer to Orson Welles the actor, an eccentric and oft-mocked giant of entertainment who seemed to have lost himself in gluttonous hedonism.  Through his primary passion Welles suggests that he never lost his way, but perhaps the public misread his character in the first place.  Falstaff is a boisterous embodiment of what theatre was for Welles; a singing, dancing, constant source of invention.  A life made innumerably better through every great and small performance. Then too there is Henry V’s, called Prince Hal, initial friendship to Falstaff.  Welles had a distant and unfulfilling relationship with his father, who died before Orson graduated high school.  Throughout his life, and especially in the theatre, Welles sought surrogate father figures.  To Prince Hal, Falstaff is a benevolent and far more present father than the King.  History records the battles and the transfer of power but pays little mind to humanity.  Welles devoted himself more to his craft than his family and thus feels justified in filling in what he feels Shakespeare left out.  There is a level of radical arrogance to this, but Welles’ fealty to the stage and the players is undeniably primary and invigorating.

For its reported shoestring budget and creative financing, Chimes at Midnight looks incredible.  Aside from a couple of abrupt cuts the hasty, pickup shooting schedule is completely hidden.  The central battle, while of debated importance to the narrative, is a stunning set piece.  Welles jump cutting, manipulation of film speed, and gratuitous handheld camera set the stage for more modern interpretations of warfare.  Like much else here the theatre of war is rendered in both slapstick and poignant strokes.  We are meant to laugh at the portly Falstaff waddling from danger, but what then of his reckoning what honor could mean to a dead man?  If it draw the curtain what doth it profit a man?  Maybe the better part of valor is discretion.  Let’s have another round for these freaks and these soldiers, a round for these friends of mine.