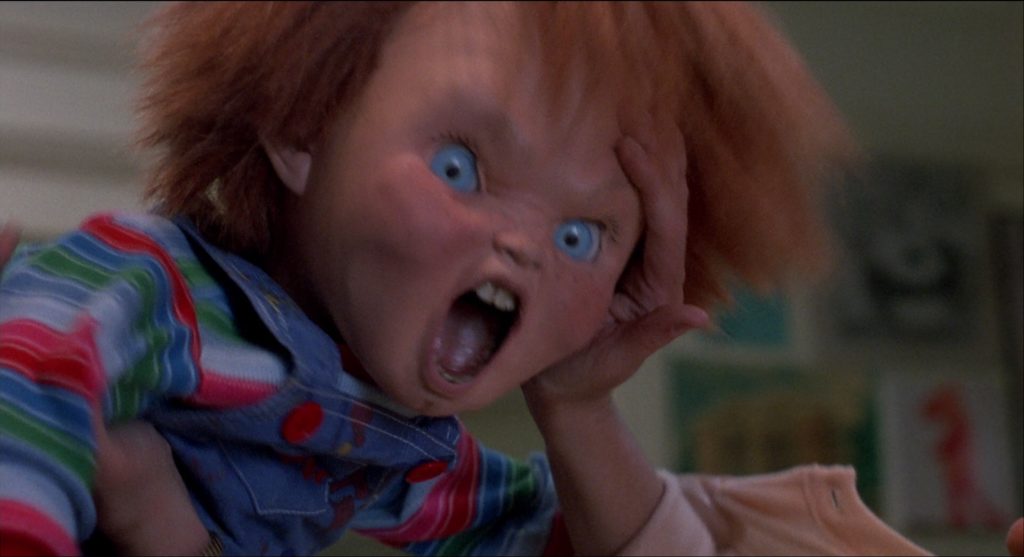 Long before Scream laid down the law on horror cinema’s “very specific formula,” it was accepted as a truism that iconic slashers never actually die. Whether hacked to bits, repeatedly shot point blank, or burned to a crisp, the iconic killers of the ‘80s horror boom would always find a way to return for yet another sequel. By the turn of the millennium, however, these monsters faced a threat far greater than a plucky final girl: public indifference. Following a period of attempted post-Scream self-awareness, most major horror franchises found themselves rebooted by the late 2000s, their edges sanded down to a bland post-millennial sheen. These reboots, in turn, mostly failed to ignite just about anybody’s interest, sending their antagonists into convalescence. This year’s surprisingly great Halloween sequel (and its loving fidelity to the original) may very well mark a turning point, but as it stands, most of horror’s greatest mascots are well and truly dead.

With that in mind, let us raise a toast to Charles Lee Ray, better known to the world as the lovably sadistic possessed doll Chucky. While often dismissed as a second-tier franchise, the Child’s Play series has proven to be perhaps the most surprisingly durable. Where sagas like Halloween and Friday the 13th struggled to maintain relevance in the savvier-than-thou ‘90s, Chucky creator Don Mancini embraced the black comedy inherent in the premise to create the series highlight Bride of Chucky in 1998 (though its follow-up, 2005’s Seed of Chucky, is maybe a little too silly for its own good). Then, in 2013, when the reboot cycle was well underway, Mancini bucked the trend with Curse of Chucky, which cleverly uses the language of the clean-slate reboot as a trojan horse for an honest-to-god sequel, while its successor, Cult of Chucky, brings together characters from all three of the series’ incarnations. Bittersweetly, the inevitable Child’s Play remake has finally been slated for next year (opening opposite Toy Story 4!), but Mancini and series star Brad Dourif are reportedly plotting a continuation of their story on television– which, given Mancini’s recent TV work writing for the excellent Hannibal and Channel Zero, is actually pretty enticing. 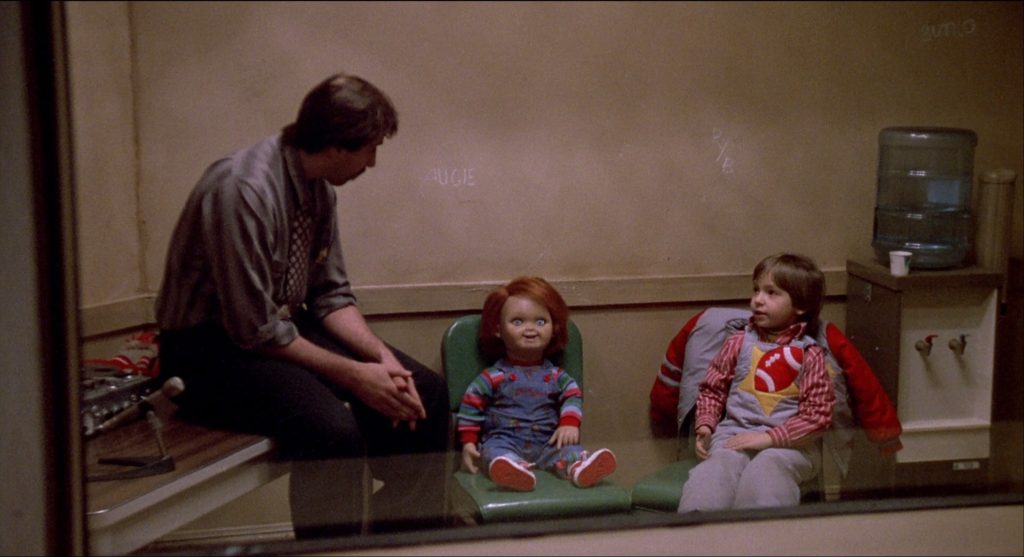 But all of this would have been impossible (or, at least, uninteresting) if the series weren’t built on a solid foundation. Revisiting it today, it’s remarkable how well the original Child’s Play holds up, especially in comparison to its peers. Released toward the end of the ‘80s slasher boom, Child’s Play actually doesn’t follow the typical slasher formula much at all. Rather than the genre’s typical cabin in the woods or suburban idyll, Chucky stalks the streets of downtown Chicago. Instead of picking off interchangeably attractive teenagers, Chucky’s victims are mostly mob informants and lowlives, and his central nemeses are a single mother, a homicide detective, and a young boy. And unlike most ‘80s slasher films, which play their premises either straight or for camp value (looking at you, Mr. Krueger), Child’s Play functions as a gleeful black comedy, playing its central absurdity to the hilt while managing to keep its characters, and the threats they face, grounded in something resembling reality (credit here is probably due to Mancini, who holds the remarkable distinction of writing every single Chucky outing to date).

Then, of course, there’s Chucky himself, who stands as one of the most singular villains of the slasher era. Unlike the silent, shark-like killing machines Jason Voorhees and Michael Myers, or cosmic jester Freddy Krueger, Chucky is an actual character. Despite his ostensibly cartoonish nature, Chucky comes off as a real (albeit psychotic) person who happens to be trapped inside a child’s toy. In voicing the character, Brad Dourif injects just the right amount of irony, while never losing track of the fact that Chucky’s true monstrosity comes from the fact that he’s simply an awful person. (Dourif, incidentally, should be in anyone’s Character Actor Hall of Fame; he’s an Oscar nominee with a major role in the most lavish epic in film history, who has worked with such filmmakers as David Lynch, Werner Herzog, and John freakin’ Huston, and who still cranks out several straight-to-video horror movies a year. He also played one of the greatest one-off characters in X-Files history, but I’m getting way off track and should probably get back to the killer doll.) 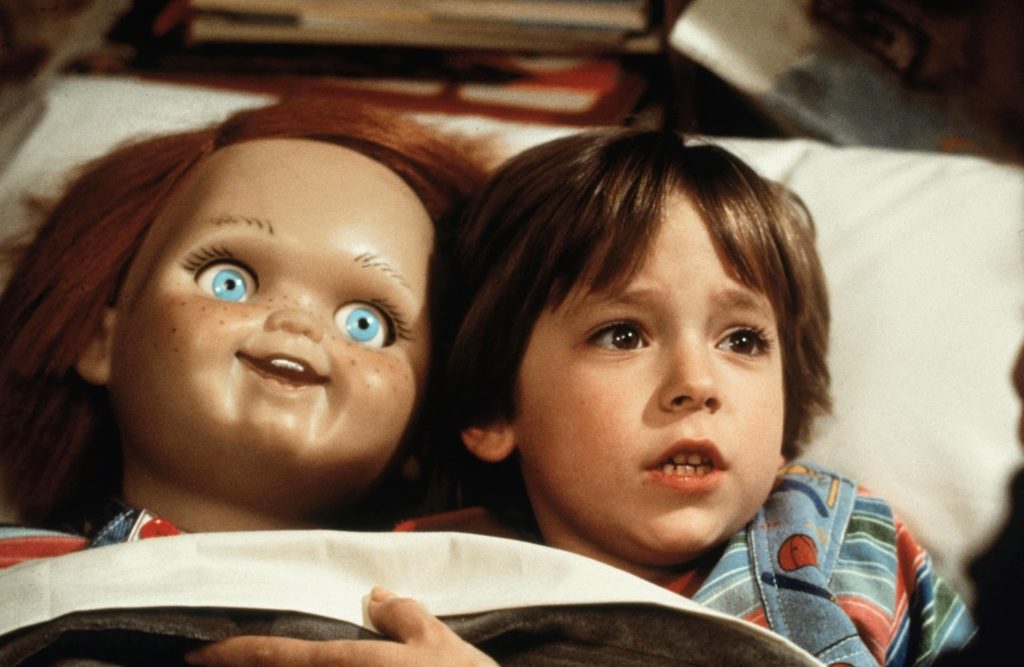 But as far as Chucky’s legacy goes, Dourif’s performance, great as it is, may actually be gravy. The idea of a living doll with the soul of a serial killer is a great one in itself, and it arrived at the absolute perfect moment. As a child in the late ‘80s and early ‘90s, most of my friends were generally scared of Freddy, Jason, and their pals, but we didn’t really understand them; they were just scary looking dudes glaring at us from VHS boxes as we scurried past to rent cartoons. Chucky, however, was different: even without knowing anything about the story itself, any kid can look at the cover of Child’s Play 2 and instantly understand the exact nature of the threat. Your dolls will come to life and kill you, AND break your other toys! Perhaps more than any other movie monster, Chucky struck real, specific fear in the hearts of children in the age of home video– and, against all odds, he’s still on the prowl.