Caitlin Duennebier is a Connecticut-raised artist currently living and working in Boston. She has studied at MASSART and the University of the Arts London. Her most recent show was called IT WAS PRETTY VIOLENT. Her totally awesome art CURRENTLY adorns the Hassle website and can be found all around these words you’re reading. I checked in with Caitlin recently and asked her a few questions . . .

(This is where I laugh nervously) I studied photography at MassArt and quickly after graduation in 2009 moved to London and got married to a British man-child. After several jobs in the photography world, I slowly became disheartened by how it all worked. On a whim, I started painting about three years ago. I had this amazing studio in an old building called Panther House right in central London and it allowed me to just sit for hours making odd paintings even more unusual. I worked under the name OH PAPA to make a clean break from my photography. About a year ago I moved back to Boston after my marriage broke down. London is an amazing city but it can be very lonely sometimes.

Actually, just last week I had to do an alumni talk at MassArt. I pretended I was an old weathered woman chain-smoking and told my sad sad story of life after graduation. Everyone laughed and clapped and then later realised it was true and probably thought I was just a big weirdo.

This past year has been amazing. It’s been a great change to have a proper summer and insane winter. At the moment I’m doing several projects for this summer with my sister Nicole Duennebier—she’s an amazing painter. We’re collaborating on these big dioramas for the window of Space Gallery in Portland ME called “Massacre Near Gumdrop Mountain” and a series of three paintings for the “Isles Arts Initiative” at the Boston Sculptors Gallery. 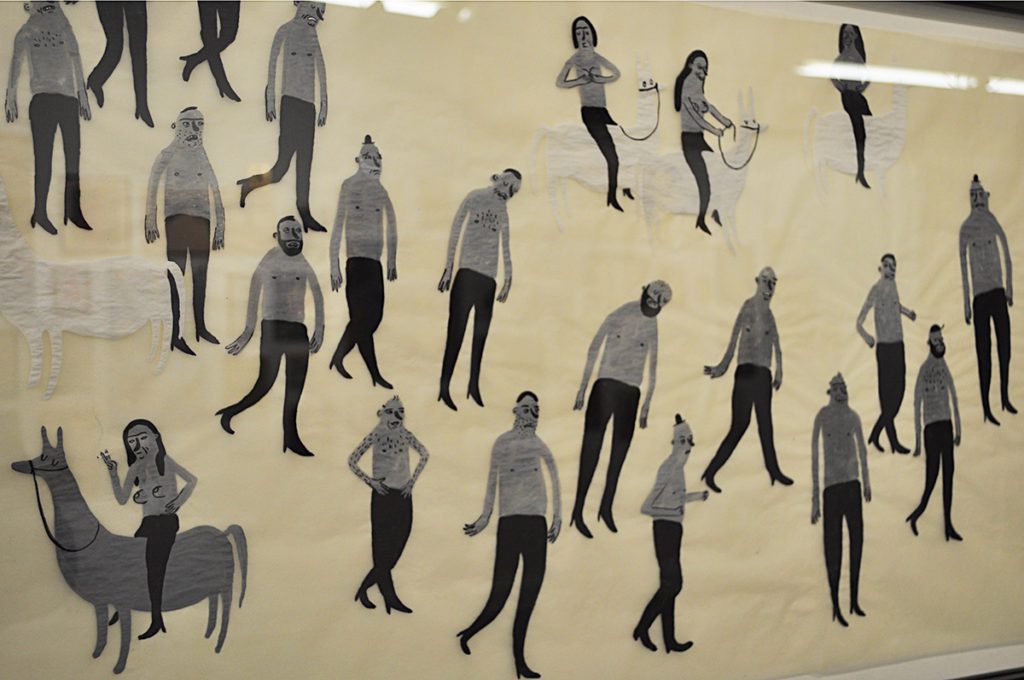 You grew up in Connecticut, whereabouts? Growing up, was Boston, or even Boston art, on your radar in any way?

I’m from this tiny town called East Hampton, and we lived in a tiny house by the woods. Boston was never on my radar. We never traveled much outside CT. I remember most of my childhood just running around in the woods with my sister or walking down to the Food Bag to buy candy and a gallon of milk. My mom was a painter and she encouraged us to be creative, and my dad would bring us to Cinestudio in Hartford where he used to be a projectionist. Through watching good films I believe that’s where we did a lot of our traveling and gained cultural knowledge.

What initially really drove you toward a life (and hopefully career?!) in art? What drives you now, and what’s changed between then and now?

My family was always pretty creative and supportive. Elvis Costello, the Specials, and the likes were always blaring through the heat vents from my dad’s musical labyrinth in the basement and my mom was constantly reading (and yelling at him to turn down the music). My dad taught me how to use his darkroom at a young age and develop my own photos. I liked the rhythm of photography and having my own quiet space to make artwork. Now that I think about it—I was a young girl that liked hanging out in a dark and cold red-lit cave.

Things haven’t changed much. These days I have a studio in my attic—which has become an odd hovel of sorts. If you ever drove down my street you’d most likely see me in the top window tinkering away at various things. I’m always hoping that friends will come bring me donuts—or at least throw donuts in my window. Sadly, this has not happened yet. 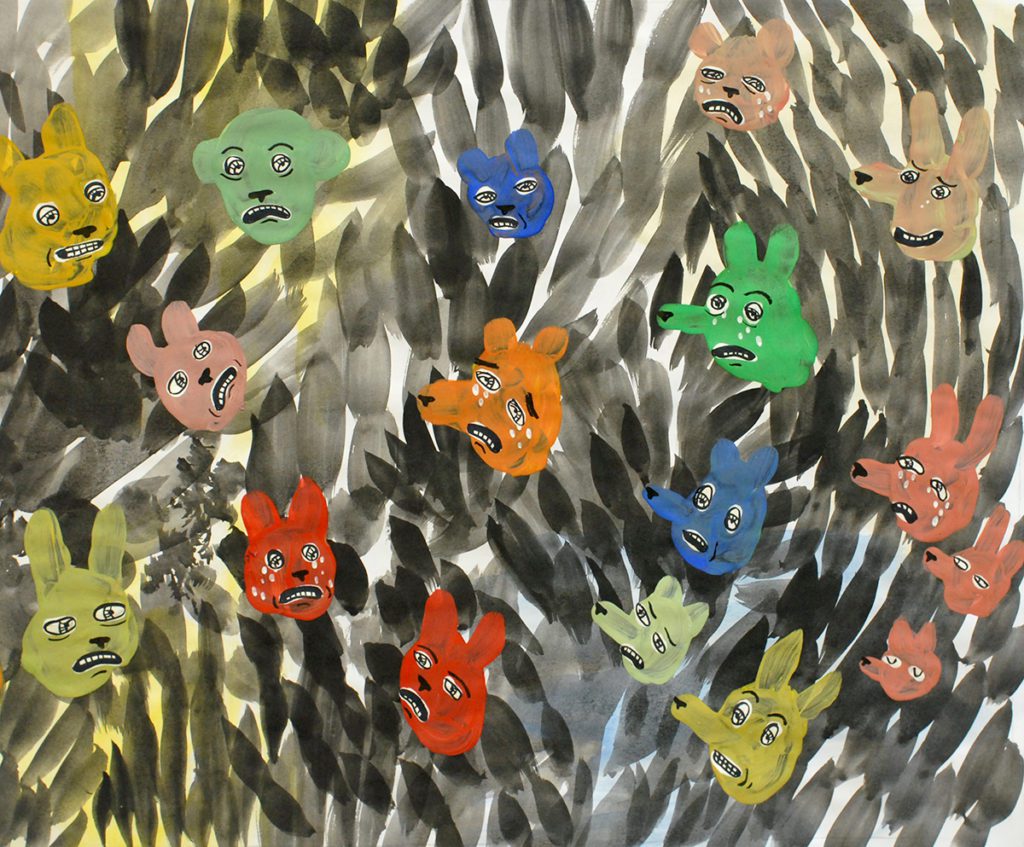 What’s your formal art background? I saw on your website that you studied both in Boston and in London. How were those experiences for you? Can you compare the two experiences, schools, cities at all?

I studied photography at MassArt in Boston and received a scholarship to study abroad at University of the Arts London. It was an amazing experience, as I had never been to Europe before and had never lived in a city bigger than Boston. The London art scene was far more conceptual—critiques were about what books you read to make the image. In Boston it was how you technically made the image and your emotions behind it. I got a bit of both worlds and I’m grateful for that—I think it’s made my practice stronger.

What are you thinking about when you are preparing new work? If possible, summarize your process of creation.

I’m a big people watcher and I get a kick out of the smallest gestures or facial expressions. I’m constantly noticing weird interactions and laughing to myself. Just the other day I saw an angry man with a furrowed brow standing next to a stupid-looking dog—what’s going on there? I love that—and usually take it home to my studio. I have a tiny mirror on my desk that I pull faces at and paint the expressions. 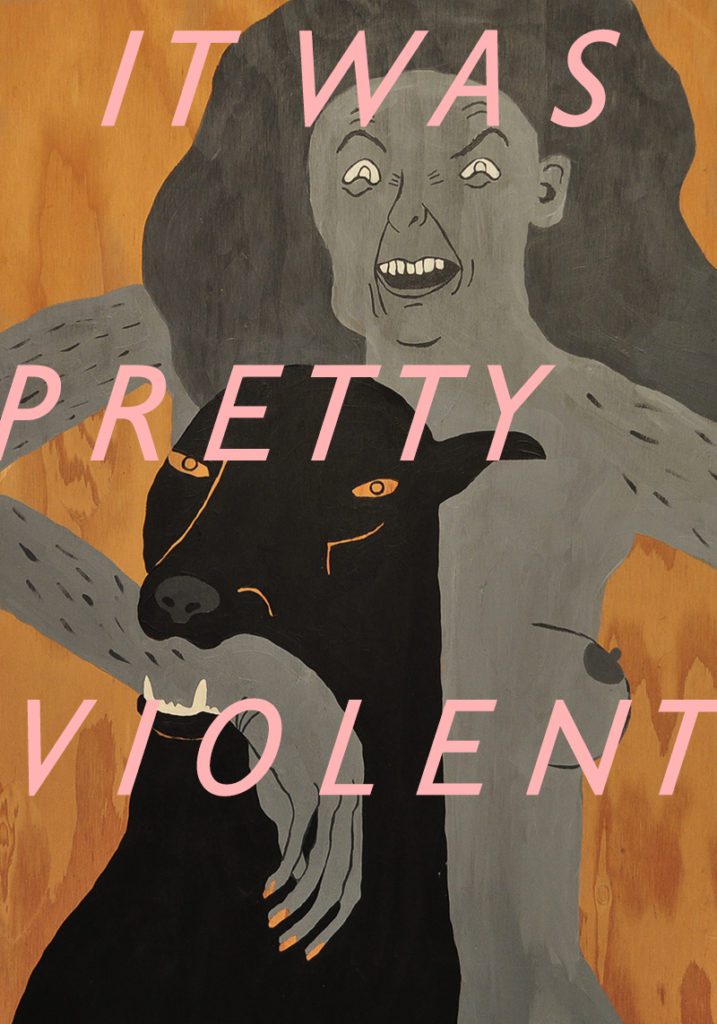 I asked you to make us some art and a header for the site after I learned of your most recent show, IT WAS PRETTY VIOLENT @ the THOMAS YOUNG GALLERY in Boston. How was the show? Any takeaways?

The show was a blast! It’s often just me in my studio laughing while I make work, so it was a nice change to see everyone come and laugh at my work as well. My friends helped me make hundreds of teeth out of clay and I scattered them all over the floor. I was hoping people would steal them and they did! I always enjoy shows where you can take something away. I like to imagine people the next day smiling when they find the teeth in their pockets. 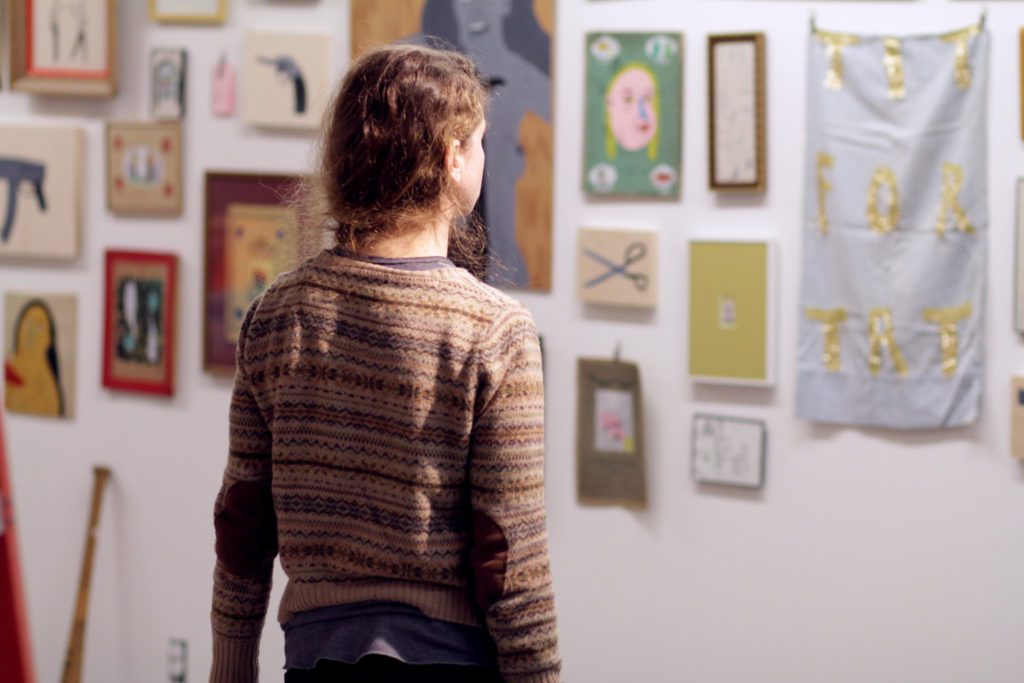 How would you describe Boston’s art scene/ community or scenes/ communities as they exist right now?? What do you want to see and hope to see happen in the future in Boston’s art world?

I find Boston’s art scene really welcoming compared to London. Artists seem very willing to help, collaborate, and point me in the right direction. I’ve met a lot of really lovely and creative people like Sarah Gay-O’Neill who taught me animation and Jamie Horgan who introduced me to a new way of creating music. There also seems to be a lot more leeway for experimentation in Boston. People seem far more supportive when you want to try something new —which I feel makes others more cognizant of the art around them.

I am sad to see smaller galleries like Lincoln Arts Project and Fourthwall Project closing down. They are important for up-and-coming artists to get their work shown, and I hope to see more of them popping up in the future. 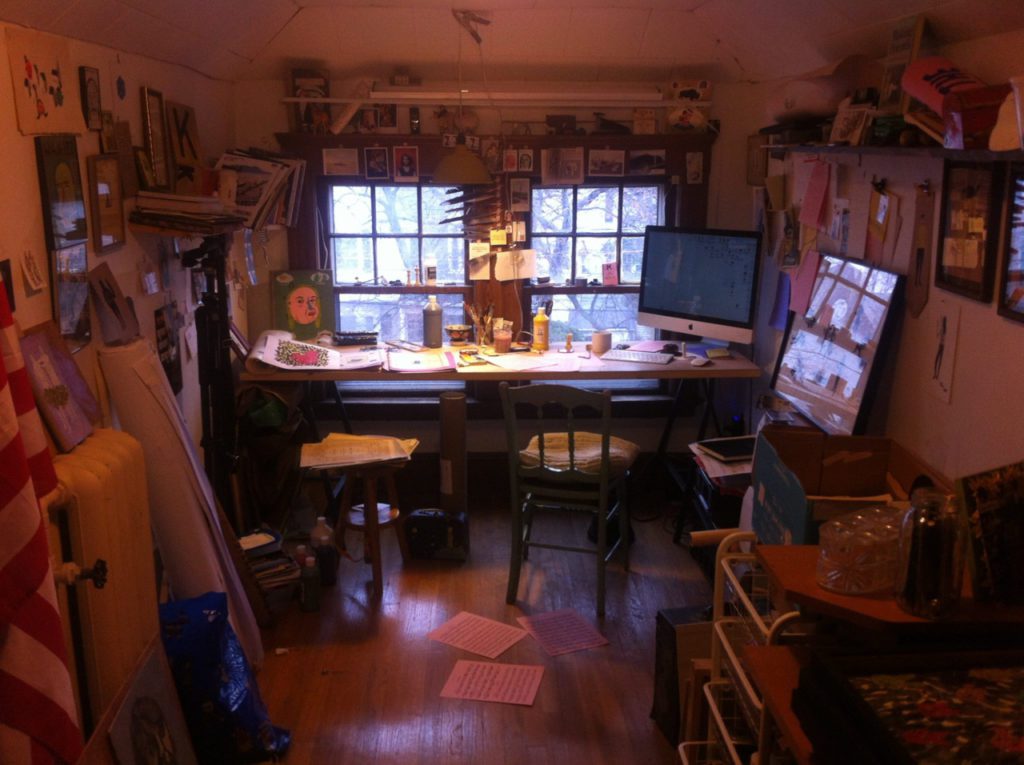 Artist Caitlin Duennebier talks about the inspiration for her solo exhibition at Thomas Young Gallery in Boston.

Caitlin Duennebier: It Was Pretty Violent from MRNVR on Vimeo.

A new live-streaming video variety show employing the arts and improvisation to envision and enact a just future.