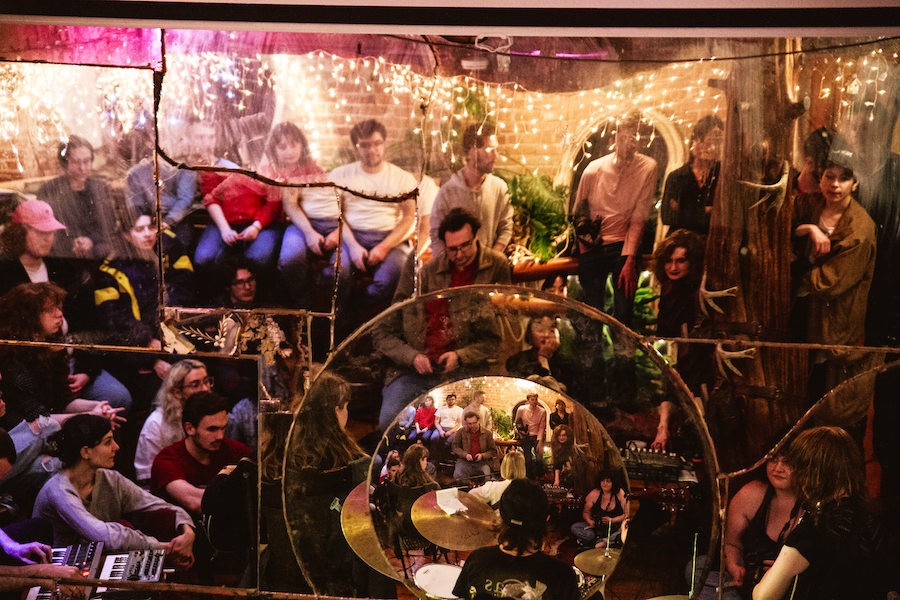 A soft guitar lick played throughout, a voice that blends in and out, and a soft wailing of background vocals mark “Castle,” the opening track of Softest Destroyer, Carol’s debut EP. It’s a striking sound, a sound like bones picked clean and left on the forest floor. From these bones new life springs, the song swells briefly, before it is once again stripped down. It is this sound that makes the record so appealing, Carol’s haunting, beautiful vocal harmonies weave over each other, float over the instruments and ultimately create a sense of ambience and harrowed peace.

At its heart, Softest Destroyer is a work of vulnerability and reflection; the music seems to sit down by the lake and watch the water. The production is lush, spilling out like the sun through a window. The 15 minute EP is marked by the ebb and flow of the masterful production of Ruben Radlauer. In “If Ever” sudden swells of percussion and harmonies fill the room, guided by Carol, before falling away, leaving her voice alone, a sonic space suddenly empty. “Clock” begins the build again, a song of mourning, the look of the songwriter is now turned outward.

“You are the softest destroyer” Carol sings, focusing her attention on those who use their lack of self value as power over others. “Blood and Breastmilk” features spoken word poetry, a reflection of her times of vulnerability, read over the harmonies we have come to expect. As we listen the song envelops the poem, until only the music remains.

The EP ends with “Lives There Too” a reflection on the self and womanhood. “If I’m a woman/ Will I ever stay the same/ If there’s a child who lives in the best parts of you/ There’ll be a woman who lives there too.” Carol sings, bringing the wonder and curiosity of childhood into adulthood. She asks us to merge the wonder we once had with the experiences we are having now, to chip away our wearied and worn selves, experience wonder again. Softest Destroyer, with all it’s stunning lyricism and incredible musicianship, leaves us with Carol; her thoughts, her love, her fear. It is strikingly self-reflective, and, through our listening, begs us to do the same.

I was recently able to catch up with Carol and ask her a few questions before her May 4th performance with Boston Hassle at Dreamscape 18.

Boston Hassle: What music has you really excited right now?

Carol: Right now I’m really into music that’s making me laugh. I mean music, like anything, you know, can make you cry, it can make you laugh. I’ve been listening to Palm a lot, and I just love it. Not that it’s… All those guitar lines are just so funny. I was listening to Drinks on the way here, and Stereolab. I always go back to Kate Bush, I’m always listening to her and the Cocteau Twins. I think as the season gets happier I’m more into music that’s kind of funny, where they do things that are like “I wonder why they do that, I’m really glad they do that!”

BH: What are your thoughts on community spaces?

Carol: I think they’re super important, I think it’s how you start really. It’s very needed in Boston, and I mean I haven’t been to many other cities DIY scenes but I feel Boston has a very special way of including and creating safe spaces, and I hope I can always contribute to that. I think community spaces are so important! For visual arts as well as music.

BH: How did you build your songs in Softest Destroyer?

Carol: I guess how it started was me recording in my apartment and sending what I thought were gonna be demos to my friend to mix, you know vocal parts layered onto guitar parts. The only thing we added was drums. I sent stuff to Reuben, the guy who produced it. We recorded all the drums in two weeks in the winter, we did them last which is not what you usually do, but I didn’t even know if I wanted drums, or how it was gonna play out. I really didn’t want to use MIDI. I’m hoping I can plan that aspect a lot more in the future.

BH: What’s next for you in your artistic life?

Carol: I definitely want production that’s a lot more involved than what was on this last record. I think it’s a learning process, I mean I thought a lot of this was just gonna be put on soundcloud, that I’d just record it acoustically and upload it. But that didn’t become the case, there was a bit more work put into it. I just want to work hard on the production, it feels really important and really powerful. Hopefully I can have another story that’s effective. I’ve just been making demos and having new things, I’m always glad to have new realizations.

Carol: For me it’s much easier for me to be involved in other arts, like poetry and drawing, for myself, like those very personal and therapeutic visual and written arts. But I’ve realized that, and I might be biased, but music is the most emotionally effective. You can really reach people the fastest and the most effectively with sound, just because it’s such a primal thing. We respond to sound faster than we do to visuals or to things we read. I wanted whatever I was saying to hit in a very primal fast way, so I think that’s where I transferred all of that stuff into music.

BH: The poetry you write, would you say it’s more for yourself?

Carol: Yeah for sure, a lot of it is just journal entries, tweaked a little bit sometimes, but mostly it’s just whatever I come out with. I haven’t studied written arts, I don’t really know any structure or anything about that, but in some ways I think you don’t really have to know– I mean it’s good to know sometimes. It can make it a little more effective.

BH: Have you done other spoken word poetry?

Carol: No, I haven’t really practiced spoken word poetry or performance up until this summer, when I got asked to do a house show the same day, and I thought “I’m gonna take advantage of this quiet setting and I’m gonna read to them.” Because I feel words can make a difference, and it worked.

BH: Softest Destroyer feels very personal. I was wondering what you were hoping to achieve with the EP, for yourself or for others.

Carol: Last May I started writing “Castle” which was quite personal and quite direct. And I think it kind of changed out of that experience, the experience of being so vulnerable and caring so much about one person and trying to explain their deservance. It translated into my own growing and trying to learn my own deservance, and that also translated into experiences I was having on the street, like everyday things that were happening to me. And I think because I was very very vulnerable for many many months, because I had a very open wound, it was reflecting in various areas of my life. I wrote “Clock” in one night. Every other song it took me a long time to write because I thought about it a lot more, I came to terms with things and made sure I was being honest in everything I was saying. If I had thought about “Clock” more I wouldn’t have put it on the EP, but really when I think about it, me calling someone else the Softest Destroyer is just a huge reflection of me, me calling myself that. It’s very ironic but it’s real. 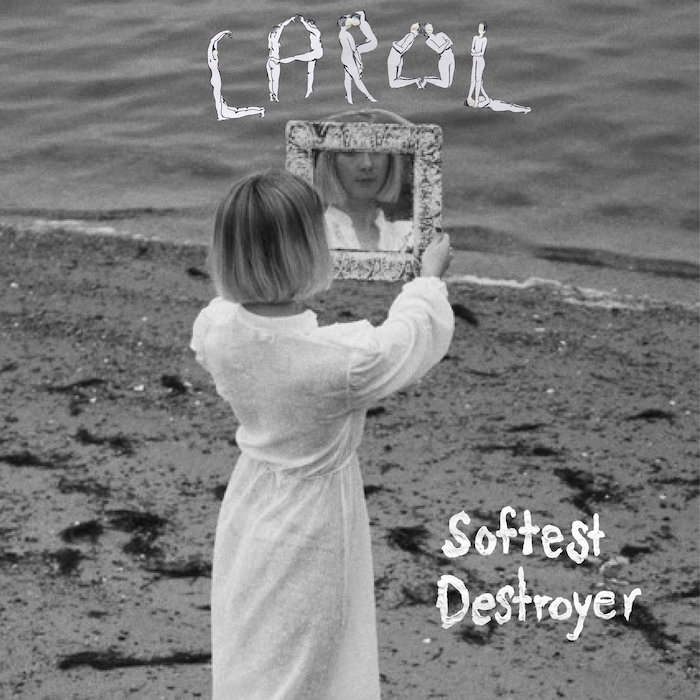 Carol: I think it feels good! There was definitely a time when I was younger it would have been a lot harder for me to release something so vulnerable because it takes some level of maturity to admit that you’re complex and that you’re wrong a lot, sometimes you’re right, but it’s not always clearly one way or the other. But I think it’s good, My communication has gotten a lot stronger, not only in my music but in my life as I grow. And that’s important and cool and helpful for me. Hopefully it can be like a book for others to see that having constant communication with yourself is helpful.

BH: Something you’ve said before is that the darkness in your music can be powerful and touching to others, how does that factor into your work?

Carol: I think it’s definitely a privilege to feature darkness in my music or in my life in that way. It’s interesting because I think in my life I’m usually happy and excited and, like I said, I listen to a lot of music that I think is funny. But I think you can’t have one without the other. So having that extreme dark in my music let’s me leave the rest behind. A lot of it comes from what I’m comfortable singing. I write for my voice, I stick whatever kind of chords I can play that sound best with it, so a lot of my sound comes from that. But It’s definitely a privilege to be involved in an art that is dark, and it’s important to make sure it’s controlled and articulated correctly. I’m grateful I can dip into that and still have a lot of really great aspects in my life.

BH: You’ve also mentioned that you wrote this EP in a period of isolation, what does that mean for you?

Carol: I mean I guess I wrote everything alone, but also I was closing a lot of doors socially at the time, and I think that was a source of inspiration for a lot of it. A moment to turn to words. Last summer I was here just studying, working a lot, and then I’d just take time to write.. I was definitely having interactions and whatever, but it was a big moment of like, I had been going for a very long time and then I stopped. And I was like, okay I have to get this under control a little bit.

BH: Softest Destroyer is a lot about relationships, both within yourself and with other people. How does the isolation factor into that?

Carol: I think a lot of it was more about the wound. It was obviously very hard to be alone, but if you aren’t taking care of yourself you can’t take care of others, and if you aren’t giving to yourself you can’t give to others. It was one of those things where I had to learn to be giving to myself, I had to force myself to put me first. The isolation is mostly a tool to actually think about things. That’s the part that is, to some degree, the healing. But it is interesting because a lot of it is very interactive in a lot of ways. It’s all a balance, and it’s so hard to balance too.

BH: You have a show coming up with Boston Hassle.

Carol: Yeah I’m excited! It’s going to be at Hope Central Church with Dreamscape, it’s gonna have visuals with it all. I’m very honored to get to play in a space like that, I think it’ll be really interesting and fun. I’ve been talking about wanting to play in a church for a very long time and the opportunity arose and I’m very excited about that. 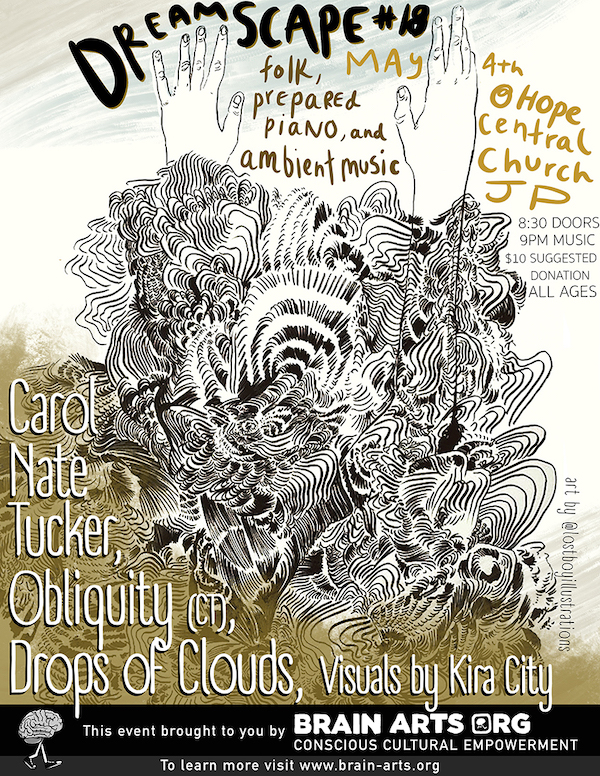