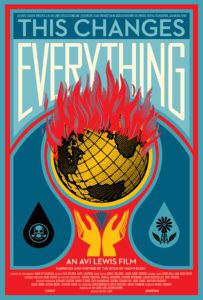 Capitalism as an economic system has been under increasing scrutiny for the past decade due to continuing economic instability and the lack of upward mobility of the middle class – however, most people do not immediately equate capitalism with climate change, although there is a tangible link between the two.

The debate over the methodology behind climate change studies has somewhat overshadowed a foundational truth: the changes in the environment are often directly related to capitalistic activities such as the overconsumption of resources and reliance on fossil fuels to power manufacturing processes. The burning of fossil fuels have been shown to be responsible for as much as 85 percent of global warming, and according to Alberta Energy the manufacturing sector alone is responsible for more than 20 percent of all carbon dioxide emissions. In a fundamental sense, capitalism is altering the planet’s climate and may ultimately result in an uninhabitable world.

Journalist Naomi Klein, along with director and husband Avi Lewis, take on this issue in their new movie, This Changes Everything – a documentary that explores the relationship between capitalistic economies and global climate change.

Klein published her best-selling book, This Changes Everything: Capitalism vs. Climate in 2014 to critical acclaim. Rob Nixon, in the New York Times Book Review, stated emphatically that the book was “the most momentous and contentious environmental book since Silent Spring.” Now, Klein has taken her thesis to the screen with help from Lewis, a Canadian filmmaker and former host of Canadian Broadcasting and Al Jazeera network shows, to spread the important message: capitalism has placed mankind in a precarious position that will not resolve itself without targeted action.

With scenes ranging from the tar sands of Alberta to Montana’s oil fields and locations around the world, the film documents the struggle of “the little person” to change the course of events caused by exploitation on the part of big oil companies. With supporting executive producers including Seth MacFarlane, Alfonso Cuaron and Danny Glover, the documentary reaches a broad audience. The film moves through a variety of scenes of true horror, including deforestation in Canada, smog in China and oil spills in Montana to show the true face of what is happening as a result of capitalistic desire for profit. 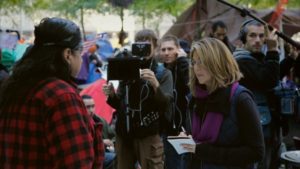 One of the strongest features of the film is its use of “regular people” as interview subjects. During the course of the 90-minute film viewers meet a number of individuals, personally affected by such actions. Crystal, a young Native American in Canada, fights for access to restricted areas in a military base to determine the true environmental impact of its activities. Mike and Alexis own a Montana goat ranch that has been destroyed by a broken pipeline. Melachrini from Northern Greece is directly affected by the economic crisis, which is being exploited by companies to promote mining and drilling projects that could ultimately threaten the environmental integrity of the country; and Jyothi from Andhra Pradesh, India, has a lovely singing voice as well as a tiger-like dedication to the battle against a coal-fired power plant that has the potential to destroy an area wetland.

While the film has some inherent weaknesses, overall it is a stirring call to action for those who are concerned about climate change. The striking images and heart-rending personal interviews should infuse anyone watching the movie with anger and determination to stop the abuse of the environment in the name of profit.
Klein’s underlying message is simple enough: only at the grassroots do people have the power to truly change government activities. Even President Obama, who is generally considered to be environmentally conscious, is chastised for working with capitalistic interests to the detriment of the economy. The film’s statement is clear that no matter the political party or group to which government officials belong, they are often swayed by complicated economic concerns – only people at the most fundamental levels of society can participate meaningfully in the “new environmentalism of the poor.”