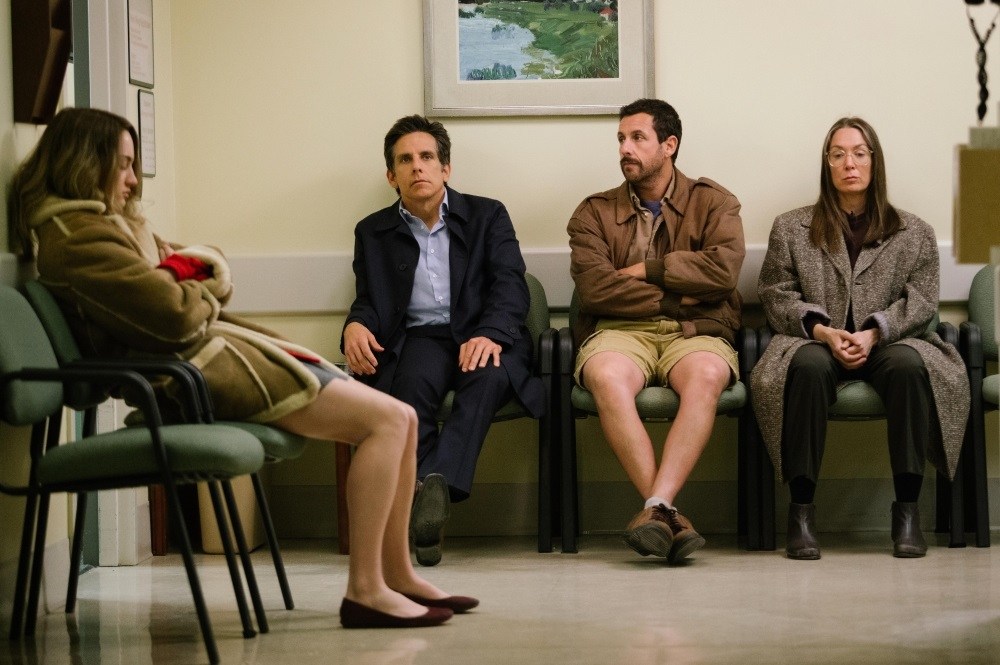 There are few directors so brilliantly obsessed with the minutiae of growing up as Noah Baumbach. Between his representations of post-graduate life in Kicking & Screaming (1995) to the hopeless wandering of a mid-twenties urbanite in Frances Ha (2014), his work has used quick bouts of dialogue to create engaging albeit idiosyncratic characters with whom we desperately relate.

His most recent work, The Meyerowitz Stories (New and Selected), is no exception, in this case having shifted the focus from young artistic spirits to the more fatigued souls of actors like Adam Sandler, Ben Stiller, and Dustin Hoffman. This is an idea that was tinkered with in While We’re Young (2015) – the experience of an older soul combatting a more rambunctious spirit – though the Meyerowitz family focuses far more on the former to express a positive message about the nature of getting older.

As a fan of Baumbach’s work, I can only assume this has somewhat to do with his personal experience, as each piece of his prior work has grappled with some new life experience related to the energy of finding love or the nature of an aging artist. Having a film solely focused on the woes of older characters is therefore resonant to a director who is aging but seeks to maintain a visage of creative energy.

This is what makes The Meyerowitz Stories so convincing. 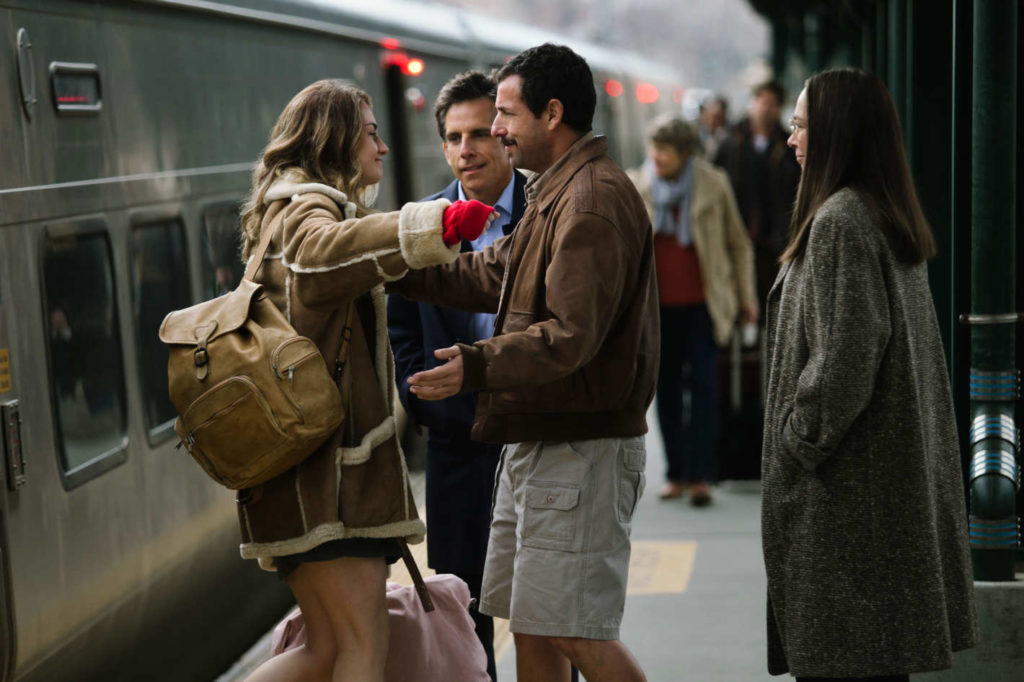 Starting with the everyman-type of Adam Sandler, Baumbach pulls no punches in selling us on the comedic actor’s dramatic potential. We are instantly reminded of Sandler’s range in a performance akin to his work in Punch Drunk Love (2002) as we explore his character’s emotional repression mixed with an ability to fly off the handle at any moment. There are particular moments which tap the gas on Sandler’s anger for both comedic effect and character development – a marriage that makes his purpose in this film all the more important.

Both Stiller and Hoffman capture a similar essence of aggravated normalcy in their contributions with the former drawing a neurotic personality from his performance in Greenberg (2010). Stiller brings emotional weight to his scenes, relying less on his capacity as a comedic actor than he is playing into the role of a straight man. If anything, the most comedic characters of the film are awarded to Hoffman, Emma Thompson, and Grace Van Patten, all of whom play figures that feel more absurdist than the Meyerowitz siblings (which include Sandler, Stiller, and Elizabeth Marvel).

Performances in mind, there is something markedly different about the way Baumbach composed his characters for Meyerowitz. He is typically fond of creating characters frustrated with their artistic energy, people who have trouble finding their niche. This was the rare story in which we saw characters who are hurt by their art, figures that have trouble finding a happy balance between emotional and personal satisfaction when faced with the daunting task of bringing ideas to life.

It’s a general theme that carries throughout the scattered narrative. 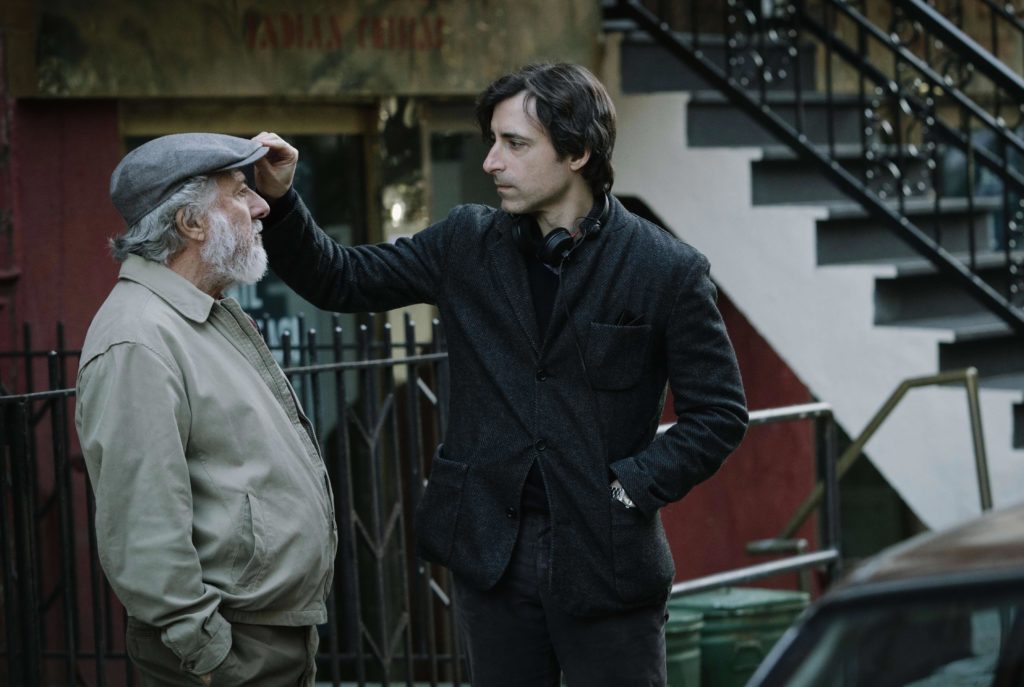 All in all, this is a film about parents. It’s a story about how Hoffman, the patriarch of the Meyerowitz family, has impacted his children with a dedication to the craft of sculpting throughout their entire childhood. In that sense, it follows the effect art might have on unifying or dividing an average family.

The word ‘average’ is applicable because, interestingly, Hoffman’s father character is not a successful figure. His art is respected in the world of the film but, rather than making him a superstar, Baumbach sets another artist (played by Judd Hirsch) in this world to show how the Meyerowitz name pales in comparison. He is not invincible, nor is he rewarded. He is human.

As an artist, however, Hoffman seeks to transcend his human label and, in doing so, has scarred his children. Sandler brings the most art to screen through his love of playing piano. He is the bard of the family, having used his emotions to write songs familiar to Hoffman and Stiller and using his craft to write material that brings him and his on-screen daughter (played by Van Patten) closer to one another.

There is a particularly poignant moment early in the film in which Sandler shares his singing chops and emotionally reminds us of his musical talents. Damn you, Sandler.

The daughter character is instrumental in driving home the value art brings to a family. Coming to the table as a filmmaker, she presents her work to the characters via e-mail, introducing us to the hilarious tales of her character, Pagina Man (a character possessing both a penis and vagina), and reminding us that sometimes our relatives make some pretty weird yet entertaining shit.

By the end, it becomes clear that creating art does not instantly stratify a family. Instead, this film reminds us that, in making art, we must remember to live our lives. 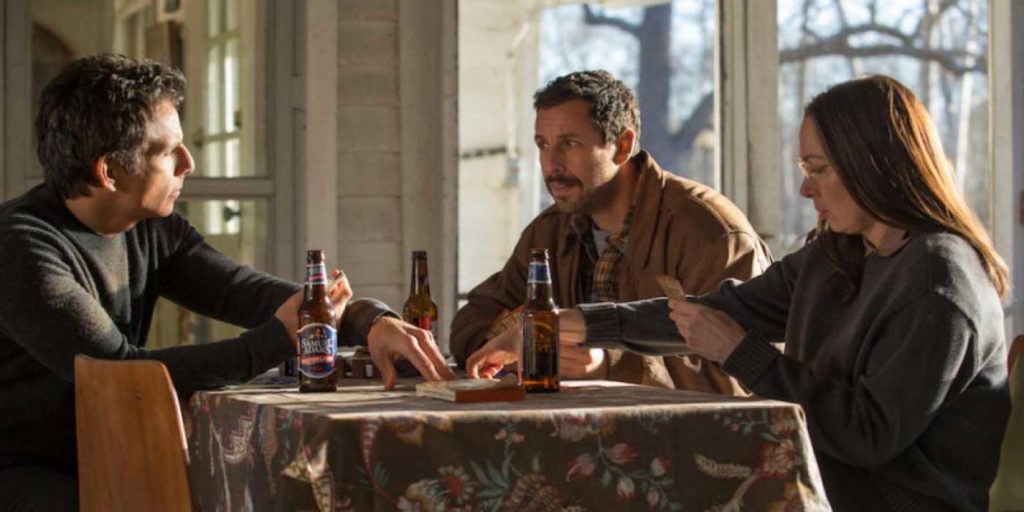 The message is sweet, and continues to remind us of how instrumental our parents are in our upbringing. There are two ways to view an awful childhood as it splits between the feeling of an overwhelming weight hanging over you all the time, as well as the feeling of being proud to step out of your bounds and to use the positive parts of the people who made you to then become an even better person.

None of this is explicitly stated, however, as the Meyerowitz children realize – there is no true way to remove your parents from your life, regardless of whether they are dead or living. We are all informed by those early years and, as such, must choose how we use them.

All of this being said, The Meyerowitz Stories is a heady picture that perfectly complements Baumbach’s earlier work but, as a standalone, works hard to make a lasting impression. It is by no means the strongest of his pieces and, though it draws once again from French New Wave, has little chance of moving forward in the Competition.

I could be wrong but, having heard the reactions to Netflix (this was yet another screening which started with booing), there is too much stacked against the film in terms of its content and its context.

I recommend checking out The Meyerowitz Stories for the sake of enjoying its brand of older-family humor and, again, being captivated by the pathos of Sandler’s performance.

In short: It’s a watch but it is by no means a must watch.

Also: Dustin Hoffman wears a polo shirt with a tie and it is one of the most confusing wardrobes I’ve seen in my entire adult life.