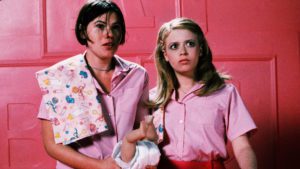 It’s hard to put to words the cultural behemoth that is But I’m a Cheerleader. I first watched this movie when I was in high school, sure of my queerness but not quite sure what love could look like. Of all the queer films I binged during that era, Jamie Babbit’s tale of a high-school cheerleader sent to conversion therapy camp left one of the firmest impressions. Natasha Lyonne’s Megan Bloomfield is enduringly peppy, charmingly naive, and essentially, an all-American girl. She just happens to be a lesbian.

Released in an era rife with bleak depictions of LGBTQ relationships, But I’m a Cheerleader is a lighthearted film that never ignores the challenges of going against heterosexuality. Clued in by her interests in vegetarianism and lesbian singer-songwriter Melissa Etheridge, Megan’s friends and family stage an intervention. Despite her denial, Megan winds up at True Directions, where she and her fellow campers go through a five-step program to convert to heterosexuality.

Whenever “camp” comes up in conversation, I can’t resist bringing up this movie. The vivid color palette, fabulous casting choices (see RuPaul as an “ex-gay” camp counselor who clearly hasn’t lost his appreciation for men), and general mocking tone towards straight culture all make it a clear example of camp cinema. At True Directions, the campers are made to wear either pink or blue outfits and engage in stereotypical gendered activities. The ironic result is that campers spend plenty of time in close proximity with their preferred genders. Characters make countless innuendos (some intentional, mostly not), such as counselor Mike working on a car and asking male campers, “Who wants to go down with me?” Nearly every hand goes up. As of 2019, nearly 700,000 LGBTQ adult in the US are estimated to have received conversion therapy. More recent films, like The Miseducation of Cameron Post, have taken on the abject cruelty of this experience through a dramatic lens. But I’m a Cheerleader doesn’t aim to make you cry. In fact, Jamie Babbit’s intention seems to be pretty simple—humor and appreciation for queer love. Although inspired by John Waters, But I’m a Cheerleader has a strong romantic sensibility. Megan and Graham’s love story is both heartwarming and sexy. Not too sexy, though—Babbit had to make a few edits to get the movie’s rating down from NC-17 to R (a pretty clear case of anti-gay bias if you ask me).

At its core, But I’m a Cheerleader is a silly, saccharine take-down of conversion therapy. We see that straightness cannot be forced, and personality and looks have nothing to do with sexuality. When family and friends fail to understand, Babbit reminds us there’s always another family, a chosen family, who will encourage us to be our whole selves.