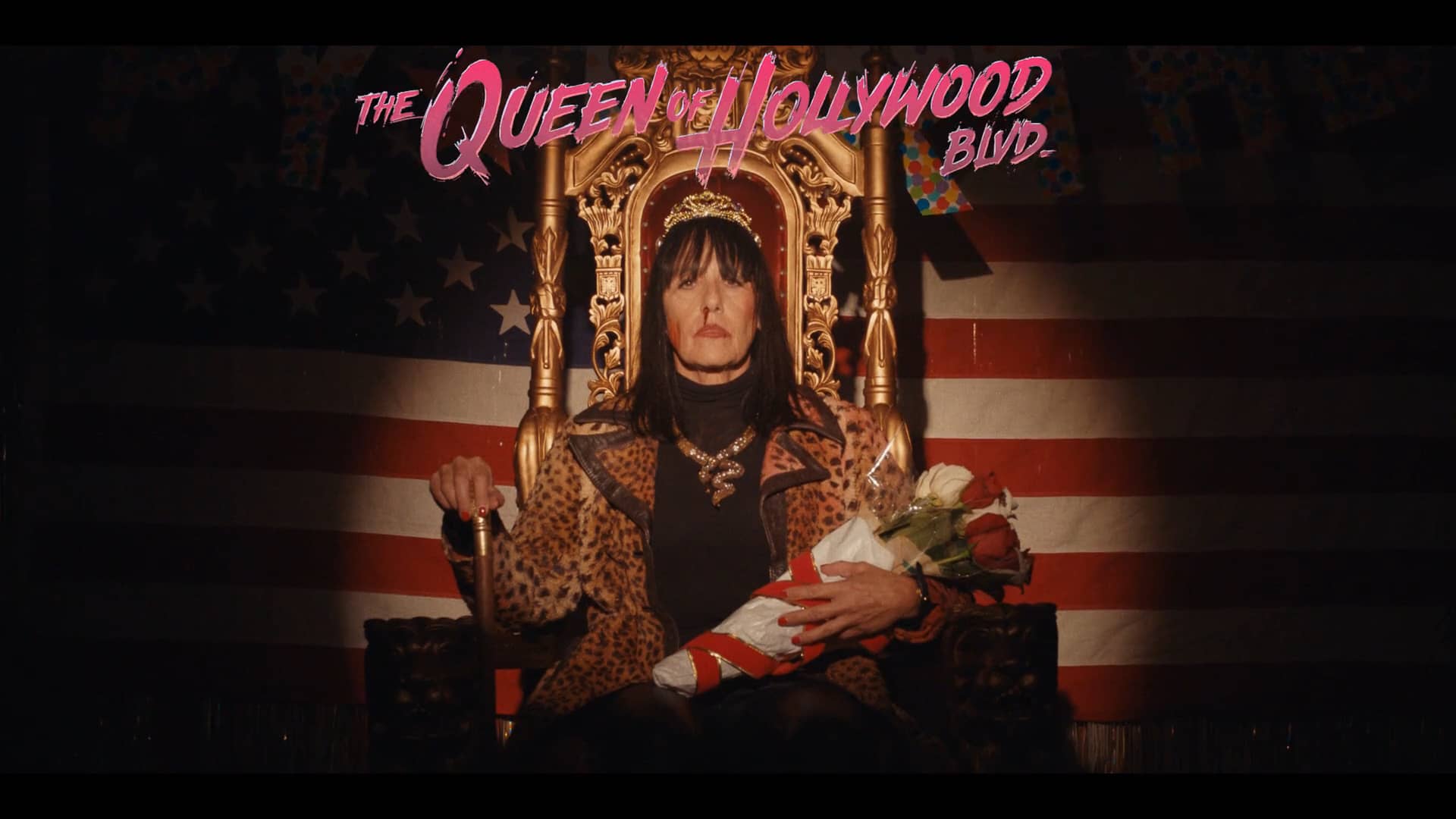 The Queen of Hollywood Blvd is less a movie, and more of a bloodied, battered love letter to gangsters, crime, and what’s underneath Hollywood’s glamorous sheen. Writer-director Orson Oblowitz crafts something that delves into the abstract in order to express a mood, a feeling. With echoes of Citizen Kane, the movie has an intense focus on the final downfall of a staggering figure, trading in the biopic format for home movies and monologues, in order to give us glimpses into a character’s past.

Queen Mary is a strip club owner who receives a visit from an unpredictable figure from her past, a gangster by the name of Duke, who’s come to collect his due. In this case, the strip club that Queenie has fought for and defended, all in the name of an American dream. It’s a bit of a twist on the Faustian bargain–not unlike Citizen Kane–in which the devil, Duke, returns to take what is his. In the old tale, Faust exchanges his soul for success, wealth, and prosperity. Here, the soul and the gains are both tied up in the shape of the strip club. It was originally Queenie’s gift, but has now become a sacred space all her own; a soul-like object, indeed.

This idea of the Faustian bargain, of devils and souls, echoes throughout in the form of religious iconography. Crucifixes and crosses litter the movie, inconsequential objects affixed neatly next to neon, leopard print, and cigar smoke. The movie’s design showcases a grimy part of Hollywood either slowly being snuffed out or pushed further down, beneath the glitz and glamour of a marketable, gentrified sheen. In some ways, it reminds me of Sean Baker’s Tangerine. Both are odysseys featuring characters unlike those traditionally presented in Hollywood tales. Whereas Baker’s was deeply humanist, Oblowitz wishes to showcase something grungier, although no less empathetic to it’s central figure.

Queen Mary, played by the deeply effective Rosemary Hochschild (Oblowitz’s mother), vacillates from sympathetic to dangerous in the blink of an eye.  The movie is very much a showcase of Hochschild’s talents. She is the movie’s linchpin, cleverly written as femme fatale, hardboiled detective, and dangerous gangster all in one. Walking with a cane, Queen Mary is unassuming, both to the characters in the movie and to an audience unprepared to see a 60-year-old woman play this type of role. We assume our strip club owners in debt to criminals and embarking on violent journeys to reclaim what is theirs to be men, both masculine and stoic. Instead, Queenie is a leopard-print-wearing mother, devoted to her son and to her business. Her ruthlessness is camouflaged in her visage and by her use of a cane. Hochschild captures all of these aspects of Queenie in spades. She is an unpredictable, incendiary actress, who is brilliant at portraying moods both small and large.

The movie itself can be a little uneven, driven more by a stylistic commitment to its representation of a seedy Hollywood underbelly than by a cohesive sense of visual storytelling. Jarring cuts occasionally occurring during dialogue between actors tend to create a confused visual pace, taking the viewer, or at least myself, out of the movie. Likewise, the somewhat small movie contains a sprawling cast of characters. Constantly being introduced to new people detracts from the movie’s finer, more considered center.

And yet, I can’t help but think that this mild incoherence is part and parcel with Oblowitz’s overall thematic goals. He blends grindhouse with noir, with melodrama, and even with arthouse to relay atmosphere to the audience. His occasional stumbles do sort of snap you back up, back into the world being created, commenting on the American dream and the spaces in America in which women are allowed to attain it, as well as how they are allowed to attain it.

Queenie knows all about the American dream, knowing that, like the soul, these dreams prove ephemeral, illusory, requiring actions and sacrifices unknown. Each action is, of course, simply a step towards death, toward the devil taking his due. Yet, in the moments in between, perhaps while raising a son, while kissing a lover, or while protecting a child, the cost of living proves worthwhile.