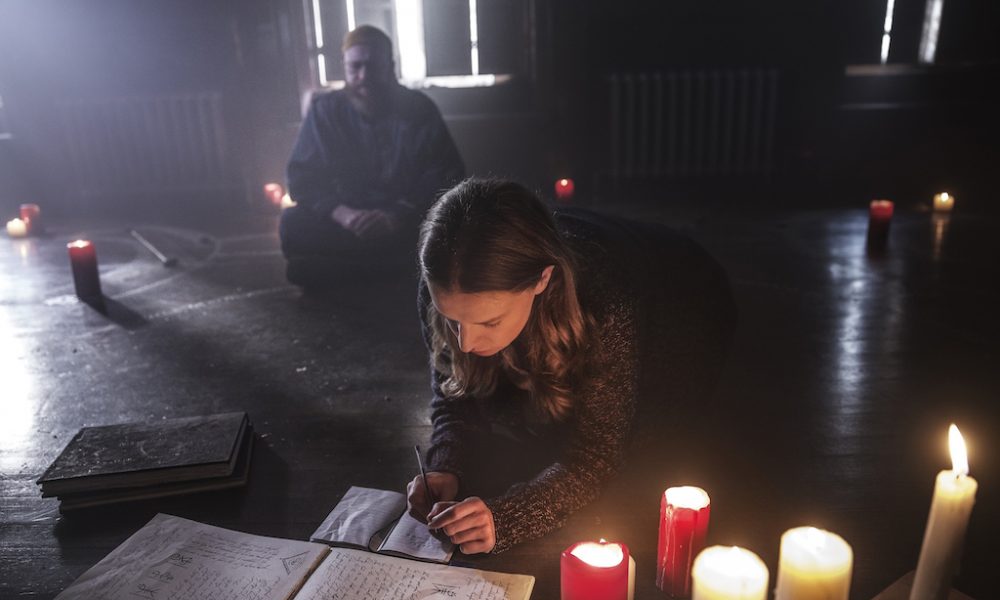 Roll up your sleeves everybody! It’s time to get to work. I don’t want to hear any bitching, and I sure as hell don’t want to see any lollygagging–you asked for this, remember? Either you’re serious about breaching the veil between worlds and invoking the spirit of your dead son or we may as well all go home right now, ok?

The above entirely fabricated rant pretty neatly encapsulates the attitude adopted in A Dark Song–Liam Gavin’s auspiciously creepy yet oddly edifying feature-length debut, which screens tonight as part of the Boston Underground Film Festival–by Joseph (Steve Oram), a medium, mystic, and all-purpose adept of the dark arts, towards Sophia (Catherine Walker), a seriously bereft mother who has hired him in the hope of communicating with her recently murdered child, no matter the cost to her–whether in money, well-being, or sanity.

A Dark Song is both a sort of pseudo-operating manual intended to guide the viewer, step-by-painstaking-step, through the performance of a magickal ritual intended to invoke the dead–an occult procedural, if you will–and a supernatural horror take on the tough-love apprenticeship dynamic found in movies like Whiplash (2014), or The Karate Kid (1984), or, I don’t know, An Officer and a Gentleman (1982). A strange combination, sure, but one that works, largely because the film, thanks to strong performances and a rigorously executed plan of action, earns the seriousness with which it takes itself.

It takes Sophia a little while to convince Joseph to sign up, but once she reveals her reasons (if that’s what they are)–and, not incidentally, offers him 80,000 pounds–he takes the job, whereupon the differently damaged pair hole themselves up–“In a house, in the country, in Wales”–and kiss the outside world goodbye. Once Joseph seals the perimeter just outside the house with holy salt (I’m guessing; could be boric acid, cane sugar, cocaine), the contest of wills begins in earnest. Joseph estimates a six month stay, but he can’t say for sure. Breaking through to the other side doesn’t always happen on schedule.

And sure enough, it doesn’t happen that way here either. After Sophia subjects herself to Joseph’s entire regimen of privation, incantation, quasi-waterboarding, and, um, “ritualistic sex” (of a sort), and nothing happens–well, she’s pretty pissed, but she finally agrees, faced with what other options, to do it all over again from the beginning. It’s very much to the filmmaker’s credit that its extended, increasingly doubtful build-up to the cathartic/demonic pay dirt doesn’t sacrifice tension in the least. If anything, it enhances it, because, for all of the probably dubious but impressively authentic-seeming attention to ceremonial detail brought to bear by director Gavin, his primary concern never wavers from his two characters, whose fragilities and failings are exposed, tested, and even provided with some succour in the hothouse of the process they’ve embarked upon together… and trapped themselves within.

Much of the film’s unease, if not outright horror, derives from the expertly sustained, sometimes sickening sense of dread conjured by Ray Harman’s electroacoustic soundtrack, which recurringly clambers into and pulses growlingly out of exactly the kind of subterranean bass-chamber you might expect to find in a well-appointed underworld opium den. The score’s ominous rumblings reverberate in the rocky relationship between Sophia and Joseph, which at a couple of points looks about ready to tumble into Misery (1990) territory, with Sophia becoming a captive, embattled James Caan to Joseph’s bloody-minded Kathy Bates. Hell and heaven, warts and all, are both other people in this strange song. And they both repay our patience in finding them, and singing them.