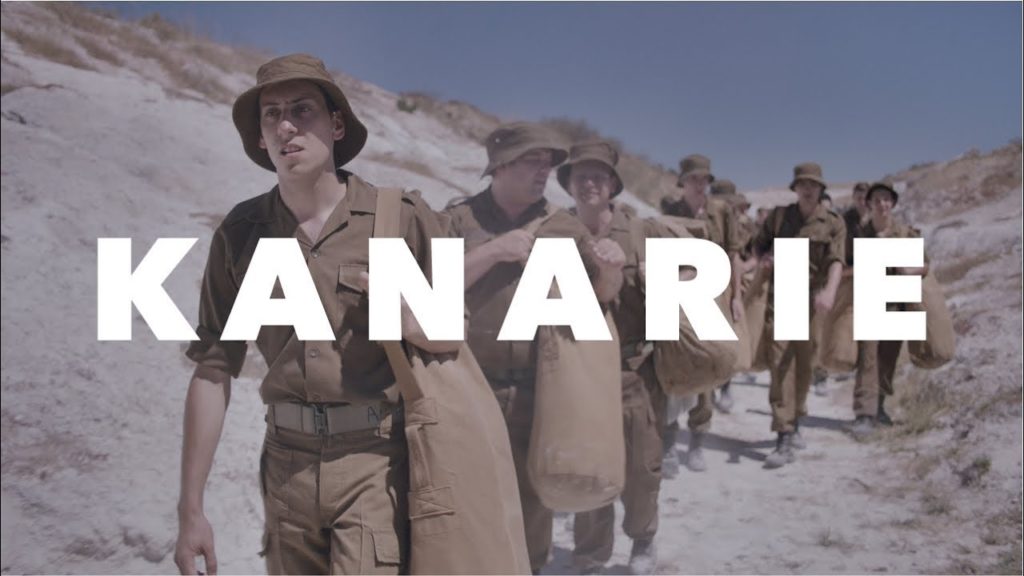 Every day is like survival, according to Culture Club, and this couldn’t be more true for closeted queer kids, particularly those in environments that consider them unholy or abominations. Yet survival, surviving, is rarely explored through the lens of queerness, as in the ways that little boys who like ballet, sewing, or Boy George steel themselves from the world or excise parts of themselves to be “normal.” In Canary, directed by Christiaan Olwagen, we are given a glimpse into the world of these queer boys as they become queer young men, contending with the external world as much as they must contend with their internal one, shaped by the survival tactics they’ve knowingly or unknowingly developed.

Canary is a subdued movie, as written by Olwagen and Charl-Johan Lingenfelder, and is made more powerful because of its muted exterior. It is about quiet, reserved (white) Johan Niemand, conscripted to serve a two-year military training during the last decade of South African apartheid. In order to avoid the frontlines of war, Johan applies for, and is chosen to join, the South African Defence Force Choir and Concert group: the “Canaries.” In the Canaries, Johan, as delicately played by Schalk Bezuidenhout, meets new friends Ludolf Otterman (Germandt Geldenhuys) and Wolfgang Müller (Hannes Otto). His new home with the choir, and with the military, becomes something of a double-edged sword: the closer he becomes to his unit and friends, and the more he feels comfortable with himself, the greater his internal pressure and confusion grows. When Johan and Wolfgang begin an intimate, romantic relationship, Johan must choose to close himself off forever or face his greatest foe: himself.

Johan’s compatriots Ludolf and Wolfgang are queer as well. While the former (although never explicitly detailed as queer, certainly queer-coded) walks through life confidently flamboyant and the latter simply laughs in the face of ridicule, Johan builds up barriers between himself and other people and silos his emotional interior. If he can’t connect, he can’t get hurt; if he can’t feel, he can’t suffer. Shielding himself from the outside world, Johan finds comfort in Boy George, Kate Bush, Grace Jones, and the gender-fluid music and fashion of the mid-’80s. In fantastical musical interludes, Johan imagines himself as Boy George, free to wear makeup and dresses and be a beacon to young boys struggling to survive in a world that wants them to be anyone but themselves. Johan found music—particularly the world-blocking environment of his headphones—as an early way to shield himself from taunts and abuse from his peers. And with the Canaries, music proves a further tool to shield himself from war, but it also becomes the very thing that connects him to his unit and especially to Wolfgang. 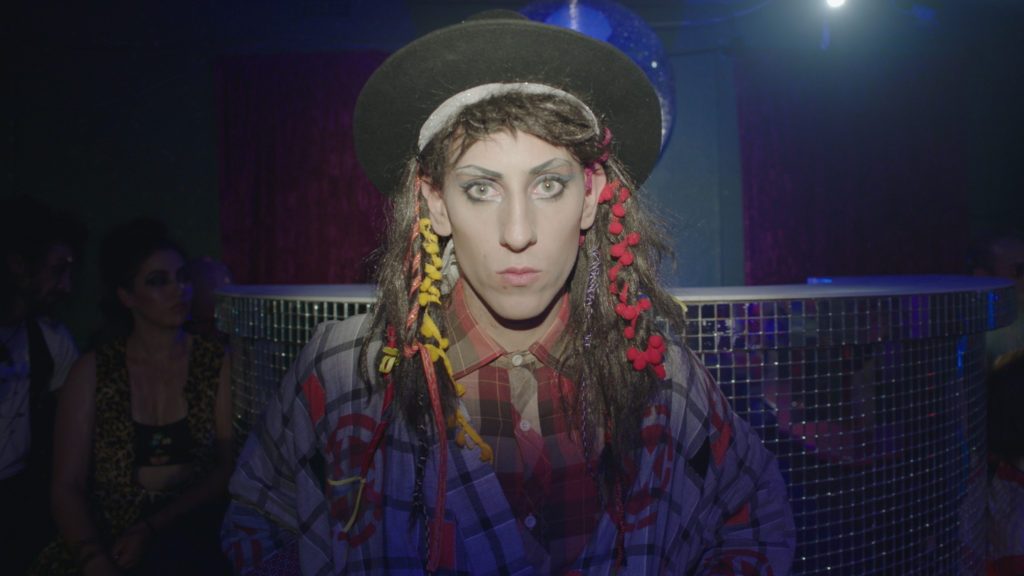 But the comforts that Johan found himself at home in start to become perverted and even horrific, as his self-hatred and stoicism runs deeper in the face of real, uncontrollable feeling. Whether Boy George’s music or Wolgang’s touch, the power of internalized homophobia knows no limits to what it can poison. Johan himself becomes hard and cruel, and his poisoning of the well—his own internalized self-hatred—grows until its only outlet is hurting his friends and himself. It is another double-edged sword: the closer he moves to the frontlines of his internal struggle, the more he externalizes the hurt that he must confront to find resolution. Bezuidenhout is particularly mesmerizing in his ability to simultaneously shut himself off to the audience, while also expressing Johan’s deeply repressed flashes of emotion: sorrow, rage, brutality, love. The use of music (thanks to Charl-Johan Lingenfelder) is likewise expert in the movie, especially as it highlights the coordination between this distinct facet of the closet and Johan’s own journey. Culture Club’s “Do You Really Want to Hurt Me” is a motif that transforms alongside Johan, moving from empowering to romantic until it too becomes something grotesque, unwieldy.

Surprisingly, I was reminded not of other “coming-out” stories, but of J.D. Salinger’s The Catcher in the Rye (a book that I never think of), which also follows a teenager occasionally succumbing to the worst parts of himself just as much as he contends with the alienation and casual callousness of the society and people around him. Salinger’s story and Canary both are stylistically rooted in the internal lives of their protagonists, just as much as these stories are concerned with the world that their characters are shaped by. While Holden Caulfield contends with the “phonies,” Johan contends with the legacy of religion and warfare in a country torn apart by white supremacy, by a country doing everything it can to mute and whitewash the horrors of its past and present. At one point, his choir leader, Reverend Engelbrecht (Jacques Bessenger) tells the boys to “remember this anger, so that it won’t turn to nostalgia.” The movie shuns nostalgia throughout, another phony thing meant to appease the masses and solidify the stories and structures that allow hatred to endure. Shots of characters standing as if in a photo litter the movie, the performers posing uncomfortably as the image makes clear that nostalgic snapshots of history can cover up essential truths of the players involved; can preserve powers meant to control and brutalize; and that stories told by those in charge traditionally serve their own personal goals. Even the stories we tell ourselves can be dangerously false.

Canary, with its muted gaze and straightforward lens, says something powerful about how people are uncontrollably shaped by their environment and by the stories they tell themselves, and how inextricably tied together every internal piece of ourselves is. Changing one note can make a harmony become discordant, broken. This message, powerful and rarely seen, is expressed by the Canaries’ choir leader, the oh-so gentle Reverend Engelbrecht (another character queer-coded, if never definitively stated as such). In one scene, Engelbrecht tells the choir to use their lived experiences to give full life to the words that they are saying. In another climactic moment, Johan explains the world’s hatred of the homosexual feelings he has, as codified by Merriam-Webster and the Bible. The Reverend calmly asks Johan, would he be willing to sacrifice everything he has, his talents, his gifts, his accomplishments, for the sake of acceptance? And acceptance by whom? 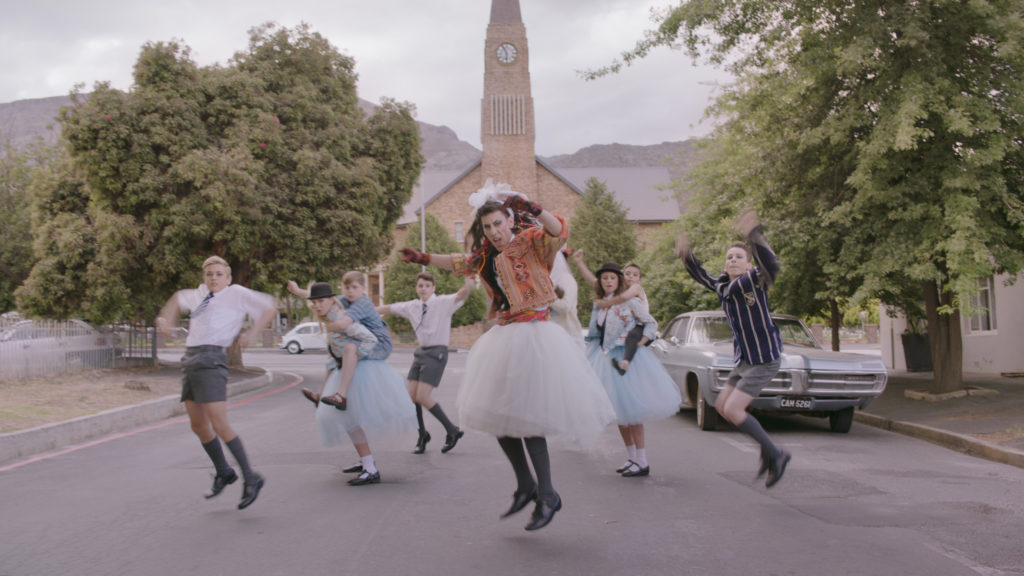 In Canary, in life, identity is not really one definite thing. It is many, artifacts tethered together delicately in a constellation of likes and dislikes, traits and skills, experiences and memories, a network defined by every individual part. It is a unit of soldiers, who succeed and fall together, it is a choir, where one voice out of sync ruins the whole piece, and it is a picture of pieces re-taped together. For queer people, for marginalized people, this is an entirely lived and definite truth, but one that seems rarely understood, let alone “believed” in the mainstream (as evidenced by recent efforts to remove the queerness from biopics about queer people). Yet to neuter something so essential to an individual, to remove any semblance of queerness from a person or a story or even a history, is to tell something incomplete and wildly untrue. It is to view someone or something lazily, nostalgically, which is of course to view them falsely. And this false worldview reflects and reverberates until it becomes codified in something as ordinary as a dictionary, and as ephemeral as the mind of a young boy.

Johan, like all of us, is shaped by the landscape that surrounds him, whether it’s words or places. Wolfgang calls him Farmboy throughout, a lover’s teasing. Yet it also highlights the fact that Johan is entirely where he comes from, how he views that place, and how others view that place. Within him are Boy George, bicycle bells, his family, his friends, his duty to God and country, his desires, his abilities, and, particularly, the words of the people that surround him, for better or worse. It is these parts of Johan that string together the movie itself as well, which, in style and substance, reflects its central character’s internal life so resonantly, so beautifully. And it does so because it seeks to view Johan wholly.

The movie is about Johan “coming out.” Yet Olwagen never positions Johan’s coming-out story as something to be consumed by others. It’s not about family members or friends, just as the stories of the queer-coded people around Johan aren’t for his, nor the audience’s, consumption. Even the good, gentle Reverend knows that coming out—that creating something beautiful, whether a song or a life—is importantly, and ultimately, about the self, about self-acceptance. It is looking at the whole of oneself and seeing the beauty therein, loving all of it unconditionally, from the discordant chords and competing harmonies to the sweetest noise.

And what beautiful music only something told truthfully does make.