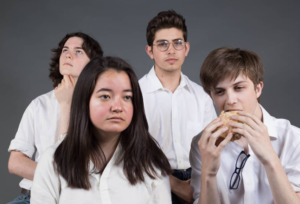 Tomtsu is blasting out of Brookline with funky yet mathy instrumentals and powerfully soothing vocals. They seem to have really gotten popular since their album release back in March scoring over 14,000 monthly listeners on Spotify. They have also built up a name for themselves in Brookline High School and beyond.

I got the privilege to sit down with Zach Fischer (Guitarist) and Max Grossman (Drummer) and ask them a few questions long before they headline for BRAIN CHILD October 5th.

Boston Hassle: How or why did you decide you all wanted to form a band?

Max Grossman: I think that secretly we all like music, big secret about us. There was Me, Zach and Jax at the start because it was just us in the beginning we were just like “hey I like your style and I think we should start a band together.”

Actually I was doing an audio engineering session for their previous band but no one showed up. Then we all played together and Tomtsu was born.

Zach Fischer: Kind of like what Max said. We were all at an audio engineering workshop and Jackson and I were supposed to play with our band and a bunch of kids who wanted to learn audio engineering were supposed to stay at a recording session for us. But our band didn’t show up so we tried to put something together really quick so the kids could still learn. So Max came to play drums and we jammed on command and it felt really cool. It was a connection we never really had with our old band so we were both thinking we should jam with this guy more.

BH: What is your stance on the amount of teen resources for recording and playing music in Brookline?

BH: What musicians are the most inspirational to you and why?

MG: If you ask anyone else in the band they definitely wouldn’t say the people that I would say. I gotta say I’m wearing an Anomaly shirt, Anomaly’s pretty sick. If you’re talking drummers though: Louis Cole and Mark Guiliana are my number one people for musicians, there are others but those two are the ones I’ll listen to and be like “oh wow they’re crazy”

ZF: As Max said we all have super different inspirations which I think makes Tomtsu kinda cool. We all like some of the same bands but we all have very distinct music tastes. So for me my biggest inspirations are math rock bands that I’m really into  like Covet, TTNG bands that Max probably hates. Also, new funk/soul bands like Hiatus Kaiyote is a big one for us.

BH: What is the thought process behind your songs?

MG: That is, in a way, a little bit of an oxymoron because a lot of our songs come from not thinking or thinking too much. I feel like sometimes we’ll write a song and will generally start out with a lick and say “check this cool idea out” and we’ll all think it’s kind of sweet and we’ll groove to it for a little bit and after that and we’ll be like “that’s pretty sick we need more parts now” and that’s how a Tomtsu song is created. I think the fact that we click when we jam is an important aspect of it because we can build off of each other like we do.

ZF: Usually someone will come in with a set of chords or a riff and be like “check this out I wrote this at 4 AM last night instead of doing my homework” and come in with it and here’s what it is and everyone will write their own parts to it. Then we’ll jam on it for multiple practice sessions until we have 3 or 4 ideas down and then we’ll try to formulate those ideas into strong separate sections and see how we can connect it to a song and let it form.

BH: Ok last question, what do you see yourself doing in 10 years?

MG: I’ve been thinking about this a lot actually because I need to start applying to colleges soon, but ideally I would like to continue doing music but not as a profession. It would be super cool but I doubt Tomtsu will still be together in 10 years but if it were that would be sick. As a musician I want to keep learning as much as I can. I don’t really have any goal in mind other than being the best musician I could be but I probably won’t commit fully for my lifetime.

ZF: I’m agreeing with Max again here. I’ll still pursue music but as a passion. I think I’ll definitely still be playing guitar, maybe doing some sessions in a studio, playing in a band. I also don’t want to commit full time unless I find something I’m really interested in. I’ll probably still be doing shows but definitely not touring the world. 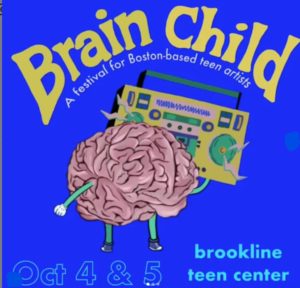 Catch them at the Brookline Teen Center October 5th for some fun times.