If you sat in for the New Year, I’d highly recommend you make the upcoming Bong Wish & Headroom (CT) show to start your 2018 off right with an all ages show at Deep Thoughts in JP. (Doors at 8)

Partied too hard? Why not let the psychedelic grooves speak for themselves & take you on an all too deserved vacation. Indifferent overall? Well, the review below provides a sneak peak at the headiest & newest of tunes inspiring you to dissolve social archetypes & become your baddest self humbly brought to you by the gnarly crew here at the Boston Hassle. 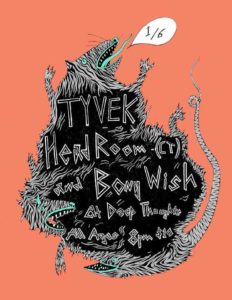 Bong Wish, Mariam Saleh’s solo moniker, released their self titled EP off label Beyond Beyond is Beyond on October 26th 2017. Learned, yet brooding with youthful whim, this 4-song EP jumps from lyrical immediacy to visceral musical scapes without leaving the psychedelic rabbit hole of Saleh, who has carved a familiar yet cuttingly truthful narrative into a definitive Boston underground voice.

‘My Love is Pure/ like the ocean floor’ ring the opening lyrics to the second track Saturn Spells, with a bridge of strings & winds that seem to come as naturally & coolly as an Autumn Wind. Not caught up by the pitfalls of similar sounds or moods of psychedelia, the song Conversations with Business People creates an artistic narrative on the streets & lends the listener the coziness of similarly felt bewilderment of cold social facts. Funky, yet obscurely alluring enough to be easily differentiated from general pop sensibilities, Saleh’s songs craft a strong, eclectic message as she moves along onto the next phase of her career.

Through everything: the quaint creation story & break of Fat Creeps, home recordings, pains of modern life, thorny emotional relationships; what separates Saleh’s art is the strong crafts(wo)manship of the music. Music that will appeal not only to people who can closely relate to the music’s sentiment… the songs are funky & atmospheric enough to invite fans who may have otherwise written off Bong Wish into a sub-genre.

Labels make music writing really easy, & for this reason & also due to my uneasiness with the label of ‘girl rock’ I hesitate to use the term. Though the music is feminine, the concept & perspective Saleh offers rises above the pigeon-holing of women in the music industry as making ‘femme-rock’ & makes a stern effort to redefine demur in music for the next generation of hipsters (yes they exist & they’re 19, wake up grandpa).

Perhaps many of you will disagree, all I am really saying through this is that this music is stellar.

Chris Hughes is a music editor & contributor for the Boston Hassle. He can be reached at [email protected] or @crsjh_ via twitter and instagram.