When looking for an album to review I knew I wanted something punchy, and lo-fi, something that could get me out of the slump of extremely monotonous shoegaze I tend to find myself stuck in this time of year, and hopefully make me 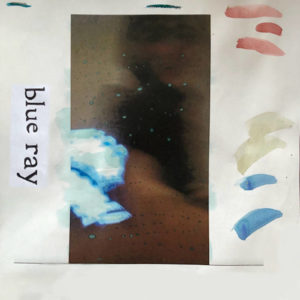 angry about something. Or just something to hop around to. Boston locals, Blue Ray did just that with Open Sesame, an album that makes me want to have a temper tantrum and then laugh about it fifteen minutes later. It’s also worth mentioning they aren’t new to this. Johnny Steines and drummer Aidan Breen released two other LP’s in 2018, and already have two more projects following Open Sesame, which came out back in May through Super Wimpy Punch. I’d recommend listening to both of those albums, Hell Hell Helmet takes the frantic energy of Open Sesame and multiplies it by about ten, a nice fast paced punk album. OFGIL on the other hand offers a more severe departure from Open Sesame, and slows things down a bit, with some impactful, narrative driven lyrics some of which are about frogs and eating Grandma’s lasagna. A personal favorite of mine “I bought 6 dachshund puppies… Eat shit and die” (It’s a very long title) is sorta comparable to the sweet sung lyrics you’d hear in a Beat Happening track. Would definitely check OFGIL out it’s great and also really funny, especially if you appreciate Open Sesame (which you will I promise, I swear (I like to use parenthesis, they make me feel witty)).

I also think I’d be remiss if I didn’t point out that their bandcamp is quality web content, a true visual masterpiece in my humble opinion (I personally enjoyed everything about their 2017 album Greatest Hits and/or Ass Bone Songs some quality song titles in that number).

But hey, back to the music because that’s what REAL rock is all about right, well here’s something that really stuck out to me. And that thing is this, Blue Ray is able to craft a moody pop song, and at the same time not turn it into a cheesy mess of self-pity, but something covered in fuzz and distortion and all those pretty sounding things that the listener can find solidarity in, and even rejoice over. Don’t ask me how they do it, I’m barely able to speak a word without finding a way to sneak some self-pity in there.

The LP kicks off with tennis, a pretty straight forward punk song, complete with some squealing guitar, but is followed by maybe the two catchiest songs on the record, “I didn’t think” and “shake shake”. Out of the two though “shake shake” definitely sticks out to me, and is one of my favorites on the album, opening up with a somber piano ballad, which gives way to a hyper mess of jangly guitars, distortion, and some nice shouty vocals. I’ve always been

a sucker for the whole loud quiet loud thing, and this song really does the trick. I was also extremely excited to find an ABBA cover on here, because let me tell you these guys do “s.o.s.” a tremendous justice. ABBA doesn’t get nearly enough credit if you axe this guy, glad to see someone doing something fun with it.

That being said, I wouldn’t consider this the type of album you cherry pick songs out of to add to your SICK spotify playlist, it definitely holds up as a cohesive collection of songs that each add to a general theme of stifled, hyper, frustration muddled in a haze of distortion. Definitely helps that none of the songs overstay their welcome, the LP is easy to listen to and is anything but a chore.

Open Sesame may not be the most dynamic of records and doesn’t offer much in the way of variation, but I like to consider that a sort of strength in this context, the band sticks to their strengths and the sound you do get is great one. Blue Ray does something with it a step above a lot of people out there. So listen to it, it’s very fun to do and sounds very very nice on your ears. You can find these guys on spotify and bandcamp so go do that, also be sure to check out their most recents Hell Hell Helmet and OFGIL, bye bye now.

Here are the other two LP’s I mentioned