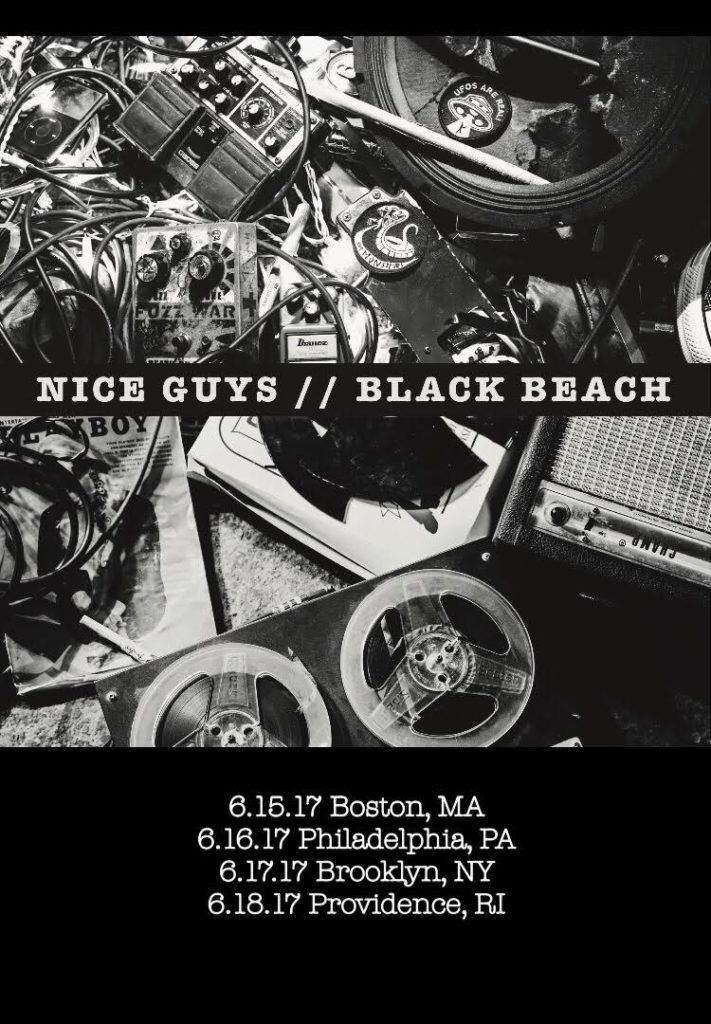 There’re some gnarly rumblings bubbling up from one of Allston’s more notorious basements – the Black Lodge – where sludge punks Nice Guys and contemporary grunge gods Black Beach lay their weary heads.  The two Boston music mainstays recorded some new tracks over the summer of 2016 and now the new split 7” is ready for consumption on June 15th aka THIS WEEK.  Mastered at home by Ben Semeta, NG’s recorded their portion at Love Magnet Studios in Roxbury while BB laid down their tracks at the inimitable Converse Rubber Tracks.  The 6 songs (four by the Guys, two by the Beach) continue in the vein of the bands previous ragers offering up what are sure to be set staples in the months to come.

Nice Guys start their side with a grinding, gut punch of an opener.  Pure cellar sludge played amidst the cacophony of a machine shop, “Grodelo” wastes no time getting to the point. The follow up “Pissin Dirty” is jerky slop rock set within a steady rhythm section before the hasty bass line of “Condos”  takes on a breakneck, punk tone over firmly stated vox.  “$94” is the most audibly accessible of Nice Guy’s side with a shout-able chorus smack dab in the middle of that slurred, fuzzy, chaotic goodness.

Black Beach take a more measured tone on their side.  “Poor Posture” slaps a militaristic bass line over the head jerking ooze rock that has been making listeners gnarl their teeth and slam their fists in approval for years now; all culminating in Steven Instasi’s shattered glass shrieks.  “Fever Dreamin” is the perfect place to end the record if you ask me.  A rough around the edges feel clashes with clean bass fills and power pop riffs – a sweat inducing, pit stomping gnarled version of rock and roll that Black Beach has literally built from the ground up.  While 90’s comparisons seem too easy, there is no doubt where these songs are rooted.  Still, Black Beach’s reworking and subsequent brutal transformation of the elements that made 80’s revolutionaries like the Melvins or the Wipers so enigmatic cannot be understated here.  I’ve said it before and will keep saying it – this is rock and roll in its purest and most honest form.

Catch both bands at Great Scott THIS THURSDAY with fellow contemporary underground rock luminaries Ovlov and The Cavemen where you can snag a copy of the split, crack a PBR, and destroy your upper vertebrae in true Allston fashion.

Liked it? Take a second to support Michael Achille on Patreon!